Zebulon Piffer was killed in a car accident in the fall of 1995.  He would have graduated from Roaring Fork High School in Carbondale in May 1996.  At the time of his death, he was preparing for a job as a Snowmass ski patrolman.

Alcohol allegedly was involved in the car accident, and in 1996, friends and classmates established a race in his memory, the Zebulon Ski and Snowboard Races.  The primary purpose of the race is to raise awareness among high school students about the dangers of drinking and driving.  All racers are asked to sign a contract for life to not drink and drive.  Race proceeds are given as scholarships to graduating seniors at Basalt and Roaring Fork high schools.

The following article was in the Glenwood Springs Post Independent newspaper of February 16, 2005:

The 10th annual Zebulon Ski and Snowboard Race is Saturday, Feb. 26, at the Snowmass ski area.

Over the past 10 years the event, in memory of former Roaring Fork High School student Zeb Piffer, has raised more than $70,000 in funding for scholarships for local students while spreading the "Don't Drink and Drive" message.

Competitors are required to sign a contract stating they will never drive under the influence of drugs or alcohol. Each competitor receives a lift ticket, lunch and a chance at prizes.

Registration takes place at the Cirque Cafe on the Snowmass Mall starting at 8:30 a.m. with races starting at 10 a.m. at the Spyder Sabbich course.

Shirts and hoodies are for sale at Roaring Fork High School, with all proceeds going toward scholarships and prizes. Information: Diane Corbett, 384-5758."

The Zeb Piffer plaque is located on the back side of a bench near the Sneaky’s run on Snowmass.  Neither the date it was installed, nor the identity of the person who installed it, is known.   Photos of it are below.

If you have any photos of or information about this item that you would like to share for use on this page, please send to the author at [email protected]. 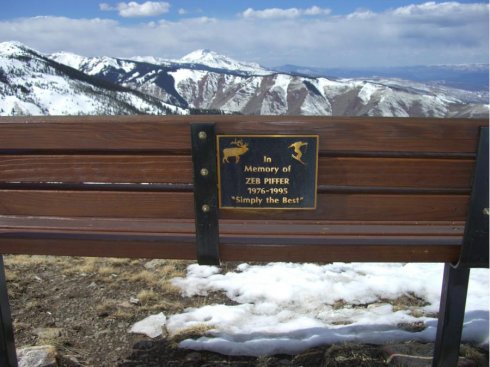 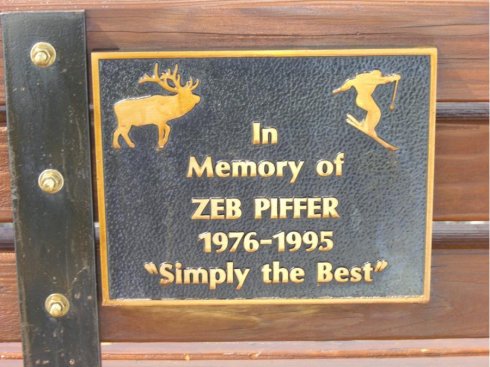 (Glenwood Springs Post Independent, March 10, 2005, by Alison Osius)
They called themselves the Rockets. Theirs was the tightest ski group that John Spencer, an Aspen Valley Ski Club instructor who keeps students for years, ever had. Zebulon Piffer skied with John for seven years.

The Rockets were the fastest group at Buttermilk. At the end of every Saturday, the seven did a "tuck run" from top to bottom, John giving them a head start and then catching them. Over the years, John also taught them manners, and the Rockets were in John's wedding.

On Saturday, Feb. 26, John spoke at the 10th annual Zebulon Race, a memorial at Snowmass now so familiar it is just called "the Zebulon." He referred to the "dark day" known to all present.

"Zeb was my best skier," John said. "He was one of the brightest flames I have ever known."

"Kids - have fun but be safe about it, figure out ways not to drink and drive. Don't let your friends. If someone wants to do it - tackle 'em!" Then he sat down at a picnic table and cried.

It was late September in 1995 when one of Zeb's friends threw a party. The youth tried to be responsible, taking away car keys, and calling a lockdown.

But one kid missed confiscation, or had a spare. Zebulon drove away, along a windy road in Missouri Heights, rolled, and died under his truck. He was 18.

The first Zebulon Race hosted 65 participants. This year saw 191, with many first-timers. Present were Zeb's parents and sister, many of his close friends, and many children. The Zebulon Committee, a dozen people including five of Zeb's peers, organizes the ski/snowboard race, and has given out $70,000 in college or vocational-training scholarships.

This year the committee is finally being taken over by "the kids" on it. Chris Hays, Jason Sewell, and Zeb's cousin Matt Piffer, with John Spencer, visit high schools and talk about the event and Zebulon. The Zebulon Race could easily have occurred, been good, and died out. Zeb's friends have kept it going.

Zeb was a great athlete, everyone says. The youngest ski-patroller-in-training Snowmass had ever hired. A soccer player, fisherman and hunter. High-energy but poised.

"Oh, Zeb could charm anyone," recalled Marti Bauer, mother of J.P. Bauer, one of the Rockets. "He talked as easily to adults as kids. He was comfortable with them."

"He looked like Tom Cruise," she added. "A blond Tom Cruise."

The six remaining Rockets come home by car and plane year after year for the event.

Today my son Teddy, 11, is in John Spencer's ski class, for the third year. John says he will name the group sometime. But there was only one Rockets.

Teddy raced the Zebulon this year for the second time, I for the first. To register, we signed pledges. His stated that in any situation where drugs/alcohol "would make it unsafe to be in a vehicle," he would phone home, to preserve "our lives together."

Mine, too, stipulated no drinking and driving, and said that if my child ever called I was to provide transportation, at any hour, no question.

All around were Zeb's friends, milling and smiling. Men now, grown, bearded; one has a child.

Years ago, we lived across the street from the Bauers, when J.P. was Teddy's age. J.P. is 27 now, has moved to Durango, and lives with his girlfriend.

Zeb's mother, Peggy Chandler, spoke at the event for the first time. She thanked organizers and participants, and then entreated: "It's awful to lose a child. It's worse than you can even imagine ... Don't drink and drive. Don't do it."

Nearby, Marti Bauer said to friends, "I remember so clearly thinking, the month before Zeb died, 'This is the kid I want to see in 10 years. This kid is so outstanding. He's going to do something different with his life.'"

Someone replied, "Well, maybe he did."

Alison Osius lives in Carbondale and can be reached at [email protected].


(Aspen Times, February 26, 2004)
Zebulon Piffer would have graduated from Roaring Fork High School in Carbondale in May 1996. At the time of Zeb’s death, he was preparing for his job as a Snowmass ski patrolman.

Instead, he was killed in a car accident on homecoming night in the fall of 1995. Alcohol was involved.

Friends and classmates established a race in his memory. The ninth annual Zebulon Ski and Snowboard races are scheduled for Saturday at the Spider Sabbich race area at Snowmass Ski Area.

The primary purpose of the race is to raise awareness among high school students about the dangers of drinking and driving. All racers are asked to sign a contract for life to not drink and drive.

Race proceeds are given as scholarships to graduating seniors at Basalt and Roaring Fork high schools, and the event has raised more than $25,000 since it began in 1996. Last year’s event included 125 racers, and organizers are hoping for especially strong participation from all area high schools this year.

Race registration takes place at the Cirque Café from 8:45-10:30 a.m. The cost is $25 with a ski pass and $35 without a pass. The cost includes racing and skiing at Snowmass, lunch and a T-shirt.

For more information or to donate to the scholarship fund, contact Diane Corbett at Roaring Fork High School at 384-5758.