The Walter's Home Run sign is on Buttermilk.  It is named for Walter Mueller who lived in Aspen for over 50 years, and was there during the time of the building and opening of Buttermilk.  He skied well past the age of 90, and also designed/built two homes on Red Mountain.  He was an icon at buttermilk along with his wife Herta.  At one time there was speculation that a run at Buttermilk would be named after him.  He and Herta passed away in the 2000’s, still in their original home on Red Mountain, and they were considered  pillars of the community.

If you have any information about this sign that would be appropriate to add to this page, please e-mail the author at AspenShrines@aol.com.  Photos of the sign, taken in April 2017, are below (click on images to enlarge). 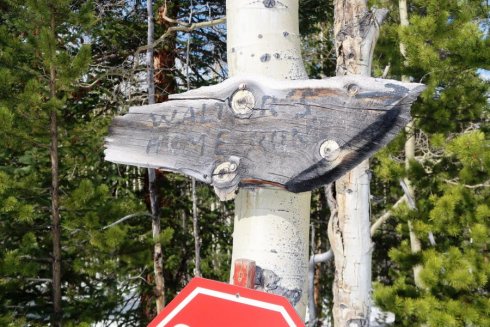