The Tom Richardson Bench is on Snowmass. He was a former President and CEO of the Aspen Skiing Company. See this page: http://www.aspentimes.com/news/thomas-w-richardson/

Thomas W. Richardson, 71, retired president of Poma of America and a former president and CEO of the Aspen Skiing Corp., passed on Thursday, June 5, 2008, at his home in Grand Junction, Colo., surrounded by his family.
Tom was born in Boston and lived in the Essex area for the first 16 years of his life. In 1954, he moved to Colorado to attend the Fountain Valley School, from which he graduated. He continued his education at the University of Denver, earning a Bachelor of Arts degree in international relations and a master’s in economics.

After his 16th year, he rarely returned East. He loved the West and was very proud to be a Westerner. In 1964 he was hired as a management trainee by the Aspen Skiing Corp. and rose through the management ranks, serving as the president and CEO for three years until his retirement in 1982.

After leaving Aspen, he consulted throughout the ski industry until he was named president of Poma of America in Grand Junction. Under his leadership, Poma became the largest manufacturer of ski lifts in North America.

Tom was very involved with the communities where he lived. He served on the Judiciary Advisory Council to the Supreme Court of Colorado and on the boards of Aspen Airways, Bank of Aspen, Colorado Ski Country (chairman), Squaw Valley Ski Corp., Mesa Land Trust and Western Colorado Congress. He also supported community organizations philanthropically.

Tom loved the great outdoors, especially the high mountains and deep desert canyons. He was a competitive long distance runner and an outstanding skier and ski racer. He and his wife of 45 years, Lynette Gotchy Richardson (of Reno), met at Loveland Basin and continued their lifelong love affair with each other and skiing; she survives him, as do their three children: Annie Richardson (David Mueller) of Grand Junction; Caroline Richardson of Toronto; and Tyler Richardson of Gunnison. He also leaves three grandchildren: Cleo, August and Molly Mueller. His brother, Daniel P. Richardson of New London, N.H., and his Uncle David Richardson of Woodstock, Vt., (formerly of Washington, D.C.) also survive him. 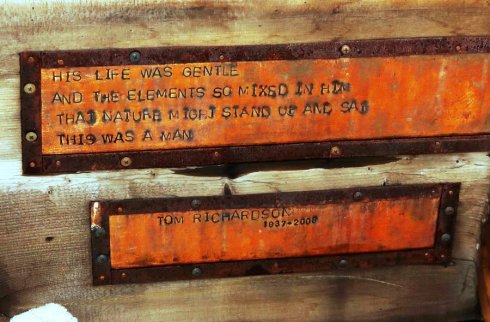