The Tim Riley Plaque and Bench is on Snowmass, on the deck at the Spider Sabich Race Arena.  He was born on July 30, 1989 and died on December 19, 2008, as a result of a snowmobile accident.

Photos of the plaque and bench are below.  The plaque reads, "Tim Riley--Snowmaker." 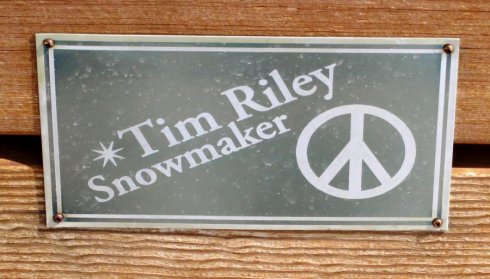 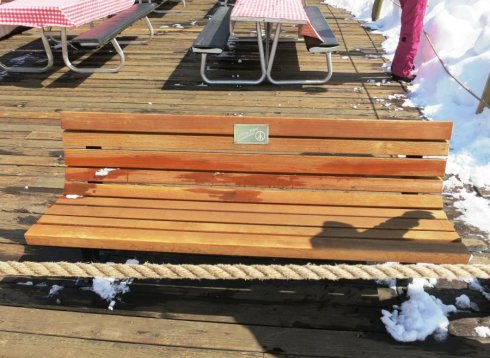 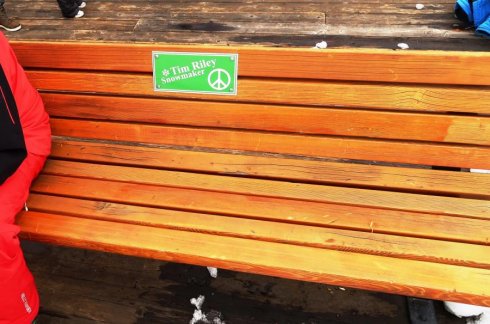 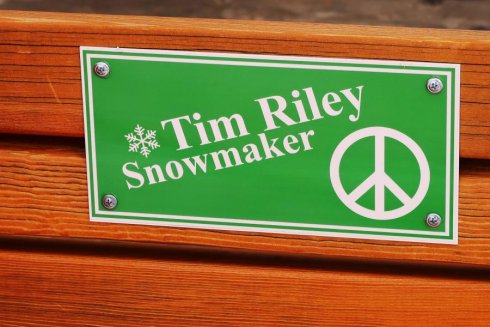 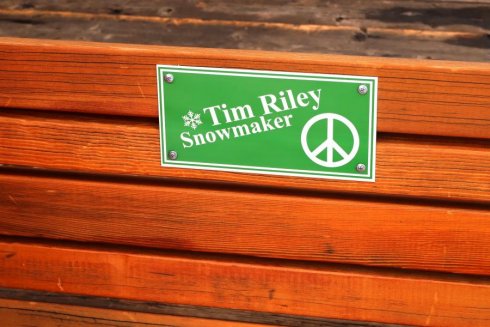 Timothy Edward Riley July 30, 1989 - December 19, 2008 Tim Riley left us to ski with the angels as a result of a snowmobile accident on Snowmass Mountain. He was 19 years old. Tim was born and raised in Grand Junction, CO. He graduated from Fruita Monument High School in 2008. He was a soccer player and founding member of the ski club. Tim worked in the construction and snowmaking industries. He was the ultimate outdoor adventurer, spending his free time climbing, kayaking and skateboarding. The Rocky Mountains were his sanctuary; skiing and jumping were his passions. Many will miss Tim's smile, friendship and sparkling personality. He is survived by his parents, Ed and Pat Riley and brother, Dylan Riley; grandmother, Mary Anne Dillenbeck; aunts and uncles including Sue Riley, Chris and Larry Morikawa, Laurie and Robbie Vaught, Linda Dillenbeck, David and Gayle Dillenbeck, Cathy and Danny Rosenfield, Stephen and Holly Dillenbeck, and Shirley and David Regonini. Tim was preceded in death by grandparents, Edward and Genevieve Riley, Donald Dillenbeck and Uncles Barry and Jimmy Riley. He will be missed by countless cousins and friends of all ages. A Celebration of Life will be held on December 29, 2008 at 2:00 p.m. at Canyon View Vineyard Church, 736 24 1/2 Rd., Grand Junction, CO. Memorial contributions may be made to The Tim Riley Memorial Fund, c/o American National Bank, 2399 F Road, Grand Junction, CO 81505. Proceeds will be used to fund youth and disabled ski programs and build a bench for resting on beautiful Snowmass Mountain, where Tim's soul took wing.
Published in The Daily Sentinel on December 26, 2008

ASPEN — An Aspen Skiing Co. employee who was seriously injured in a snowmobile crash at Snowmass Ski Area last week remains in a coma in a Grand Junction hospital, said a family friend who is hosting a fundraiser Wednesday.

Tim Riley, a 19-year-old member of a Skico snowmaking crew, was driving a snowmobile at the ski area shortly after midnight Friday when he crashed into a tree somewhere on the Hal’s Hollow ski run, according to the Skico.

After spending hours lying unconscious in the snow — those on his crew apparently were unaware he had reported to work — Riley was found by another Skico employee, rushed to Aspen Valley Hospital and then airlifted to St. Mary’s Hospital in Grand Junction in critical condition, according to AVH.

A St. Mary’s spokeswoman said on Tuesday that Riley remained in serious condition, which is considered an improvement over critical status.

According to Riley’s friend, Joe McMenimen, Riley was suffering from hypothermia when he was found, is in a coma and has developed pneumonia.

However, “doctors are positive about his condition,” McMenimen said.

McMenimen said he runs the Taqueria 85 restaurant in Snowmass and has been a friend to Riley since he arrived in Aspen. He added that he has arranged for a gathering at 8 p.m. Wednesday at the Mountain Dragon bar and restaurant on the old Snowmass Village Mall.

“We’re basically just offering up our souls, getting everybody together to think about him, have a positive thought,” McMenimen said.

He said Riley grew up in Grand Junction, and that this was his first season in Aspen. Riley was working on a night snowmaking crew at Snowmass and “living in his car” while he looked for accommodations, McMenimen said.

A fundraiser was held for injured Aspen Skiing Co. employee Tim Riley at the Mountain Dragon in Snowmass Village on Wednesday night.

Everyone from snowmakers to ski patrol to Related WestPac employees came together to support the recovery of the injured 19 year-old after he suffered severe injuries while working a late-night shift as a snowmaker last week. Riley was manning the wheel of a snowmobile when he crashed into a tree and was found unconscious in the wee hours of the morning.

The fundraiser, put together by Taqueria 85 restaurant owner Joe McMenimen, “was amazing,” he claimed.

“This was a spectacular night,” said McMenimen. “It really showed how tight this community really is. We're very appreciative.”

A rough estimate of 100 people showed up to show their support for Riley and his family, as they raised about $700 to help with medical bills.

“We're hoping to set up an Alpine Bank account to help support Riley and his family through this time,” he said. “However, I need to be respectful and speak with the family first before we set this up.”

The Aspen Skiing Co. confirmed late Thursday that Riley passed away Wednesday evening at St. Mary's Hospital in Grand Junction. He was airlifted their following treatment at Aspen Valley Hospital for injuries sustained when his snowmobile crashed into a tree in the darkness of a mountain evening.

Riley was working the third shift of snowmaking when the accident occurred. Due to the shift change and some confusion surrounding whether or not he was on duty at around midnight, Riley was not noticed missing until he was discovered at around 7 a.m. the following morning.

It's believed he was traveling at a high rate of speed when he struck the tree on a run nearby to Hal's Hallow. Riley was not using the assigned route at the time of the incident.

A fund-raiser held last week raised about $700 to defray his medical expenses.

In a statement, the Aspen Skiing Co. said, "We offer our deepest condolences to his family and friends and will keep them in our thoughts and prayers."

ASPEN — An Aspen Skiing Co. employee died from injuries he suffered in a snowmobile accident on Snowmass Mountain earlier this month.

Skico spokesman Jeff Hanle said in a statement Thursday that Riley was working on the day of the accident.

“We offer our deepest condolences to his family and friends, and will keep them in our thoughts and prayers,” Hanle said.

Riley was scheduled to work on a snowmaking crew from midnight to 8 a.m., Dec. 5, Skico said.

He apparently reported early for his shift, and after he had “punched in but had not yet signed the controller’s log, [Riley] was asked to take a snowmobile to pick up another employee lower on the mountain,” according to a previous statement issued by Skico.

Riley never showed up to get the other employee, and Hanle said the man waiting for the ride did not know who was coming for him. He also did not know to report him missing.

“While [the injured employee] was gone, there was a full shift change and the incoming shift controller and crew were unaware that he was on the mountain,” the Skico statement continued.

“Calls to his cell phone were not answered, the controller’s log was checked and the crew incorrectly assumed he did not report for work.”

Hanle said another snowmaking crew member discovered the accident, on a run known as Upper Hal’s Hollow, and called the ski patrol about 7 a.m. Riley was immediately taken to Aspen Valley Hospital, then airlifted to St. Mary’s.

He was the second person to die this ski season, locally. Cory Brettmann, 52, of Old Snowmass, was found dead Dec. 14 at the bottom of an avalanche outside the ski-area boundary on Aspen Mountain.

The avalanche, in the Power Line area, was about 100 yards long and 30 yards wide, the Pitkin County Sheriff’s Office said.