Stephen (Steve) Mirick Butts (March 31, 1956—January 18, 2005) was an avid outdoorsman, golfer, sailor, jet pilot, and expert skier.  On January 18, 2005, he died doing what he loved:  powder skiing with 14 of his friends from Telluride and Aspen in the Canadian Rockies.  He died when he was buried in an avalanche while heli-skiing in the Twin Buttes backcountry area of the Selkirk Mountains east of Revelstoke, British Columbia.  This was his 12th such trip to Canada.  The heli-ski trip was being run by Selkirk Tangiers Helicopter Skiing, Ltd.  He was 48 years old.  His nicknames were “Steve” and “Buttsie.”

For more information on Steve, and an account of the accident, see the section of this page below, after the photographs.

In October 2007 the author received the following comment:  "Dad you were the best!!!  Caroline & Kailee & Mom"

In September 2008 a person named Nyko Hackett sent the author the following comment:  "I was doing some research on Telluride today when I ran across the story telling of Steve's accident.  I was truly shocked and saddened to hear about your loss,  I had no idea.  I was a personal assistant of Steve Cieciuch's quite a long time ago and I had the pleasure of working around your father for only a short time.  But he was such an inspiration to me,  I always admired his great business sense and success.  I definitely recall watching him work and being in awe of all the things he juggled at once.  I just wanted to pass along my condolences."

In March 2009 a person named Barry Cox sent the author the following comment:  "Steve 'Buttsie' was one of my very best friends.  I was with the group when he died.  I had the priviledge of sitting in the hot tub the night before he died, and catching up on our life experiences and journeys together over the last 20 years.  Buttsie we will always miss you and remember you."

The Shrine contains many photos of Steve, two very well-constructed log benches to sit on, and a ski boot that belonged to Steve.  The shrine also contains a poem (“Aspen Day”) by Ed Cross, a copy of a program (“A Celebration of Steve’s Life”), a tribute from Andy Hanley, a note from "Peter" written on Christmas Day 2005, and a license plate that says “Mambo” on it.  This shrine was subject to some vandalism in February 2009, and some of the items menioned earlier in this paragraph are no longer there.

The Steve Butts Shrine is on Aspen Mountain.  Photos of it are below.  Also, see the additional material below following the photos.

If you have any photos of or information about this item that you would like to share for use on this page, please send to the author at AspenShrines@aol.com 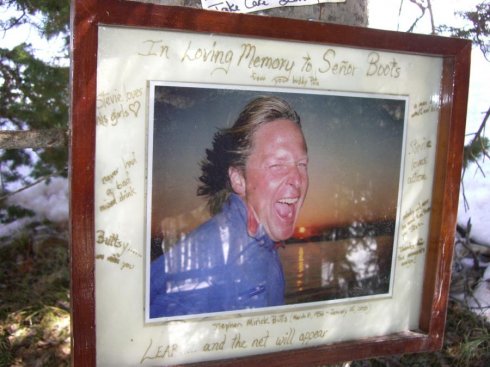 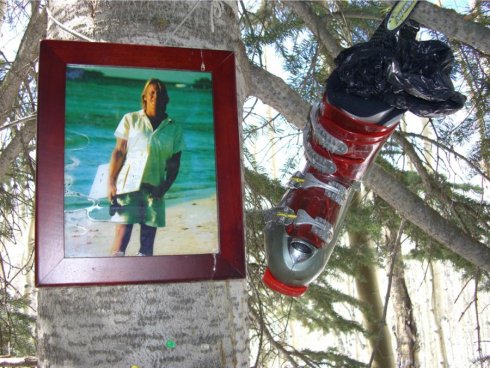 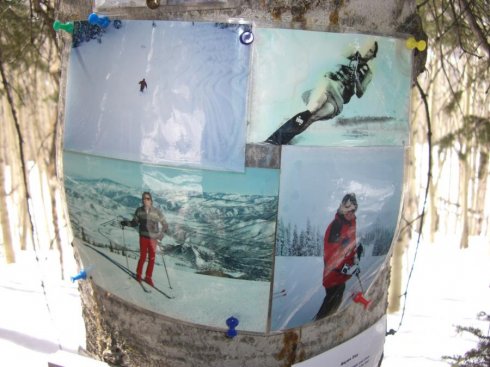 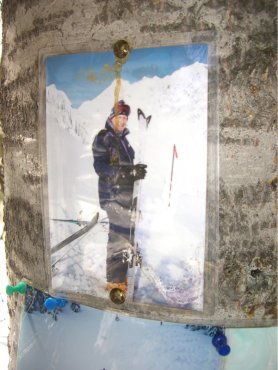 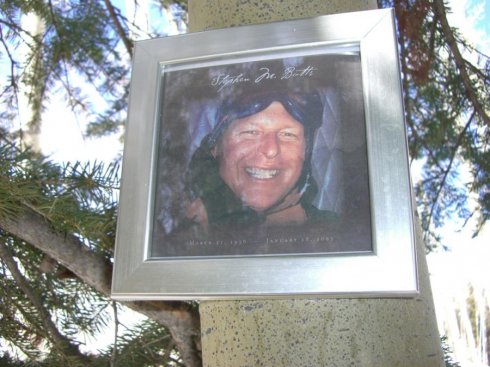 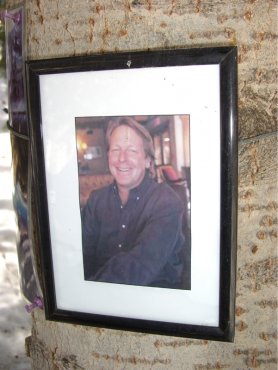 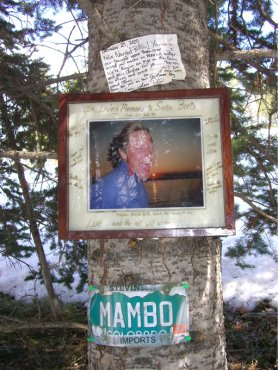 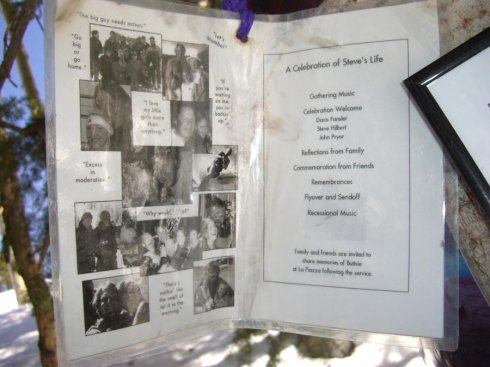 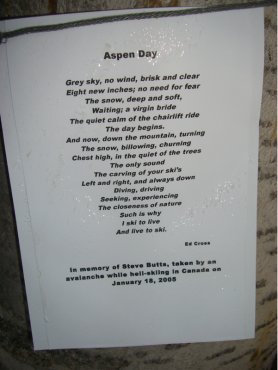 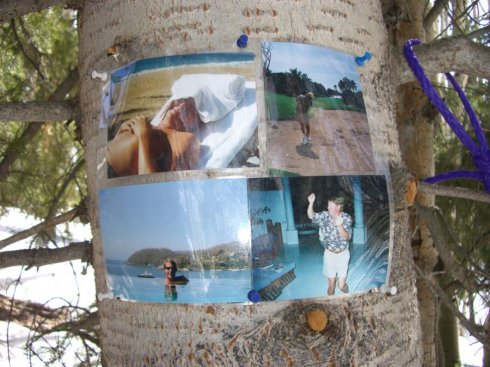 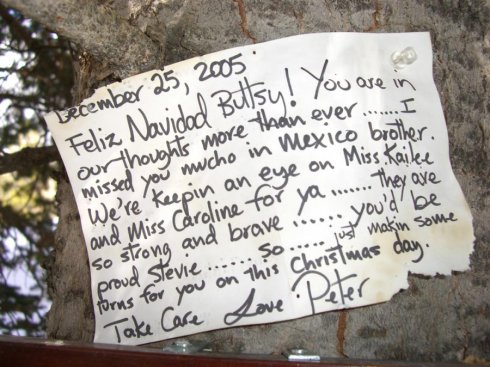 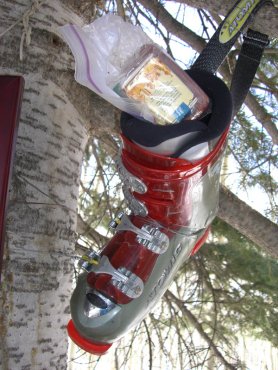 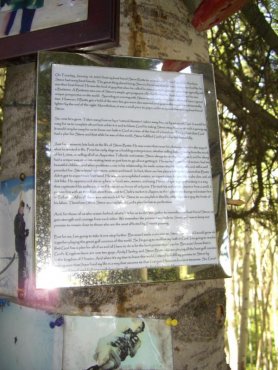 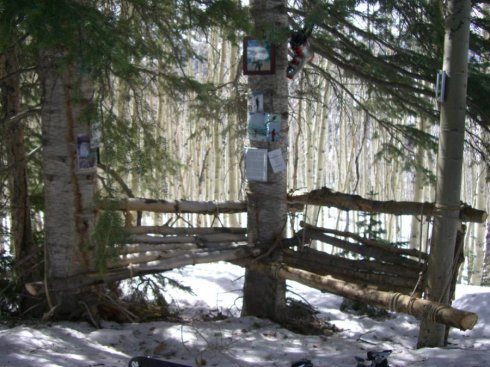 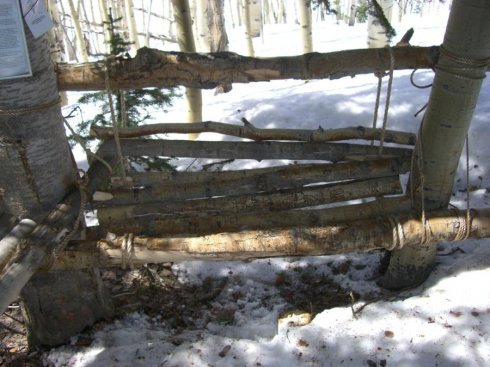 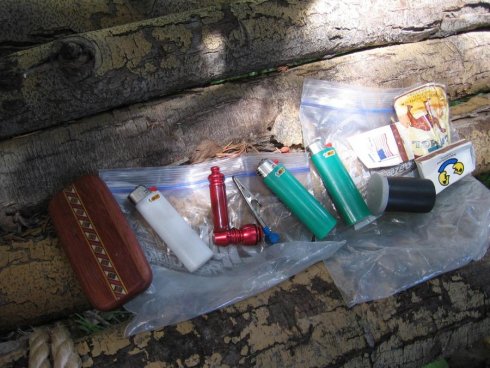 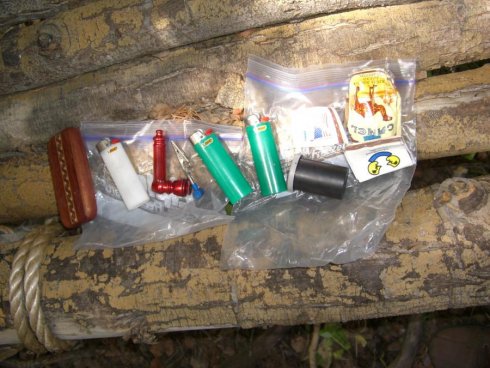 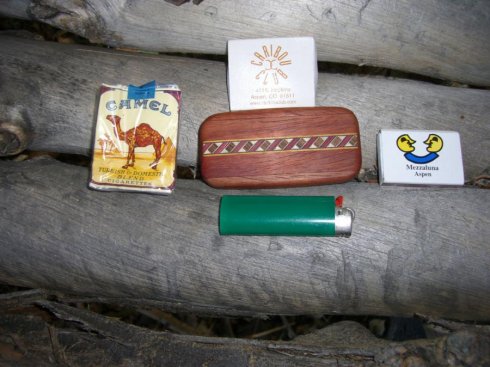 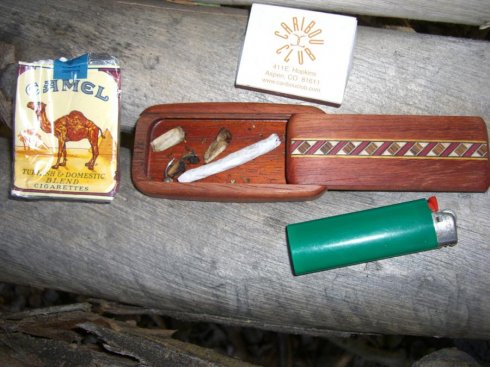 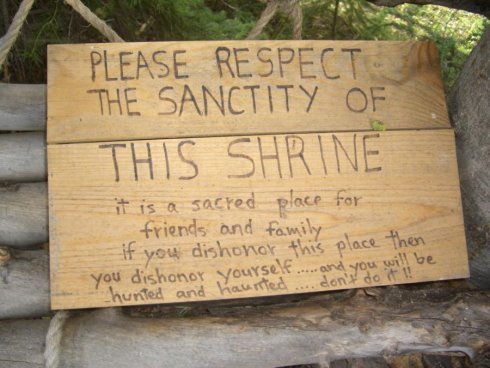 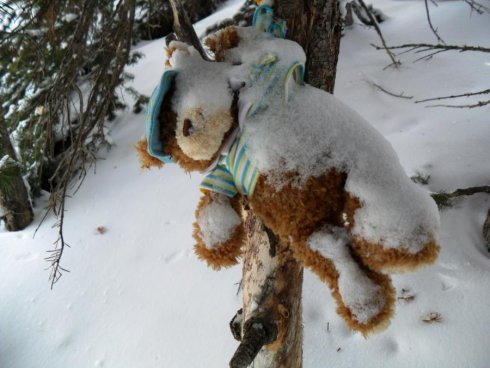 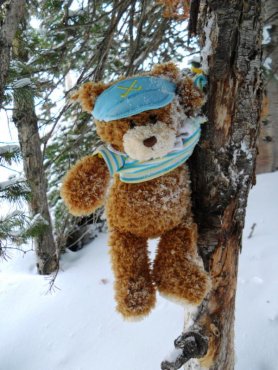 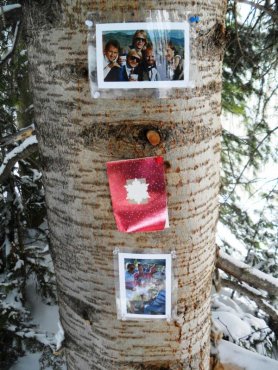 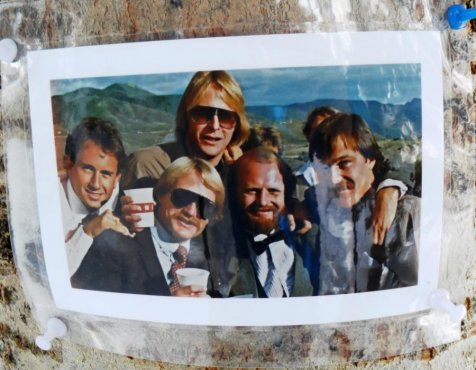 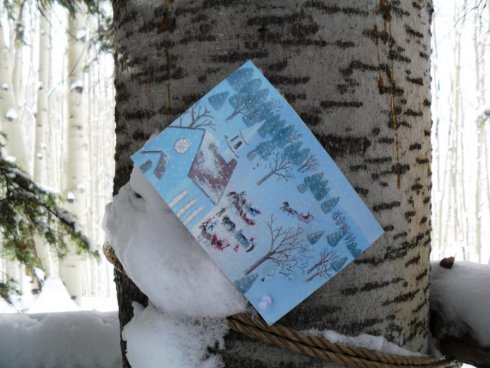 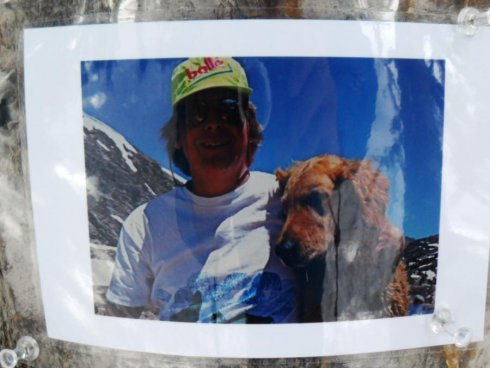 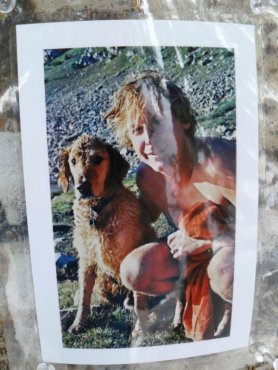 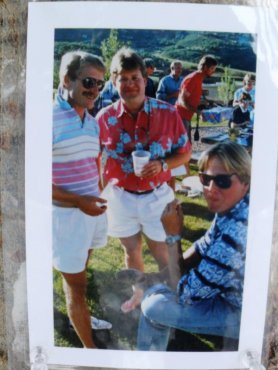 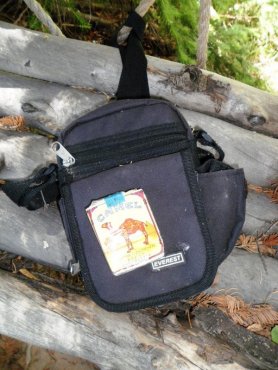 As founder and owner/broker of Telluride Properties Inc., Steve was remembered for his uncompromising commitment to quality in everything he did.  He was a savvy entrepreneur and one of the driving forces behind putting Telluride on the map in the luxury real estate world.  He lived in in the 1990’s.  Steve spent much of his time traveling the world with friends and family.  He enjoyed the finest in everything life offered, and shared this passion with all who crossed his path.  Above all else, Steve was a passionate family man.  He left behind his two beautiful daughters, Kailee and Caroline, who were his greatest pride; his former wife, Heidi Winslow; his loving best friend and partner, Amy Taylor.

In August 2005 the annual golf tournament held by the Telluride Ski and Snowboard Club (TSSC) was named in his honor:  “The Steve Butts Memorial Golf Tournament.”

This account of the accident appeared in an article ("Stephen Butts Dies in Canada Avalanche") in “The Telluride Watch” issue of January 21, 2005:

What started as a traditional January trip among a group of men to the Revelstoke backcountry grew to include the Telluride contingent after Butts moved to Telluride. This year’s trip was Butts’s twelfth.

Royal Canadian Mounted Police Sergeant Art Kleinsmith says the avalanche began “in an open area” above the skiers and swept through the trees where they were skiing. The slope angle was about 25 degrees, considered at minimal risk level for avalanches. Butts was wearing an Avalung, a breathing apparatus that did not activate. Avalanche experts plan to go in to investigate the scene when weather permits; the snowpack has been destabilized by unusually heavy rains.

According to Pryor, reached by telephone Thursday from , where the party was awaiting a flight home, the accident occurred on a run called Subaru Trees.

Avalanche conditions at the time were rated as extreme by the Canadian Avalanche Association. The decision to ski, Pryor explained, is not made by guests at the lodge operated by Selkirk Tangiers Helicopter Skiing. Instead, it is made by guides, who study the snow and weather conditions.

“Many years you don’t ski all six days you’re there,” Pryor said. “This year we didn’t ski on Sunday.”

Though there were questions on Tuesday about whether or not to ski, the decision was reached by the guides to ski a run in the trees. “But we were told it was dangerous and that we needed to be careful,” Pryor said.

Pryor was in the first group of skiers to descend the run. Butts and Steve Cieciuch went next. While a group of skiers awaiting their turn to ski witnessed the avalanche from above, Pryor saw it from below.

“The slide literally went over the back of my skis as I went into the woods,” Pryor said. The slide was about twenty yards wide.

Pryor said he believes the slide was triggered by Butts and Cieciuch while they were on a traverse, propagating a slide above them.

“Cieciuch was able to swim in the slide and keep his head up,” Pryor said. “Butts was dragged under through stands of small trees and he broke his neck.”

Within 15 or 20 seconds, after the snow settled, the surviving skiers quickly determined that Butts was missing, and they paired up, switching their transceivers to receive.

“I had a signal immediately,” Pryor said. Pryor and his partner quickly located Butts, finding a hand sticking out of the snow. They dug him out in less than five minutes and began to administer first aid.

“But there was nothing there,” Pryor said. “He was like a rag doll.”
Another helicopter was on the scene within ten minutes, with a defibrillator. But the equipment sensed no electrical signal.

Pryor later learned from the coroner that Butts had died of a fractured spine, and likely died immediately.

“Honestly,” Pryor said, “he died with his best friends, skiing his favorite run, while helicopter skiing, which is one of the greatest thrills in life.”

But, Pryor added, for him and for the others on the trip, the accident is all the more awful coming only a few years after the death of former mayor Andy Hanley, who was an annual participant in the same heli-skiing group. The commemorative Hanley Ice Rink in the Pavilion opened this fall.

The men from flew home from on Wednesday. Steve Cieciuch went with them, and underwent surgery on Wednesday night. The Telluride men remained in until Friday, waiting for the local coroner to complete his investigation of the accident, so they could bring Butts’s remains home with them.