On February 25, 2017, at around Noon, two members of the Snowmass Ski Patrol (in uniform) tore out the (old) Golf Shrine on Snowmass.  There were at least two eye-witnesses to the event (a ski instructor and an Ambassador), who said the destruction took around 2 hours to complete, and the dismantling was later admitted to by an Aspen Skiing Co. spokesman, who said that what the Snowmass Ski Patrol did when they tore out the Golf Shrine "was probably to comply with the law."  The full quote (“What he did was probably to comply with the law and how the Forest Service views these kinds of things on federal land.”) appears in this March 2, 2017 front page Aspen Daily News article by Madeleine Osberger:  "Last Round for Snowmass' Golf Shrine"  http://www.aspendailynews.com/section/home/174463   The remains of the Golf Shrine (see photo below) were carted off in a small trailer on the back of a snowmobile.  At the time the Golf Shrine removal happened, a person named Nancy J. Patton, who lives in Aspen, CO, made this comment on February 28 to a post I had made on Facebook on February 27:  "I heard that the 'new guy' who ordered the tear down of the Golf Shrine was given a 'talking to' by (Steve) Sewell (Snowmass Mountain Manager) and it will be back up soon."  A screen shot of the Patton comment is below.  The Shrine was probably the most popular and most visited Shrine on Snowmass, and many people went to social media to express their outrage at the destruction and vowed to rebuild it.  Before and after photos, and also a photo of the remains are below; click on images to enlarge.  Thanks to Gail Mason for the photo contribution.

This is the page for this (Old) Golf Shrine on this web site:
http://www.aspensnowmassshrines.com/index.php?14-The-Golf-Shrine-Snowmass

In November of 2018 a new Golf Shrine was established on Snowmass at a new location.  It is called the (New) Golf Shrine on this site, and this is the page for it on this site:  http://www.aspensnowmassshrines.com/index.php?The-Golf-Shrine-New-Snowmass   Then on April 2, 2021 the Snowmass Ski Patrol tore out this new Golf Shrine. 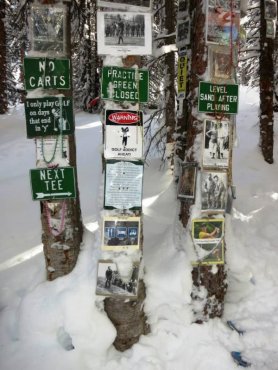 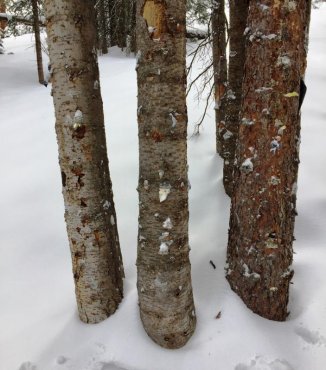 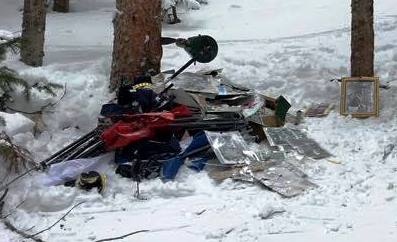 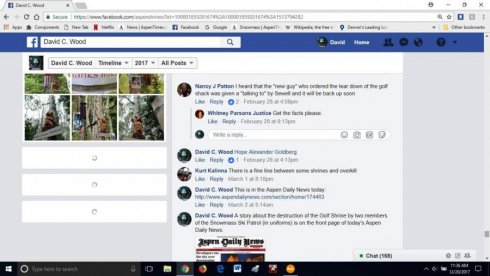