The Smoke Shacks (All four mountains)

There are a number of shacks on all of the four mountains of Aspen/Snowmass.  In some cases these shacks are what people refer to as "smoke shacks" or "toke shacks."   In 2007 there appeared several newspaper articles that mentioned the smoke shacks.  In the "Aspen's Best" article of September 1, 2007, the Aspen Times Weekley named the "Naked Lady Smoke Shack" at Snowmass as one of Aspen's best shrines.  It is not there anymore.  It was also known as the "Cough Lounge" and was a full cabin with cushioned seats inside.  Also in 2007 there appeared newspaper articles saying that various smoke shacks would be removed.  Two of these articles are reproduced below at the very end of this page.  The first article is from the Denver Post of April 16, 2007.  The second is from the Aspen Times of April 13, 2007.  The first three photos shown below appeared with these newspaper articles.

The fourth photo shown below was taken by the author in July 2008 and is of a smoke shack on Aspen Mountain on the right side of Ruthies Run, just below the top of the FIS lift.

The last five photos shown below were taken by the author in August 2008 and show a smoke shack on Snowmass on the left side of the Sandy Park run.

Links to various other shacks are below:

For photos of a smoke shack on Aspen Highlands, see the Dog Pound Shrine page on this site:  https://www.aspensnowmassshrines.com/index.php?the-dog-pound-shrine-aspen-highlands

For photos of a shack on Aspen Mountain, see The Tim Mooney Shack page on this site:  https://www.aspensnowmassshrines.com/index.php?the-tim-mooney-shack-aspen-mountain

See this page on this site for a shack near the Coffee Pot run on Snowmass.  This is known as the Gnarnia Shack:  https://www.aspensnowmassshrines.com/index.php?the-gnarnia-shack-snowmass#pid=1

See this page on this site for the Ski Patrol "Name Tag" shack on Snowmass:  http://www.aspensnowmassshrines.com/index.php?The-Ski-Patrol-Name-Tag-Shack-Snowmass.

See this page on this site for a shack near Sneaky's Glades on Snowmass (Kurt Wyhte):   https://www.aspensnowmassshrines.com/index.php?the-sneakys-glades-shack-1-kurt-wyhte-snowmass

See this page on this site for the Burnt Mountain Tepee:  http://www.aspensnowmassshrines.com/index.php?The-Burnt-Mountain-Tepee-Snowmass.

See this page on this site for the Mountain Bike Shrine:  http://www.aspensnowmassshrines.com/index.php?The-Mountain-Bike-Shrine-Snowmass.

See this page for another shack, The Brandon Zukoff Shrine (BZ Hut):  https://www.aspensnowmassshrines.com/index.php?the-brandon-zukoff-shrine-bz-hut-snowmass

If you have any photos of or information about these items or other shacks on the mountains that you would like to share for use on this page, please send to the author at AspenShrines@aol.com. 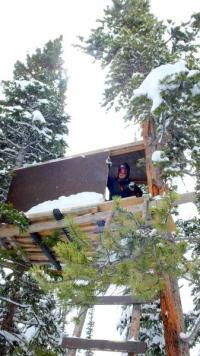 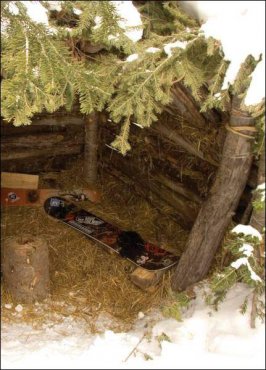 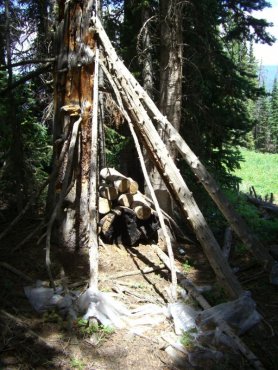 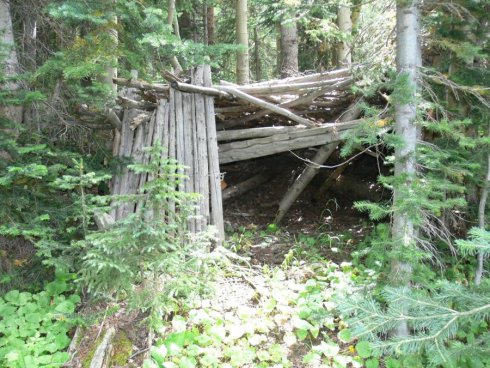 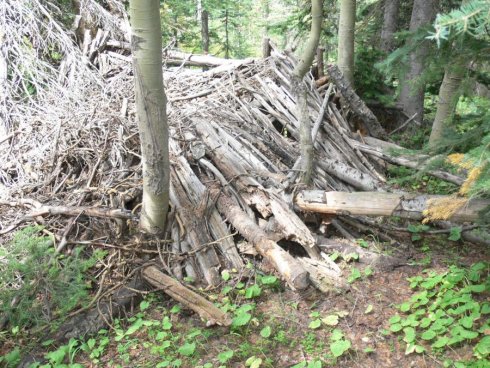 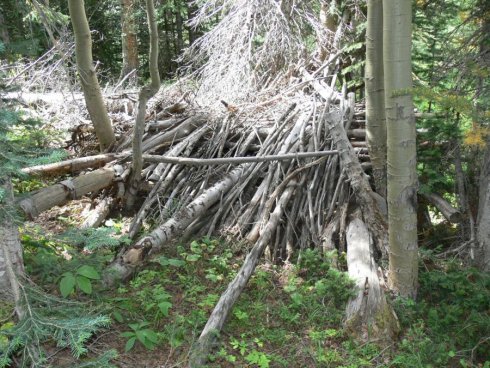 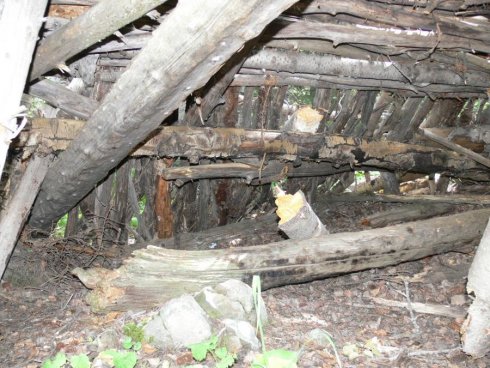 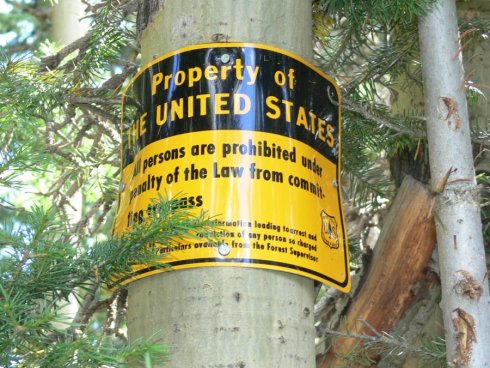 The Forest Service is putting its foot down on slopeside shacks. Those listing lean-tos tucked in the trees are being targeted by some Forest Service rangers across the state. Last week the Forest Service's winter sports administrator in called for the end of shack proliferation on Snowmass slopes.

"It's more an issue of stopping the growth of these things. Some of them are pretty extravagant," Forest Service ranger Jim Stark said. "The ski area talked to me this winter and they wanted to discuss some concerns and what we thought about their liability."

This winter, Stark and some Snowmass ski patrollers visited a newly erected shack accessed by what he called some "pretty hairball skiing." While up in the shanty, a young boy skied by with his father.

"It really is drawing some kids into places where they normally would not be," Stark said. "It's not a resource damage issue - the ones I've seen use dead trees - it's more a junk thing. Our discussion with the ski area has been if they come across them, just clean them up. We want to get the message out that this is not allowed and don't keep building these things."

Shacks on ski hills are hardly new. Some date back a couple of decades and are carefully maintained by unknown visitors. While some are tree houses found up in the canopy, most are simply stacked dead timber with room for a couple of folks to sit. More often than not, the shacks can be smelled because of marijuana smoke before they are seen.

The Forest Service does not rank the so-called "smoke shacks" very high on its lengthy list of priorities, but when a hut becomes an issue for a ski area, the Forest Service has no problem ordering its removal.

"We see them as unauthorized structures on public land," said Don Dressler, a snow ranger with the Forest Service's Holy Cross district. "It's a nuisance more than a natural resource concern."

Dressler said patrollers from Vail and Beaver Creek usually notify him when they find a new shack and he will go visit, looking for any kind of safety issue or resource damage like freshly hewn timber. It's up to the ski hill to remove the structures when they can, Dressler said.

At Mary Jane, there are more than 20 huts hidden in the woods, some built by loggers who first thinned the hill for skiing more than 30 years ago. The mountain's patrollers rarely bother with removing the storied shacks.

"There are probably more than we even know about," spokesman Matt Sugar said. "The only time it becomes an issue is when they get trashy, and that's not common. In a very limited number of cases we've had to take them down if it becomes a hazard."

____________________________________________________________________________
Reefer sadness at Snowmass
Forest Service orders removal of smoke, er, toke, shacks
Joel Stonington
Aspen Times
April 13, 2007
SNOWMASS — On Snowmass, ski-town culture is undergoing a quiet battle that no one wants to fight - one fueled mostly by liability concerns.
The controversy regards the fate of a dozen or so shacks that represent some of the coolest hangout spots on Snowmass Mountain.
The smoke shacks - or "unapproved structures" as the Forest Service calls them - are basically little hideaways to take a break and spark a joint. Most are well-hidden, with found wood and some twine, though a few have taken it to the next level with seats, multiple levels, and even iPod speakers.
"It's becoming an issue all over the place," said Jim Stark, winter sports administrator for the White River National Forest. "I was just down at Sunlight, and they're having the same issue popping up. I told [Snowmass] they need to start getting rid of them."
Skico brass says there's no problem with the shacks and that it hasn't been asked to take down the structures, but Rich Burkley, Skico's vice president of mountain operations, said the Skico would comply with any Forest Service directive.
The Forest Service said it has ordered the shacks down.
No one wants to be the bad guy in this battle.
Unlike the shrines on Aspen Mountain, most of which are on private land, nearly all of Snowmass is public land, part of the White River National Forest. Shrines on Ajax came up for review last winter when Skico execs complained that some of the shacks were just trash and should be taken down.
This year, as last, executives said these citizen creations were just "popping up" all over the place, highlighting the fact neither Skico nor the Forest Service has a reasonable solution for getting rid of either shacks or shrines.
"One man's shrine gets to be another man's trash," said Mountain Manager Steve Sewell.
"As these new ones pop up, they should be taken down," Stark said. "The ones no one knows about are not a priority. They are probably going to keep popping up. They pop up quick. Kids have a lot of time and effort to put these up. To turn a blind eye to it is not the right thing to do."
It doesn't take more than an hour to go in, nail a bunch of memorabilia, photographs, silk flowers and a pair of panties to a tree. Consummate that with a toke, and a shrine is born. Similarly, smoking shacks can be made in a matter of hours during the summer and can be easily disguised, he said.
"We're seeing stuff popping up all over the mountain," former Aspen Mountain manager Steve Sewell said in an interview last year. He since has become Snowmass mountain manager.
"We don't really appreciate it at this point," he said "One man's shrine gets to be another man's trash."
The shacks show how many people find the mountains, and ski hills in particular, an important place. Many of the shacks on various mountains are for lost relatives or heroes.
Burkley noted that if shacks are not kept up, they quickly turn into trash. At the point when everything is faded and rarely visited, he said it's no big deal to bag up the trash and throw it away.
"It would be unfair to compare those with ski area infrastructure," Stark said. "It depends on how you determine impact. It might be more about image. It's not strictly about cutting down a tree or limbing branches. The difference is that one is authorized and the other goes through an approval process."
Stark said the issue of safety has come up in discussions with the Skico. He said that while it is not the Skico's job to baby-sit everyone on the mountain, liability concerns have made the issue much larger. Burkley, on the other hand, said there is not a safety concern at the moment regarding the shacks, and the Skico doesn't even know where most of them are.
About five years ago, Stark said, a kid passed out in one of the huts on Sunlight after drinking too much and nearly froze to death. That's the worst-case scenario that Stark said must be avoided.
However, Stark and Skico execs noted the value of the shacks. Neither party said drug use in the shacks was a problem; Stark said it was clear that people have been and would continue toking in the forest, shacks or no shacks.
"Those funky things are kind of the old Aspen and add to messy vitality of the things a lot of us would like to cling on to, some funky stuff," Stark said. "That's probably why some of that is still up, both from our standpoint, the ski area's standpoint and the public's standpoint."
Joel Stonington's e-mail address is jstonington@aspentimes.com