This memorial was put in and is maintained by members of the Snowmass Mountain Ski Patrol and contains photos of and memorials to their deceased avalance dogs.  It is located in the East Bowl Chutes at Snowmass.  It is in a closed area, so only the Ski Patrol (and their friends and invitees) can gain access to see it.  One memorial here is in memory of the dog Powder Kate; on April 15, 2012 her ashes were spread here. See photo below.

For more information on Kate, see this page:

SNOWMASS AVALANCHE DOG RESCUE PROGRAM (See: http://www.snowmasspatrolfoundation.com/index.html.)  (This link no longer works, but following is what the page said.  It is not clear what date this was written.)
"The first Avalanche dog arrived at Snowmass in 1985. His name was Chopper, a Yellow lab/Golden mix. Chopper stayed here one year before moving to Aspen mountain. The following year, Kachina, a golden retriever, began working at Snowmass. China Blue, a chocolate lab owned by Barb "Hell on wheels" Iman, began at Snowmass in 1987 and worked through 1989, Ted Bennett was her handler.
Ted Bennett's first dog was "Doc" a Large male golden retriever who worked from 1988-1996, Ted was his handler and this is really when the Avalanche dog program really became an integral part of Ski Patrol, largely due to the hard work and dedication by Ted in those early years.
Steve Sewell, the current mountain manager at Snowmass brought on his dog "Rusty" to ski patrol in 1992 through 1998. Patsy Hileman was Rusty's handler. "Bernie" the mate of ''Doc" , owned by Ted Bennett began in 1994, and her offspring Chaz began in 1995.
Bubba, a large yellow lab began working in 1996, and her owner/handler was Susan Hale. Susan along with Ted Bennett worked tirelessly with the dog program, and helped make the program what it is today. Kate, a black lab started in 2005, and her owner/handler was Cre Donovan. Kate died last year on station at the Big Burn. Max, a black lab started in 2004, and his owner/handler was Charlotte Fox.  Max died last year in an avalanche near Teluride Co.
Caleb is a large and loveable black lab, who started at Snowmass in 2004. His owner/handler is Susan "Mouse" Carollo. Caleb is still working at Snowmass. Reina is a chocolate lab who started in 2006. Her owner/handler is Ben Carlsen, who works in the Snow safety department at Snowmass. Reina is still currently working at Snowmass. Dante, a small Black lab, began in 2007. Dante was killed last year in a car accident. Dante's owner handler was Nate Garfield, of the Snow safety Department. Piper, is a duck tolling retriever, began in 2011, and is still working through her avalanche dog rescue certification.
Our newest member of the Avalanche dog rescue program is a black lab named Gray. The money for grey was generously donated to the Snowmass Patrol Foundation last year after Nate's dog Dante was killed. Nate is Grey's owner and handler.
Currently the Avalanche dog rescue program has four dogs, Caleb, Reina, Piper, and Gray."

For other memorials to pet dogs and pet cats, see these three pages on this web site:

Photos of this Avi Dog Shrine are below. 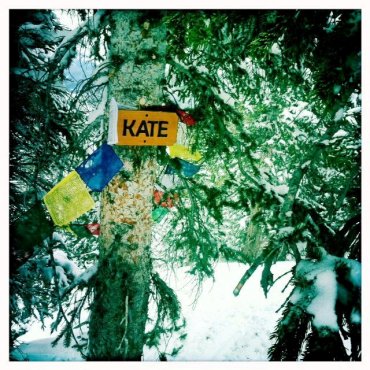