A flag has waved on and off atop the mountain for over a decade. Various anonymous people have made the climb to the rocky outcropping on Aspen Mountain’s west flank to install, move, remove and replace the flag.

Whether its recent disappearance was intentional or an accident caused by the wind isn’t clear, but that’s how it goes with flags on Shadow Mountain, said longtime local Tom McCabe.

McCabe and a buddy he dubbed “George” installed a flag on the mountain a few years ago, which was later either knocked down or removed, McCabe said.

The pair bush whacked their way up the most direct route to the spot along the steep slope, carrying pitons, a PVC pipe and ropes to support the flag, and at the top they assembled the flag pole in sections, McCabe said. One day about two years later, the flag disappeared, so George called McCabe and asked him if he wanted to help him install another one, McCabe said.

“I agreed,” he said. “But then I looked out my window and it was already up there.”

The flag, which was filmed by helicopters during the USA Pro Cycling Challenge, has been helpful to paragliders who use it to tell which way the wind is blowing, McCabe said. Still, he’s heard rumors of some locals complaining about it, he said.

“Somebody seemed to think that [Shadow Mountain] was their territory and they took umbrage to it,” McCabe said. “But, you know, if a flag stays up for a while ... that’s all good.”

Further up the ridge, there is a piece of green mesh fencing tied to a pole to serve as a flag, which was erected recently, and like its predecessors also can be seen from downtown Aspen.

The spot where the American flag formerly waved is a part of a parcel of land that was once the private property of longtime local Hans Gramiger.

Gramiger, known as a man with a dream that never was realized, tried for years to build a restaurant, which he would have called On The Rocks, at the peak of Shadow Mountain overlooking downtown Aspen.

Along the Little Cloud Trail that goes up the mountain, hikers can see remnants of Gramiger’s plan, which are large cables that he hoped would eventually support a transport system to the restaurant.

The Pride LLC and Joan Alexander, Gramiger’s companion and caregiver before his death in 2005, currently own the land and tried to break it into parcels earlier this year but were blocked by the city. There has been no effort to restrict hikers and climbers in the area by the land owners.

On Aug. 20, local Mike Maple made the climb to the top of Shadow Mountain with his son and his son’s friends. The American flag was still waving at that point.

Over the years, Maple has made the climb to the flag multiple times, he said. At one point, the flag had wires holding it up for support, but the most recent flag looked much more Jerry-rigged with rocks surrounding its base, he said.

“It’s no particular surprise that it comes and goes,” Maple said.

For McCabe, the tradition of flags on Shadow Mountain are like the shrines on Ajax, which many locals create and embrace but at the same time, they upset others, McCabe said. The flags are mostly just a product of locals having nothing better to do with their time, McCabe laughed.

And just like the shrines, he added, “they sometimes go away.” 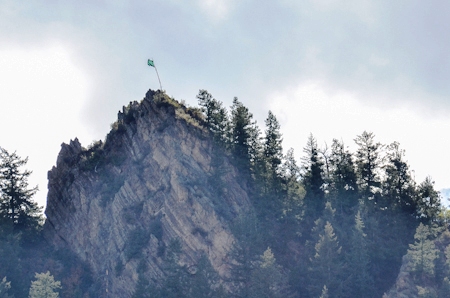 Chris Council/Aspen Daily News. A new flag made out of green mesh fencing has been erected on the highest point of Shadow Mountain.