In 1970 Roine Rowland St. Andre became the first female ski patroller ever hired by the Aspen Ski Corp. She patrolled for 29 years at Buttermilk Ski Area, serving 3 years as the patrol director. Following her death, a black diamond run at Buttermilk was named after her: "Ro's Romp." A very nice hand-carved and painted sign made of wood is attached to a tree in the area of the run.  Ro's Run is located near the Sterner Run.
This obituary and a photo of her appeared in the Aspen Times newspaper on November 12, 2010:
Roine Rowland St. Andre
May 5, 1942 — Nov. 9, 2010
November 12, 2010
The Aspen Times
Aspen, CO Colorado
Roine Rowland St. Andre, of Aspen peacefully passed onto the other side on Nov. 9, 2010 at her family home on the Roaring Fork River. She chose her path with courage, grace and humor. Roine was born on May 5, 1942, the second child of Harold “Red” Rowland and Peggy Cooper. Both of her parents were Aspen natives with roots in the town's early mining years, a heritage of which Roine was always proud. Roine's childhood was punctuated by long days romping in the outdoors, good old-fashioned neighborhood mischief, and ski racing down the face of Ajax. She was a member of the Aspen Ski Club and competed for several years with the Junior National Ski Team. Roine was named valedictorian of her Aspen High School Class of 1960. She attended Colorado State University in Fort Collins, Colo. and subsequently earned a degree in biology from Western State College in Gunnison, Colo. In college, Roine met her husband and partner of 43 years, Jon St. Andre. They were married June 5, 1967, the day following their graduation. Together they enjoyed the rhythms of mountain life; they always lived close to the land. And, whether they were summer homesteading in Sand Point, Idaho, caretaking at the St. Benedict's Monastery in Snowmass, Colo. or dwelling off-the-grid in Meredith, Colo., Roine always remained grounded in her hometown of Aspen. In 1970, Roine broke trail becoming the first female ski patroller ever hired by the Aspen Ski Corp. She patrolled for 29 years at Buttermilk Ski Area, serving 3 years as the patrol director. Roine was a dedicated worker; she “gave her knees to the mountain.” She concluded her 37 years with the company with seasons at Bonnie's restaurant, Silver Queen Gondola lift operations and Skier Services, retiring in 2007. Roine was most at home in the outdoors; her favorite places were her best secrets. Her happiest days were spent skiing lonely runs or hiking off the beaten path among the woods and the wildflowers with her dog by her side. A daughter of “old Aspen,” Roine loved her town. With quick wit and colorful critique, she never hesitated to offer her unique perspective on matters of community and culture. Roine was filled with a fun-loving authenticity which permitted her to be no one but herself. Beneath her tough skin was a compassionate heart and the hope for a better world. She is survived by her husband, Jon St. Andre of Aspen; her siblings and their families, including: sister Fleeta Baldwin of Canon City, Colo., sister Jill Boyd of Bandon, Ore. and brother Jack Rowland of Pine, Colo. A new run at Buttermilk Ski Area, Ro's Romp, will be christened in her honor; ski it in her memory. In lieu of flowers, please make contributions to Hospice of the Valley; P.O. Box 3768; Basalt, CO 81621. There will be a celebration of Roine's life for family and friends at a later date.  https://www.aspentimes.com/news/roine-rowland-st-andre/
Photos of the sign are below.
If you have any information about this item that you would like to share for use on this page, please send to the author at AspenShrines@aol.com. 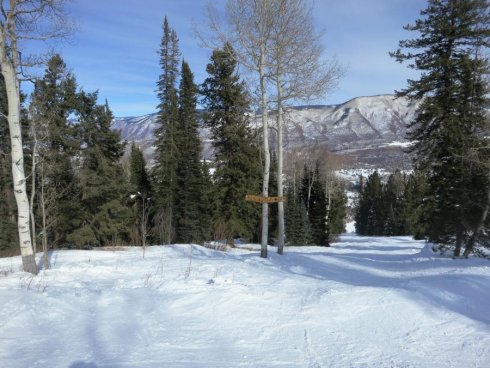 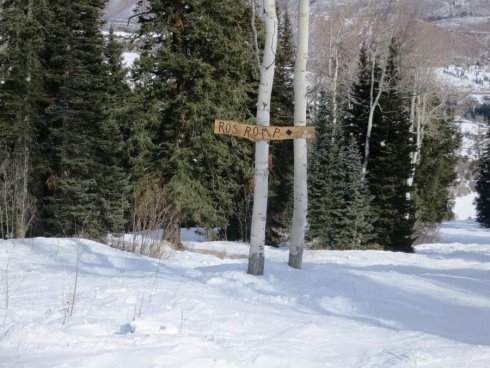 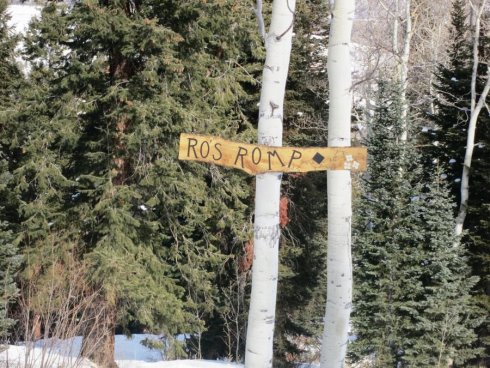 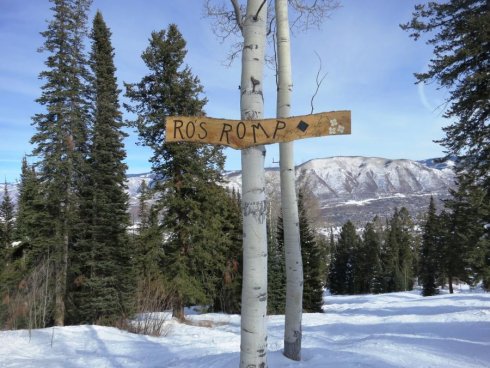 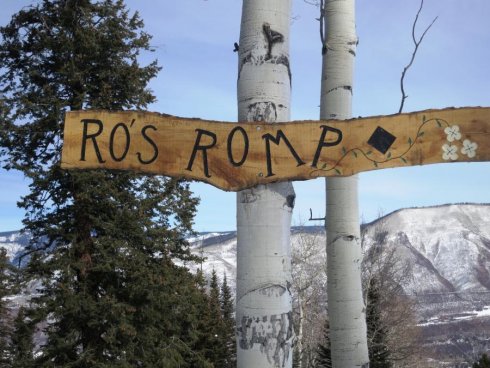