The Jugs Hill Plaque is on Aspen Highlands.  Photos of it are below.  These photos were taken in early 2013.

His full name was Col. Robert John Hill.  He was a Colonel in the U.S. Air Force and part of the Strategic Air Command.  He was born in Chicago in 1916 and died in Aspen, Colorado on May 30, 1972.  He was a graduate of West Point and a retired former commander of the 90th Strategic Missile Wing.  He and his wife Elaine had a home on Aspen Highlands where they lived for 3 years before he passed away, and he was the Executive Director of the Aspen Sanitation District during this time.  Many thanks to Kimberly Brewster, Courtney Hill-Frackowiak, Tamara Zimmerer, Lindsay Hill (granddaughters of Mr. Hill) and also Marc Demmon, for their help with the information on this page.

If anyone has any information that they would like to contribute for use on this page, please send to aspenshrines@aol.com.  Thank you.

In the section below the photos, see the obituary for Robert Taylor Hill, son of Robert John Hill.

See this page for more information on Robert John Hill, which is quoted here:  (https://apps.westpointaog.org/Memorials/Article/11320/)

Cremated, ashes over the mountains of Aspen, CO.

On 27 May Colonel Robert John Hill did something he always wanted to do—sit in a box seat and watch the Indianapolis 500. It was a good race and mirrored the pace which he had set for himself when he first entered military life at the age of fourteen at Northwestern Military Academy. Late in the morning three days later, at his home in Aspen, Colorado, Colonel Hill unexpectedly passed away; he was fifty-five years old.
"Jug,” as he was affectionately addressed by intimates, graduated from West Point in 1938 and soon after graduation headed up a family with two children, Bob and Carol, and wife Elaine. He then took over his father’s business in Chicago. His sojourn in the business world was brief, as the war had begun. Jug entered back into the life he loved the most, serving in Europe and piloting a B-24.
The war was over and post war service saw Bob Hill in Hawaii from 1947-1949, then Oregon and Utah, where he served as Professor of Air Science and Tactics from 1952-1954. From Logan, Utah, the family moved to Savannah, Georgia, and a new job—Squadron Commander at Hunter Air Force Base. Savannah was home from 1954 through 1957. The Hills were then transferred to England and three years later to Strategic Air Command Headquarters in Omaha, Nebraska, as Deputy Inspector General, 1960-1962. As all good military men do their tint in Washington, D. C., Colonel Hill’s new assignment was attending the Industrial College at Fort McNair. He also took the opportunity to get his Master’s degree from George Washington University at the same time. Ironically, there were three graduations to be celebrated—his son’s at Georgetown University, his daughter’s at the University of Wyoming, and his own—an eventful year.
From the brief academic sabbatical, it was back into operations again and this time as Deputy of Materiel at Vandenberg Air Force Base in California. From Vandenberg, Colonel Hill took charge as Wing Commander of the 390th at Davis Monthan Air Force Base in Tucson, Arizona. Then from 1966 to 1968 he was Wing Commander at Warren Air Force Base in Cheyenne, Wyoming. It was here, with the aid of his wife, Elaine, that the decision was made to buy, build, and retire in Aspen, Colorado. Colonel Hill retired from the Air Force in the Fall of 1969.
Although brief as his post retirement days were, his impact upon the town of Aspen was a lasting one. Many trees throughout the city bear plaques in his memory; the Highland Ski area named its most difficult No. 1 Trail. "JUG’S HILL”—his ashes were spread over the very mountains he skied and hiked so many times and loved so well.
It is fitting here, to mention an oft-repeated quote by Sir Winston Churchill, a man Colonel Hill most respected:
“Never give in,” he told his subordinates in 1941, “never, never, never! Never yield in any way, great or small, large, or petty, except to convictions of honor and good sense, never yield to force or the apparent overwhelming might of the enemy.” 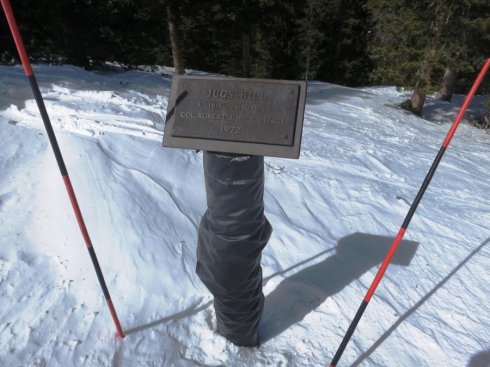 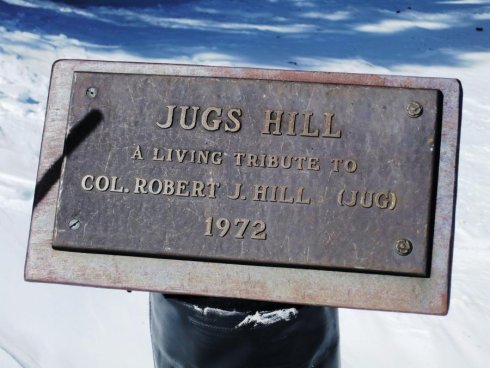 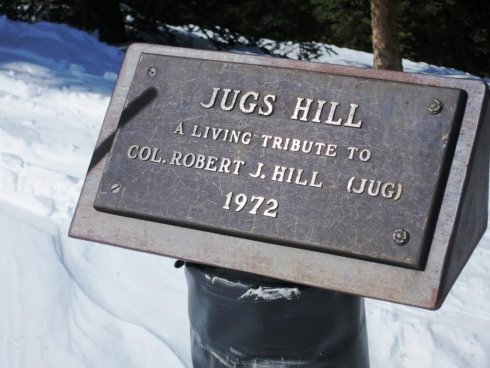 Also, here is the obituary for Robert Taylor Hill who is the son of Robert John Hill and who died in 2013 (http://www.legacy.com/obituaries/gazette/obituary.aspx?pid=165359660), Colorado Springs Gazette:  "Robert Taylor Hill.  Bob Hill of Colorado Springs, CO died pea cefully on Sunday, June 9th of natural causes. He was born May 29, 1940 in Chicago, IL to Robert John Hill and Elaine Taylor Hill. Bob spent his childhood in both the United States and Europe, where he graduated high school from Institute Montana in Zugerberg, Switzerland. Bob attended the University of Maryland, Munich, before graduating from Georgetown University School of Foreign Service. Bob also completed postgraduate work at the University of Rennes, St. Malo, France and The New York Institute of Finance in NYC. In 1963 Bob married Cynthia Bellini. During their marriage, Cynthia and Bob were blessed with their three daughters, Tamara, Kimberly and Courtney. In 1978 Bob married his second wife, Connie Zulkosky. Connie and Bob shared 32 years of marriage. They made their home in Snowmass Village, Colorado before moving to Colorado Springs, CO in 1984. Bob and Connie welcomed their daughter, Lindsay, into their lives during their marriage. Since 1999, Bob has served as Founder and CEO of Cooperative Health Services, Inc. Bob was a vivacious entrepreneur with an eternal light-hearted and optimistic spirit. Bob was an avid world traveler and was fluent in French, German and Spanish. He was a talented musician with an ear for the piano, guitar and harmonica. Bob was also a gifted skier, tennis player, fisherman and golfer. Bob was a wonderful friend and confidant. He will be remembered for the love, friendship, advice, knowledge, and humor he shared with his friends, daughters and seven grandchildren. He blessed his survivors with many great memories, love and joy. Bob is survived by Tamara & Rich Zimmerer of Newcastle, CO, Kimberly & Dan Brewster of Edwards, CO, Courtney Hill-Frackowiak & Alan Frackowiak of Steamboat, CO and Lindsay Hill of San Francisco, CA. He is also survived by grandchildren Kali Grubaugh, Zach Grubaugh, Ashtyn Dodero, Jadyn Zimmerer, Haley Brewster, Gavin Brewster, and Sam Frackowiak. Memorial services are pending."  Published in The Gazette on June 16, 2013.