This sculpture is located at the base of Aspen Mountain, near the Little Nell hotel.  There is also a brass plaque.

The following information was obtained from the Art Inventories Catalog of the Smithsonian American Art Museum, Smithsonian Institution Research Information System (SIRIS) at Ralph Jackson, The Clown Prince of Skiing, (sculpture).:  The artist is unknown.  The medium is wrought metal on a concrete foundation.  Dimentions are for the figure approx. H. 3 ft. x W. 18 in. and for the foundation approx. 3 in.x 2 ft. x 2 ft.  The description of it is "Abstract male figure wearing a large hat.  He is dancing on skis on the side of a mountain."  It is owned and administered by the Aspen Ski Company and the Little Nell Hotel, 675 East Durant Avenue, Aspen, Colorado 81611.  A nearby brass plaque reads:  "RALPH JACKSON "THE CLOWN PRINCE OF SKIING" (1908-1981) AS DIRECTOR OF THE UNDERGROUND SKI SCHOOL RALPH BROUGHT LAUGHTER TO OUR MOUNTAINS WITH HIS INCOMPARABLE SKI ANTICS AND WONDERFUL COSTUMES.  HE MADE US SMILE."  It was surveyed in September 1994, and there is a notation "treatment needed."  There is also this note:  "The information provided about this artwork was compiled as part of the Smithsonian American Art Museum's Inventories of American Painting and Sculpture database, designed to provide descriptive and location information on artworks by American artists in public and private collections worldwide.  Repository:  Inventories of American Painting and Sculpture, Smithsonian American Art Museum, P.O. Box 37012, MRC 970, Washington, D.C. 20013-7012.  Control Number: IAS CO000323."

In December 2010, GK sent the following message to the author:  "One of his ski passes complete with Ralph's photo in top hat and cigarette holder used to be in the Red Onion, deep within one of the tables by the bar."

See the book "Aspen Bummin'" by Stuart Kinkade.  On page 25 there is a poem ("King of the Ski Bums") about Ralph.  The poem is set out below.

See this page on the WildSnow site which contains a photo of a bust of Ralph, which is located near the place on Ute Avenue in Aspen where Ralph's house used to be; the house has been torn down, but the statue is still there:  http://www.wildsnow.com/1435/the-meeting-film-festival-report-1/  More photos of this bust are shown below.

Ralph is mentioned in this January 13, 1958 Sports Illustrated article:  https://vault.si.com/vault/1958/01/13/sophistication-and-snow  (Doing the math, if Ralph was 44 in 1958, then his birth year was 1914; but see the obituary below.)  "Ski instructor Ralph Jackson, a youthful 44, is self-proclaimed 'King of the Ski Bums.' Bums—the word has no derogatory implication among the ski set—are the skiers who take on available winter jobs at big resorts, asking only that the jobs leave plenty of time for skiing. Jackson taught at Aspen all winter, then disappeared in spring with the snow to tour country by bicycle. Jackson made long cigaret holder and the stocking cap his trademarks while at Aspen."

In March 2016 the author was informed that the sculpture was commissioned by Carol Euster Fuller, and that the sculptor was Ben Benedict.  In addition, Carol Euster Fuller stated in March 2016 the following:  That she was put in charge of Ralph's belongings by Mike Strang after not finding any relatives.  That she finally found one of his brothers in Massachusetts and ended up cremating and scattering Ralph's ashes over Ajax, thanks to Dieter Bibbig.  That she was given the rest of his possessions by his family and raised money for a sculpture done by Brother Ben Benedict.

Many thanks to Mary Beth Reckinger Weaver, Susan Bathelt-Jackson, and Carol Euster Fuller for their help with information on this page. 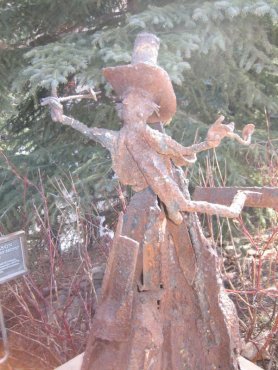 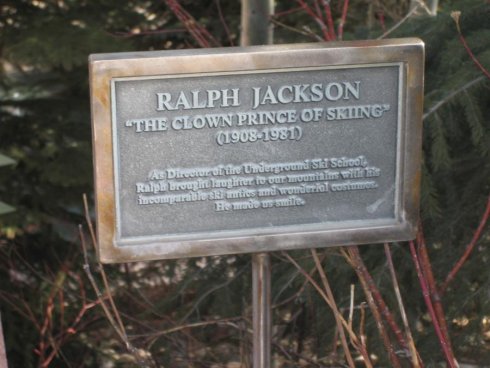 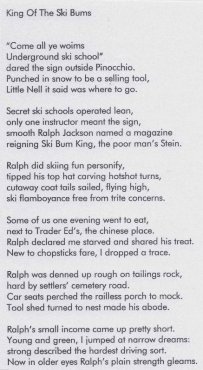 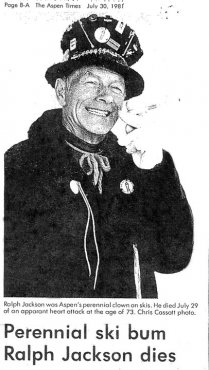 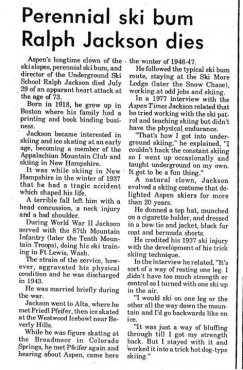 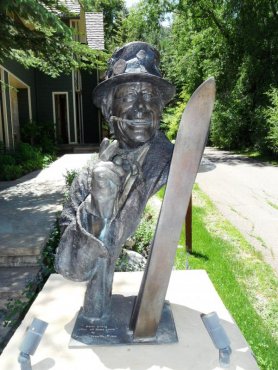 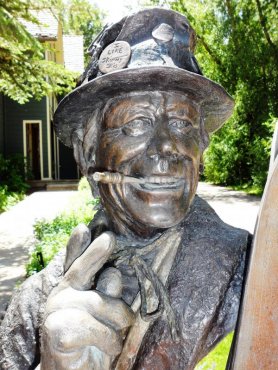 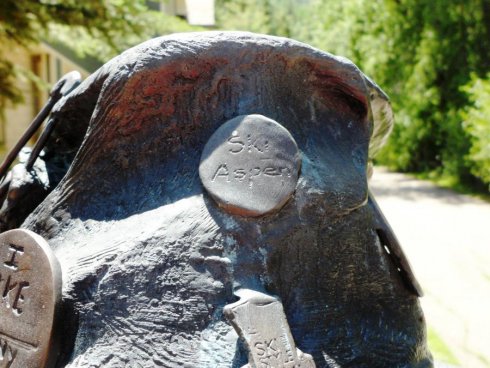 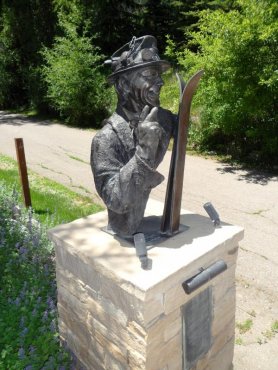 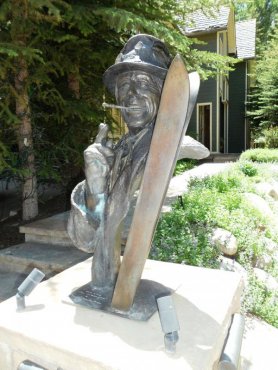 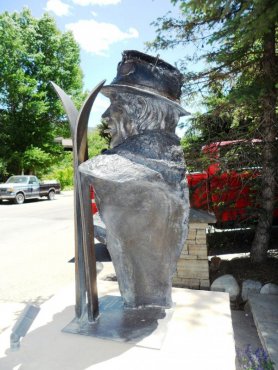 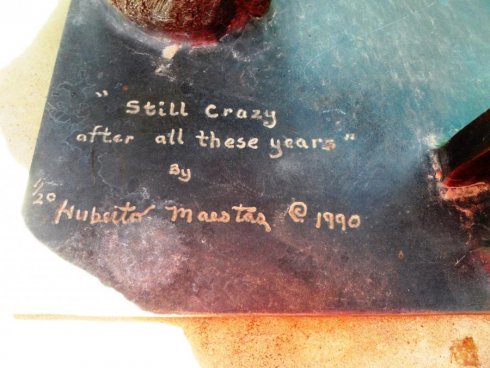 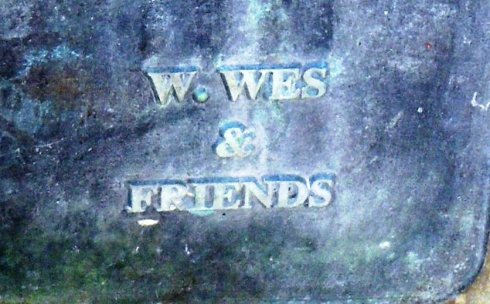 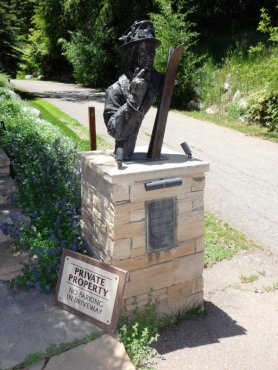 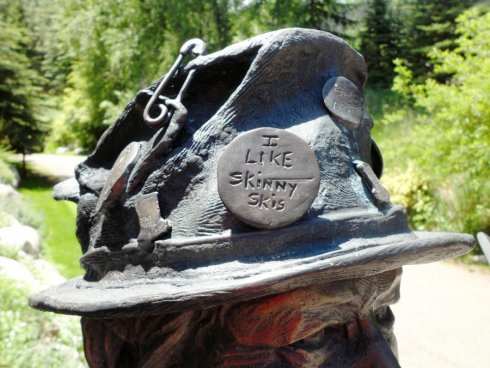 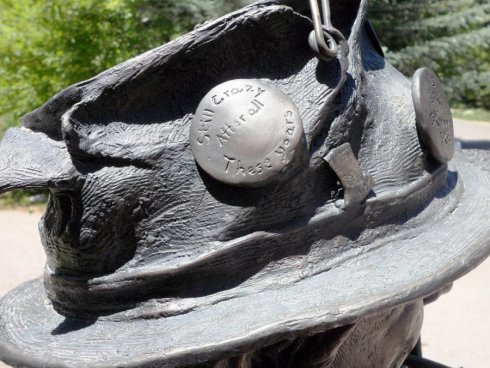 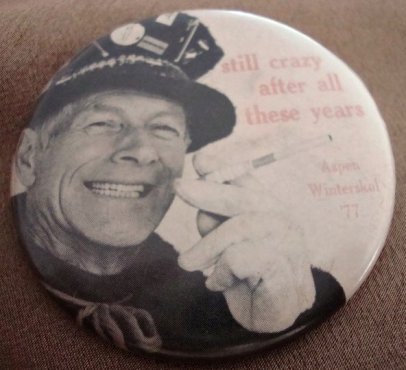