There is a brass plaque attached to a tree near the Dallas Freeway run on Snowmass.  It reads as follows:

He often came here to learn about these mountains:  climbing, hiking, camping, kayaking, skiing and flying.  His hero, pilot/author Richard Bach:  'Here is a test to find whether your mission on earth is finished:  If you're still alive, it isn't.'  Barry's mission was finished when his flying ended near Old Snowmass.  His earthly remains now rest a few feet from here, overlooking Snowmass Creek.  Just below is the Powerline mogul run he loved.  'Barry's Run.'  Bach wrote to us, 'Don't be dismayed at good-byes, a farewell is necessary before you can meet again.  'What the caterpillar calls the end of the world, the master calls the butterfly.'  He has wings again."

"A bit more background on Barry, Jr.:
He was a Vanderbilt educated electrical and biomedical engineer working for Texas Instruments in Dallas. He had a keen interest in flying, having flown with me many many hours as co-pilot.  He had earned a private pilot's license and was working on instrument and aerobatic ratings.  He had come to Snowmass (where our family has owned a condo at The Crestwood since 1970) for the July 4 holiday of kayaking the Arkansas River, enjoying the airshow at Sardy Field, and time with friends.
Just prior to leaving for home in Dallas, Barry and long-time family friend, Dave Grundfest, decided to take a short flight in Dave's beautiful Chrtisten Eagle aerobatic aircraft.  Dave and his family live in Little Rock and own a house in Melton Ranch.  Dave was a long-time pilot with military jet and private aviation background.  Dave and I had flown together since we were in high school, Dave earning his license at age 16!
They were over Old Snowmass near the Monastery, performing a loop and were seen to enter, but not complete the bottom!  Both men were killed instantly.  A tragedy that I hope few families will ever have to experience.
Following a church funeral service in Little Rock, our family traveled to Snowmass for a memorial service held atop Snowmass Mtn.  Barry's ashes were cast into the valley beside Sneaky's Run.  Shortly afterwards we placed the plaque.  We visit the memorial on our frequent trips.
I am curious who discovered the plaque.  It is well hidden in a small grove of Aspen trees.
Thank you for remembering Barry.  I hope this gives a little more insight.
Respectfully:
R. Barry Sorrells, MD"

Two photos of the plaque are below. 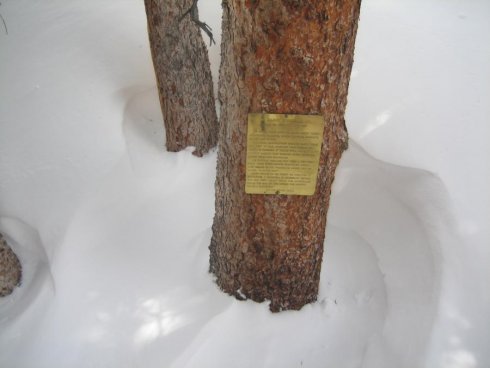 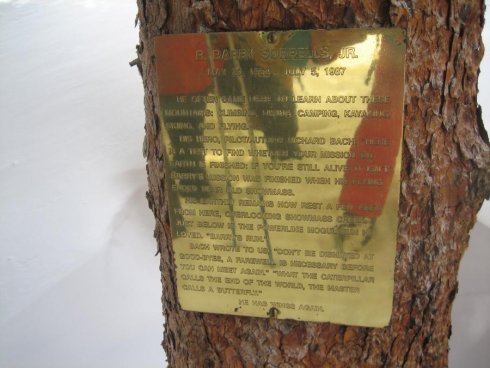 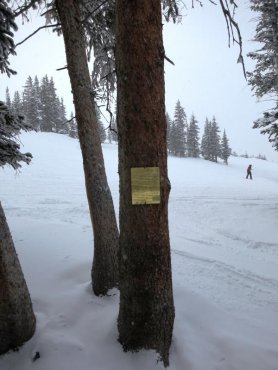 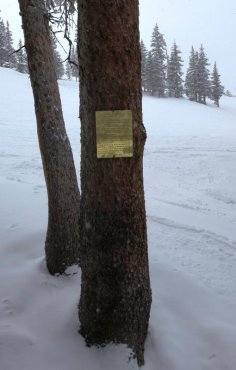 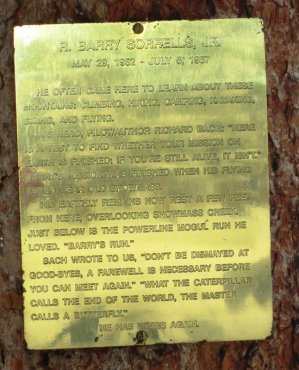 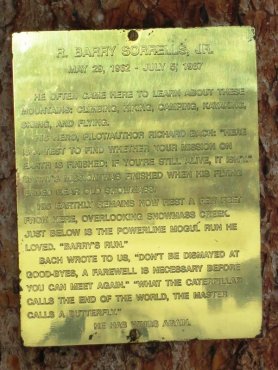