Three memorial benches at Snowmass are dedicated to Paul Krauss.  Paul died of a heart attack on May 21, 1999 while rafting on the Colorado River.  He was born on February 5, 1963 in Summers Point, New Jersey.  He graduated from high school in 1981 and Rutgers University in 1985.  He opened Sidewinder Sports on the Snowmass Mall in 1988, the first board shop in the valley.

One of the benches is on the Snowmass Mall and the other two are near the top of Burnt Mountain.  The bench on the Snowmass Mall is made of red snowboards, is located outside the front door of Sidewinder Sports, and is made from the same type of snowboard that Paul last rode.  This red bench has a plaque on it reading as follows:

"In memory of Paul Krauss.
He brought snowboarding to Snowmass and snowboarders to Burnt Mountain.
Enjoy your ride with Pablo."

The benches near the top of Burnt Mountain are best viewed in the summer, since in the winter they are covered with snow.  The benches provide a beautiful view of the Maroon Bells, and there is a brass plaque that reads as follows:

These benches were designed and built by his friend, Bryan D. Rowe (1968 - 2020). Bryan studied woodworking and design intensive programs at Anderson Art Ranch in Snowmass, Colorado from 1997 to 1999. While there, he was an assistant to Sam Maloof and Gail Fredell, the furniture design and woodworking program director. Bryan's story and woodworking designs can be found at byranrowe.com

"Friends of Paul Krauss commissioned Bryan D. Rowe to design and build a memorial bench... The two log benches atop of Burnt Mountain are humble and beautiful. They seem to suggest they are but servants to a larger creation that rests before your eyes."

Photos of all three benches are below.
See this article by David Wood in the Snowmass Sun newspaper issue of March 21, 2012, "Snowmass Memorial Shrines" which is set out in full below at the bottom of this page.
Many thanks to Bob Moyer, Kim Olmore, Rebecca Rosenberg, Brian Link, and Mark Decarlo for help with information on this page.  If you have any photos of or information about Paul or these benches that you would like to share for use on this page, please send to the author at dcwood303@gmail.com. 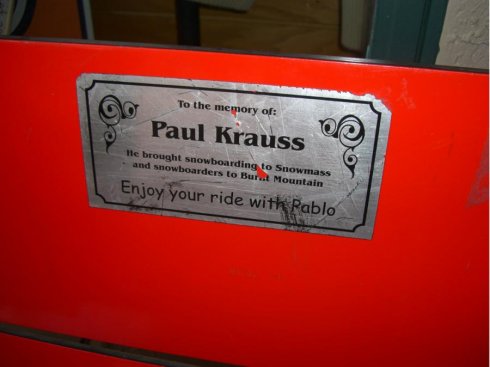 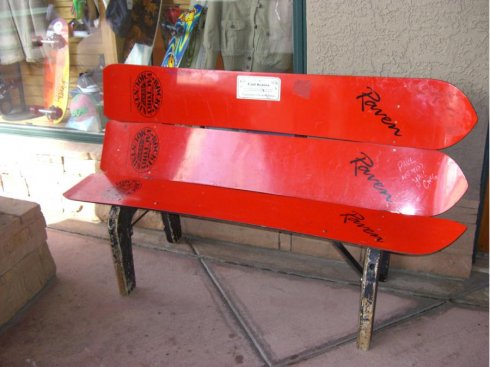 The photos below are of the bench near the top of Burnt Mountain. 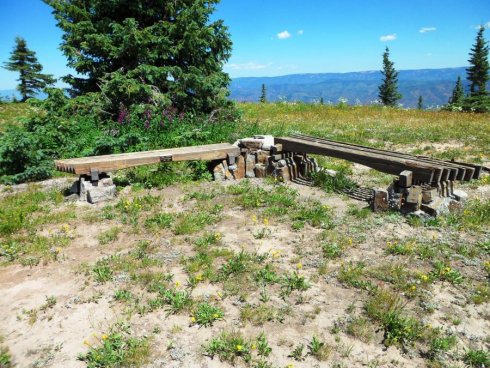 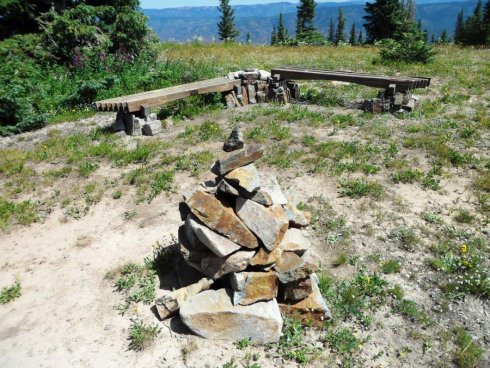 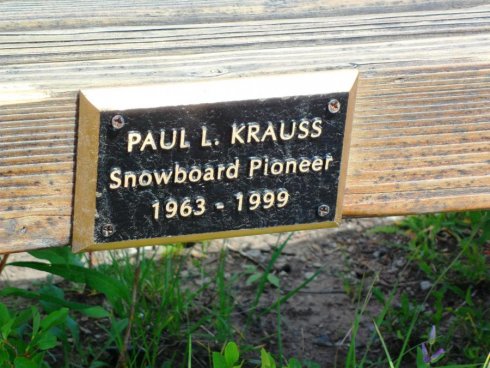 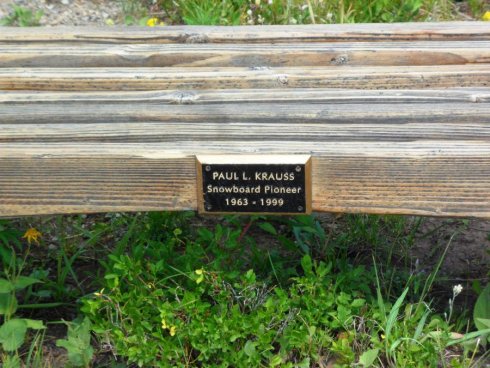 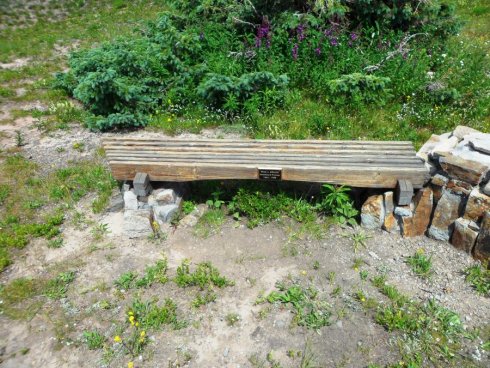 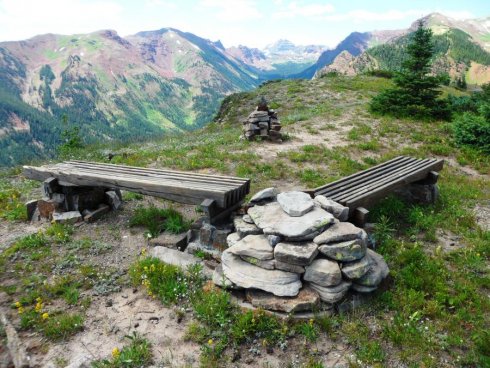 Beautiful view of the Maroon Bells. 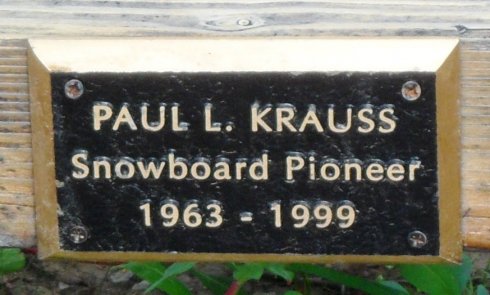 In January of 2020, Jason Beavers posted this photo along with this copy: " These rocks are the top part of a memorial for my great friend Paul Krause, he was one of the first snowboarders in the valley and cofounded the first snowboard shop in the valley.  He was a cool dude and I miss him and think of him often."  Click on image to enlarge. 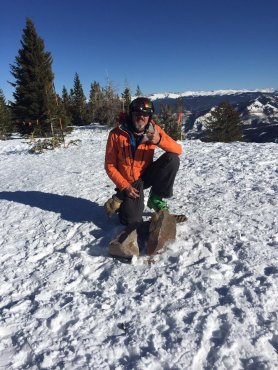 The following eight photos were taken by Bryan D. Rowe,  who also built the benches. 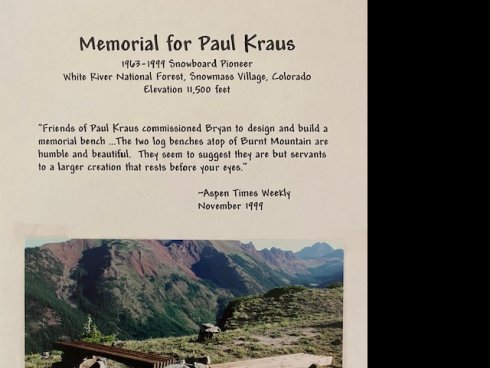 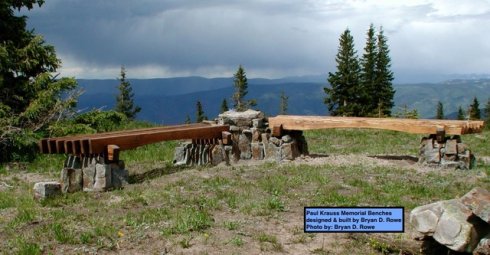 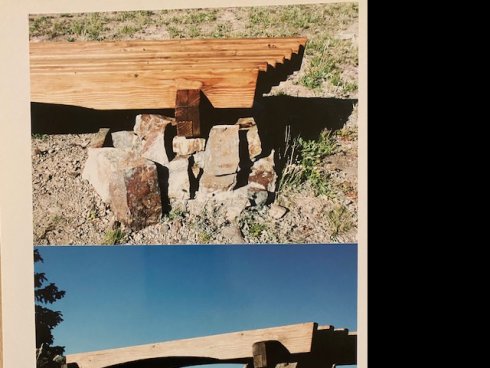 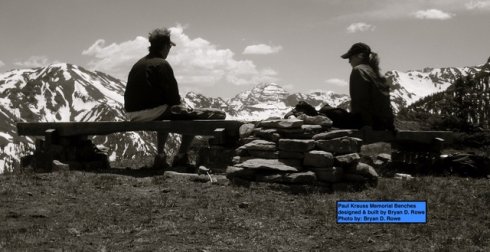 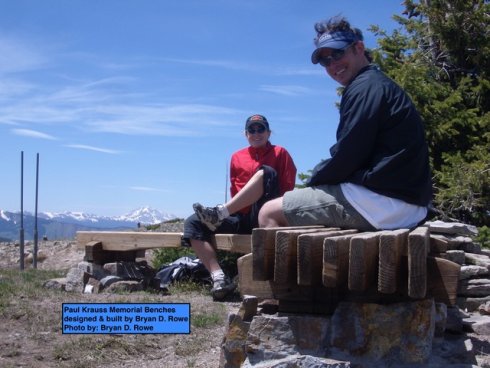 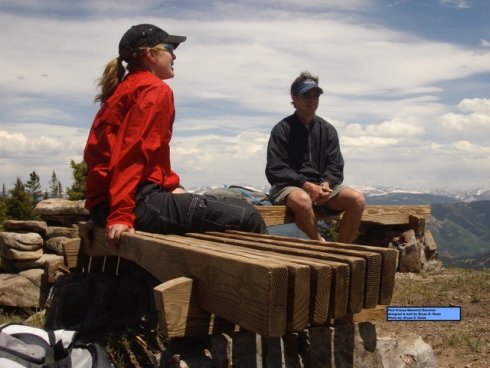 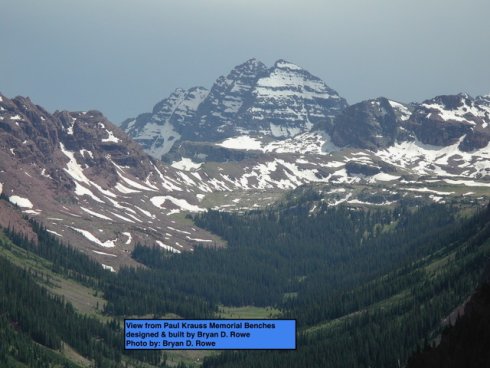 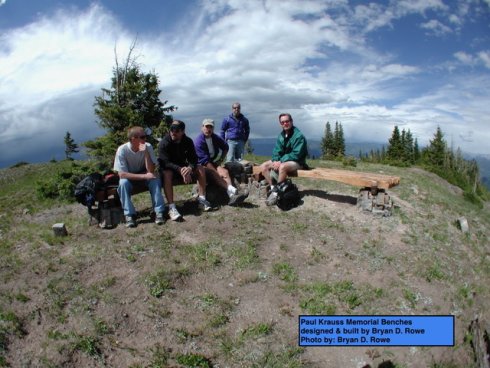 The article below mentions the Paul Krauss benches and was written by David Wood for the Snowmass Sun newspaper.

He was a grandson of Col. Harland Sanders (Col. Sanders of Kentucky Fried Chicken-KFC) and was on the board of directors of the company for a time. There is a brass plaque mounted on a tree on Adams' Avenue dedicated to him, which reads: “In Loving Memory of Harland Morrison Adams 1932-2005, Life was finger licking good, I had a great time.” Below the plaque is a laminated photo of him, in which he appears to be licking his fingers. The Aspen Skiing Co. spells the name of the run three different ways on its on-mountain signs: “Adams Avenue,” “Adams' Avenue,” and “Adam's Avenue.” On the trail map it is shown as “Adams' Avenue.”

Nicholas Blake Davidson was a Snowmass Village resident who was killed in an avalanche in the general vicinity of Rayburn's Chute on Snowmass on Dec. 21, 2006, at the age of 25. His memorial shrine is located within a couple of hundred yards of where the avalanche occurred, and consists of a built structure, several swings hung by ropes from beams, a pair of crossed skis, a sign that says “Blake D. Skis With Me, High Society” and many other items. There is also a bench nearby with the phrase “In memory of Blake Davidson, Freedom is a Word Not Heard From Those That Own It,” carved in the seat-back. This is the last quote he posted on his Myspace page, and it is also part of the lyrics from a song called “My Cadillac” by Atmosphere, one of his favorite hip-hop groups. After his death, the Kenichi restaurant in Aspen named a sushi roll after him.

The shrine for Paul Krauss

Paul Krauss has two memorial benches at Snowmass. One is on the Snowmass Mall and is made of red snowboards and has a plaque that states: “In memory of Paul Krauss. He brought snowboarding to Snowmass and snowboarders to Burnt Mountain. Enjoy your ride with Pablo.” The other bench is near the top of Burnt Mountain and has a brass plaque on it which states: “Paul L. Krauss, Snowboard Pioneer, 1963-1999.”