The Patrick S. Virtue Plaque is a brass plaque attached to the back of a wooden bench.  The bench is located near the Powderhorn run and the Ditch trail at Snowmass.  He was from Salisbury, NC and attended the University of Colorado at Boulder.   He was killed in a car accident in the summer of 1989 en route to Myrtle Beach, SC.

This material appeared in the Aiken (South Carolina) Standard on June 12, 1989, on page 11:  LOCAL FRONT, Briefly Weekend Accidents Claim Lives Of Six By The Associated Press.  Six people died in accidents on South Carolina roads during the weekend including two young men from Salisbury NC.  Authorities reported Patrick S. Virtue, 20, the driver of the vehicle and John 0. Reynolds III, 19, a passenger, died when their car was hit and pushed beneath a rig on Sunday, a dispatcher with the state Highway Patrol said.  The accident occurred on US 52 about 16 miles north of Cheraw in Chesterfield County. See this link: http://webcache.googleusercontent.com/search?q=cache:D65Ij19-ACoJ:newspaperarchive.com/aiken-standard/1989-06-12/page-11/+&cd=2&hl=en&ct=clnk&gl=us.

There is a "Patrick Virtue Outward Bound Memorial Scholarship" in Salisbury, NC; see this link: http://www.salisburypost.com/News/060811-GRAD-All-County-Scholars-qcd.

Much thanks to Lee Ann Reed Vold, who supplied this information:  "The bench is for Dick Virtue's son.  Dick was a Snowmass Town Councilman in the early 2000's.  Dick and his wife Karliss, lived up in The Divide area of Snowmass Village near the Ditch Trail where Patrick's bench resides."

If you have any information on this item that you would like to share for use on this page, please send to the author at AspenShrines@aol.com.
Photos of the plaque and bench are below. 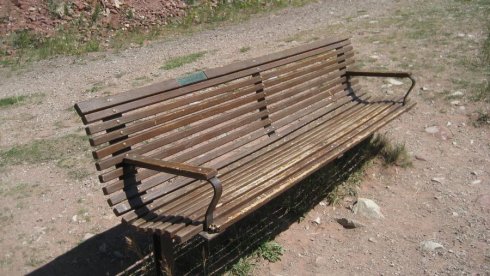 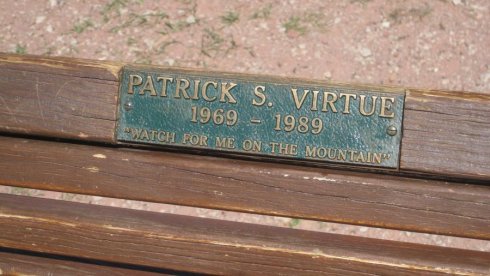 These two photos were taken in August 2017:  (Click on images to enlarge.) 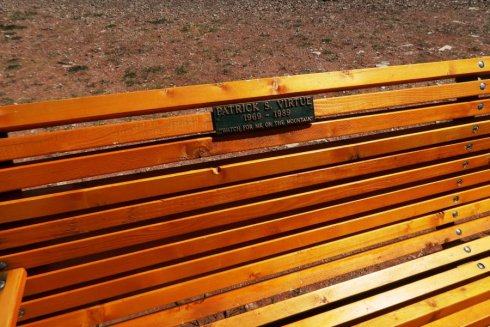 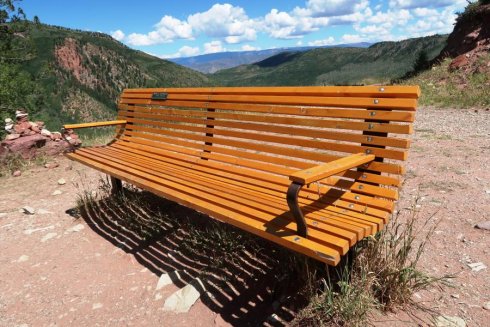