The Nor'Bert & Evelyn Fischer Memorial Plaque is on Snowmass.  I found it in April of 2019, very close to the 6th anniversary of when it had been installed (2013).  It was installed shortly after Norbert died, on May 18, 2013.  It is a dark marble plaque attached to a tree trunk.  In 2014 some of Bert's and Evelyn's ashes were sprinkled at the base of that tree.  The plaque states as follows:
"Let's go skiing along together"
Nor'Bert & Evelyn Fischer
Still on their Honeymoon
1951-2013
Norbert was born in 1926 and died on May 18, 2013.  He was married to Evelyn in 1951.  She was born on October 17, 1928 and died on May 8, 2009.  Bert defected from the Hungarian ski team at the 1948 Olympics, co-wrote a song for the Glenn Miller Orchestra, and won $300,000 from the Ohio Lottery.  But he is best remembered as a leading proponent of downhill skiing for Ohioans and for people with disabilities.  The phrase "Let's go skiing together" at the top of the plaque was a theme song he wrote for his NBC TV show "Skiing with Bert."  When people would ask Bert and Evelyn how long they had been married, they would tell them, and then say "still on our honeymoon" which is the other phrase on the plaque.  They spent many vacations skiing in Colorado.
Many thanks to their son Erik Fischer for his help with this page.
See the four links below:
1.  http://www.bodnar-mahoney.com/evelyn-fischer/ (Evelyn obituary, Bodnar Mahoney) Norbert "Bert" Fischer defected from the Hungarian ski team at the 1948 Olympics, co-wrote a song for the Glenn Miller Orchestra and won $300,000 from the Ohio Lottery. But he's best remembered as a leading proponent of downhill skiing for Ohioans and for people with disabilities.

The widower died May 18 at the VA Stokes Medical Center. He was 87.

"He was incredibly creative," said Tom West, head of the U.S. Ski and Snowboard Hall of Fame, which named Fischer a Pioneer of Skiing. "He did whatever he could to promote skiing."

In 1930, Fischer's father couldn't find fencing equipment in Budapest to give his only child for Christmas. So he settled for skis instead. The 4-year-old loved them.

"Going down the mountains was so pretty and relaxing," Fischer told The Press in Avon Lake last year.

The boy took to ballet, too, and danced in a state company. But he hated Communist rule. He defected in St. Moritz, Switzerland. He spent a month in a holding cell and then a couple years in Switzerland and Austria, competing in races.

In 1951, he moved to Cleveland because of its big Hungarian community. He met his future wife, Evelyn Slees, at First Hungarian Lutheran Church on Buckeye Road.

He won a skiing scholarship to Seattle University. During the Korean War, he served as an engineer there, captained the Eighth Army ski team in Japan and taught skiing and survival in Colorado.

His family says he was the first Ohioan certified by the Professional Ski Instructors of America. He ran the Bert Fischer Ski School at Boston Mills and Brandywine. He also taught at Alpine Valley, the Cleveland Ski Club and elsewhere. He won several of Ohio's earliest skiing championships.

In the early 60s, Fischer became what experts consider one of the U.S.'s first teachers of adaptive skiing. He worked with designers to create the Ski-EZE, a device helping people with disabilities ski in parallel. In 1980, he led the rise of Three Trackers of Ohio, volunteers teaching adaptive skiers for free. He also organized the state's first adaptive race, drawing skiers from across the U.S. and Canada.

He wrote many articles about skiing and created a "Skiing With Bert" show that aired on more than 50 NBC affiliates. He wrote the show's theme song, "Let's Go Skiing Along Together," which later became a sing-a-long at the U.S. Ski and Snowboard Hall of Fame's yearly ceremony. He wrote the lyrics and co-wrote the music for "My Sentiment", recorded by the Glenn Miller Orchestra in 1971 in London's Royal Festival Hall.

Fischer won the Lottery in 1976 and took a few relatives and friends to a restaurant to celebrate. He didn't bring enough cash to pay the bill, but the restaurant gave him credit.

He played piano, guitar and harmonica. He liked to cook, especially Hungarian dishes such as chicken paprikash and rye bread soaked in fat from pig's hide. He spent many vacations skiing in Snowmass, Colo.

Among many honors, Fischer was inducted into the National Disabled Ski Hall of Fame and won the Golden Quill Award from the North American Ski Journalists Association. He was a board member of the Professional Ski Instructors Association.

4.  https://www.disabledsportsusa.org/sports/adaptive-sports-awards/norbert-fischer/
Norbert “Bert” Fischer is among the early pioneers and advocates who were fundamental in developing the adaptive skiing industry. During his long career, Fischer has been involved in almost every aspect of skiing, from racing and teaching to ski school.  As ski school director at Mt. Chalet in Ohio, Fischer was involved in teaching people with disabilities to ski in the early 1960s -one of the earliest programs in the country. He began by teaching disabled veterans and later developed the effort into the “Three Trackers of Ohio,” founded in 1980 and recognized as one of the best adaptive ski schools in the country. The organization is staffed entirely by volunteers and is free to students.  Fischer also worked with designers to develop helpful tools, such as the Ski-EZE, a piece of equipment that helps skiers with nerve or muscle damage retain balance and make precise, controlled turns. A former member of the Hungarian Olympic Ski Team, Fischer involved disabled skiers in competition by organizing Ohio’s first disabled ski race, which drew competitors from across the U.S. and Canada.  During his long career, Norbert Fischer has been instrumental in making skiing accessible to people with disabilities, and for this he has earned recognition in the National Disabled Ski Hall of Fame.

Many thanks to Erik Fischer for contributing, on May 21, 2019, this biography of Norbert:

"Biography of Norbert Fischer in chronological order C/O Central Line.  Born in Budapest Hungary in February 10 1926.  Bert defected from the National Ski Team after the 1948 Olympics during the Hanes Schneider Pokal held in St. Anton a/m Arlberg.  After 3 years living in Hinterstoder Austria, he received a sport scholarship to Seattle U. Washington.  After one semester, he received, with the help of Gretchen Fraser, an invitation to join Sigi Engle's Ski School.  Competed in the "Harriman Cup" representing the Sun Valley Ski Club.  During the season, he received a draft notice to enter the army by July 17th 1952.  Before entering the basic training, he got married on July 3,1952, and it lasted 57 years.  He managed to convince commanding general Holman that he could serve better in a different branch.  He received an order change from ordinance to the Cold Weather Operation 10th Mountain Division training ground in Camp Hale, Leadville CO in 1953.  His order got changed again and he was shipped to Korea for 16 months until the end of the war.  As the war ended the 8th army needed a representative ski team to compete in the 1954 Far East championship.  Under the leadership of Colonel Fraser West, a "Blagen Award" recipient (USSA highest award), Bert captained the 8th Army Ski Team with great success.  After returning to the States, he formed a traveling Ski School and the Bert Fischer Ski School come to existence, operating as such for the next 16 years.  There were no ski areas in operation in Ohio till 1961.  He also joined the only Ski Club in existence with 700 members, where he met two World War II veterans who were missing opposite legs left behind opposite end of the front.  They shared a pair of ski and boot.  During their travel they impressed other people with similar predicament.  Paul Leimkuehler, who became a prosthetic clinician, mailed, free of charge, his home made "outriggers" and therefore became the "Johnny Appleseed" of handicapped skiing in the US.  His contribution was recognized with induction of both National Hall of Fames USSA and DSUSA.  As early as 1945, Bert was also inspired by WWII European handicapped skiers, that he saw in Europe after the war ended, which inspired his work with ski schools.  When Bert opened his first sanctioned Ski School called Bert Fischer Ski School in Mount Chalet, Chesterland, Ohio in the 1961/62 season, Paul Leimkuehler's requested Bert to teach his handicapped patients as a rehabilitation program how to ski.  As such, the first adoptive program was born in the US, six years before any other program emerged.  Their vision made Ohio the birth place of adaptive skiing.  USSA Program for the Handicapped became recognized outside the US, in Europe and Japan. Bert's effort was rewarded with the "GOLDEN QUILL" award by NASJA in 1989 and with the 2000 induction into the National Handicapped Ski Hall of Fame of DSUSA.  In 1963, Bert introduced a weekly ski teaching series on TV with WAKR, then two seasons with WEWS, with a culmination in 1970 with a program on WKYC which was carried in 50 NBC affiliate stations, including NY.  The success granted an invitation for the syndicated "Mike Douglas" talk show.  In 1963, to introduce his program, he wrote a theme song called "Let's Go Skiing Along Together", which is now incorporated on the tail of Jack Turner's 2010 "Cheap Ski Movie" and become the latest tradition as a sing along during the USSA HALL of FAME ceremony.  As an ASCAP member, his other winning musical composition, "My Sentiment", was recorded live in the Royal Festival Hall in London England with the Glenn Miller Orchestra and released by Paramount, and later Columbia.  As a member of the US SKI Writers Association since 1965, his articles, edited by his wife Evelyn, appeared weekly in as many as three daily newspapers.  In 1980, by a request of USSA C, Bert was asked to organize a Midwest competition for adoptive racers.  Because of the reputation of his organization plus an FIS sanctioned event in Gilo Norway, 16 states and 3 provinces of Canada were motivated to participate, not recognizing the fact that Ohio does not have mountains!  It was the first scheduled contest on American soil for handicapped racers. They merged at the bottom of Boston Mills' 210 feet vertical and had a great time. The banquet and award ceremony was presided by Hall of Famer/President and CEO" Burt" Boyum.  It was the first and naturally the last international contest.  Bert was on one occasion a PSIA C. examiner and board member. He also had a two term presidency of USSWA, during which the organization had a convention in Calgary, CA in 1984.  This event "planted the seed" to merge the sports writers of the two countries into one organization. NASJA was born. (North American Snowsports Journalists Association)"
Regarding Jack Turner's "Cheap Ski Movie" see these two links:  1.  http://cheapskimovie.com/index.html   and 2.  https://youtu.be/glJEd42H0wI

Photos of the memorial plaque, taken in April 2019, are below.  Click on images to enlarge. 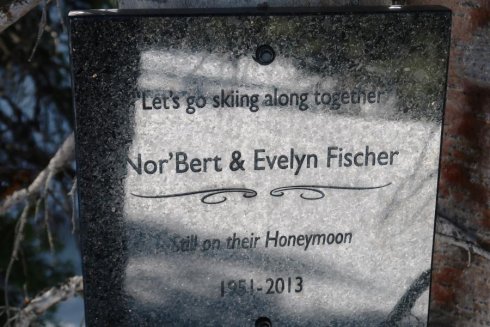 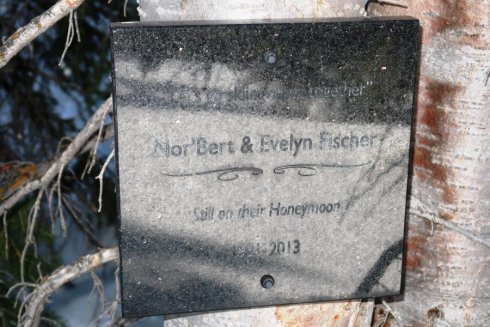 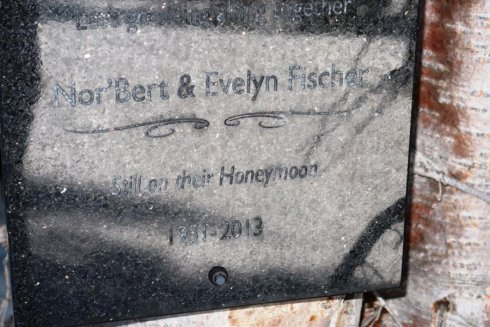 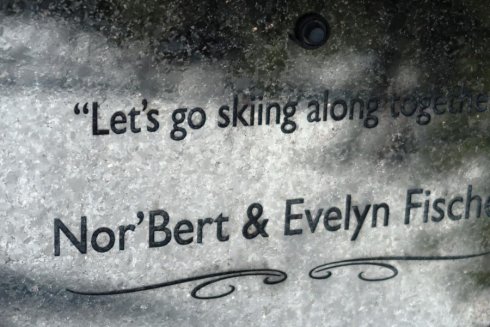 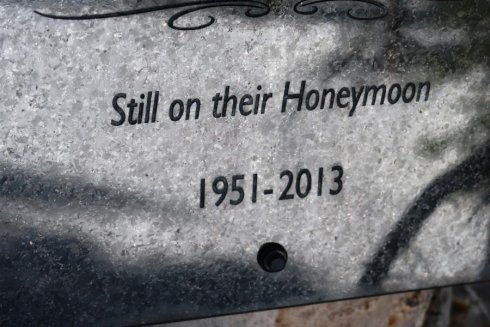 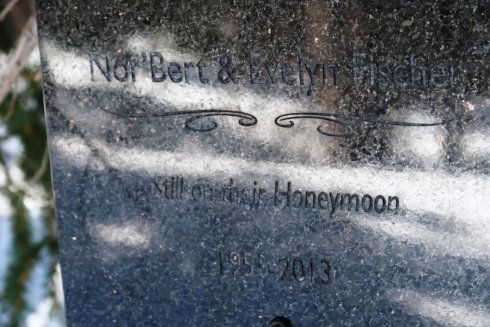 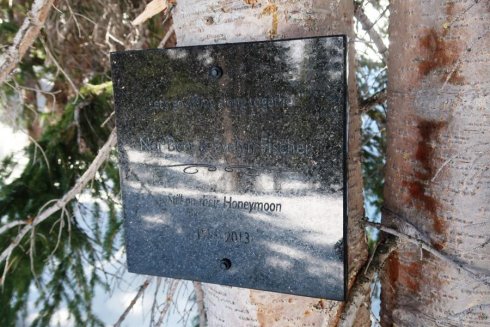 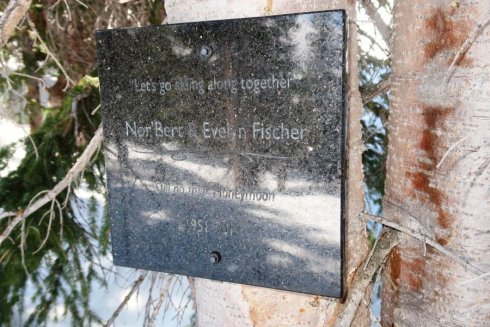