This is from the Wikipedia site regarding Michael Jackson: "Michael Joseph Jackson (August 29, 1958--June 25, 2009) was an American recording artist, entertainer, and businessman. Often referred to as the King of Pop, or by his initials MJ, Jackson is recognized as the most successful entertainer of all time by Guinness World Records. His contribution to music, dance, and fashion, along with a much-publicized personal life, made him a global figure in popular culture for over four decades. The seventh child of the Jackson family, he debuted on the professional music scene along with his brothers as a member of The Jackson 5, then the Jacksons in 1964, and began his solo career in 1971."
The Michael Jackson Shrine was installed in the trees near the Buckhorn Cabin on Aspen Mountain in the Fall of 2011 by Kathy, but it no longer exists.  It contained several large cutouts of Jackson, several laminated photos of him, some Tibetan prayer flags, a metal sign saying "King of Pop" with some musical notes, some wind chimes, and other items.
See this March 30, 2012 Aspen Daily News article, "Shrines reported missing from Aspen Mountain"   http://www.mjjcommunity.com/forum/threads/122077-Michael-Jackson-Shrine-reported-missing-from-Aspen-Mountain?p=3618039
Photos of the shrine are below.

See the article in the Snowmass Sun newspaper of April 25, 2012, "Four Former Shrines Dedicated to Musicians" by David Wood, which is set out in full below at the bottom of this page.

If you have any information concerning this shrine that you would like to share for use on this page, please send to the author at AspenShrines@aol.com. 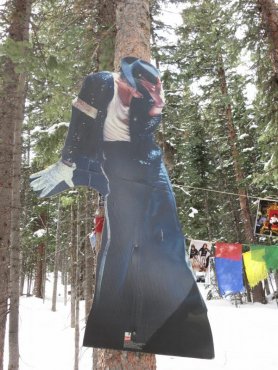 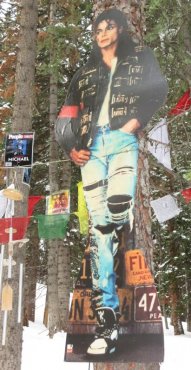 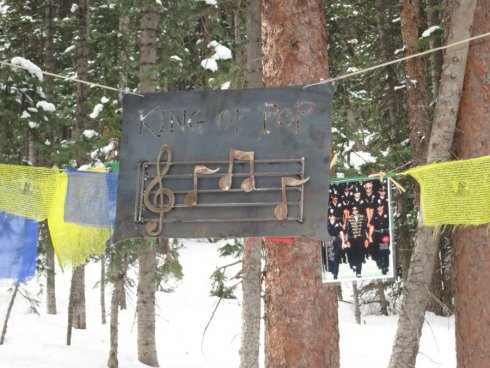 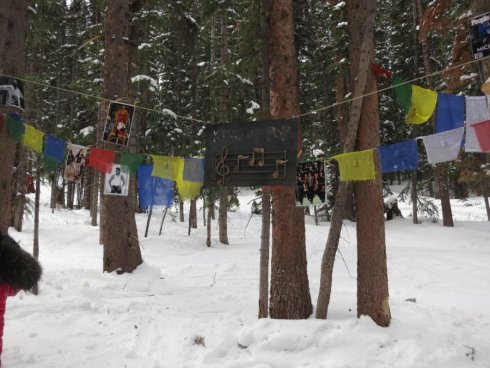 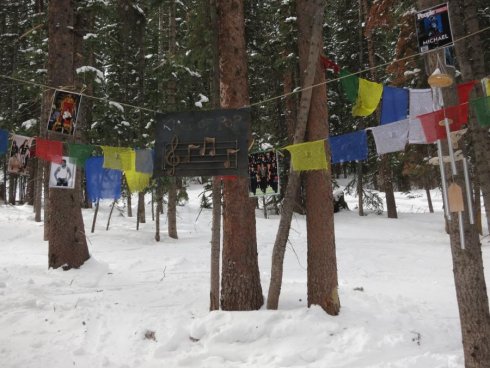 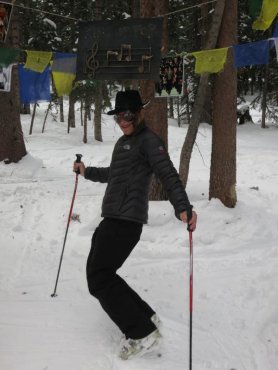 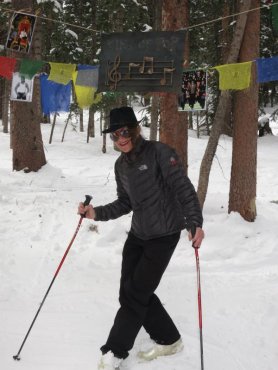 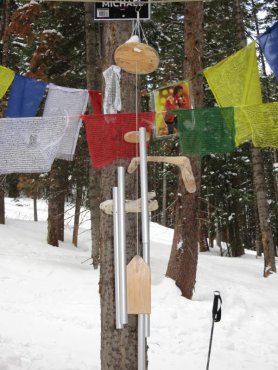 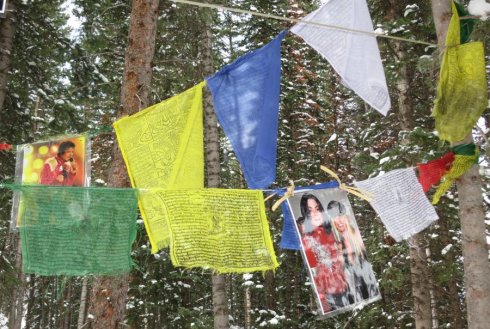 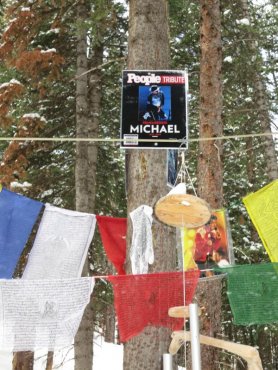 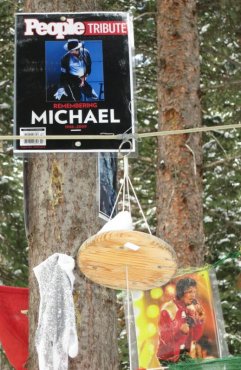 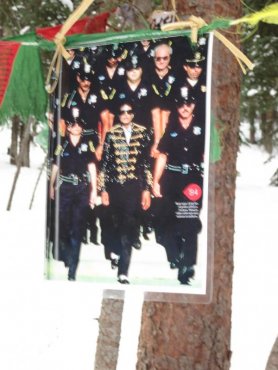 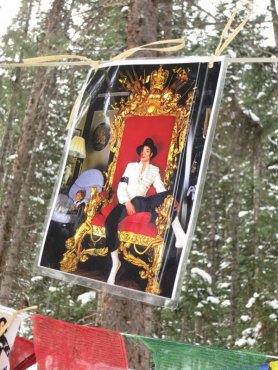 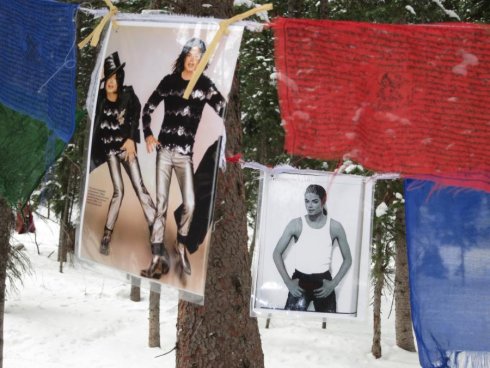 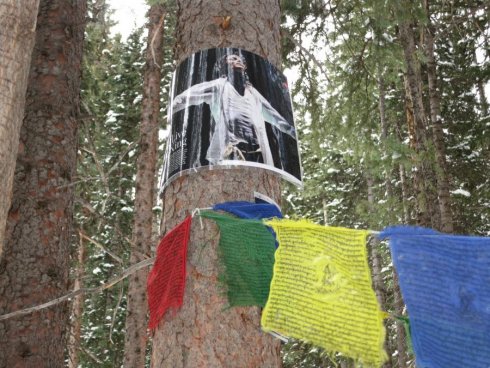 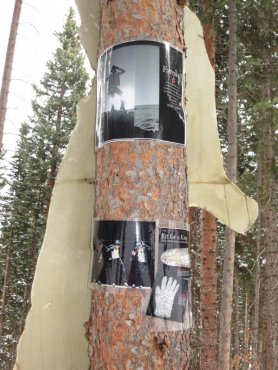 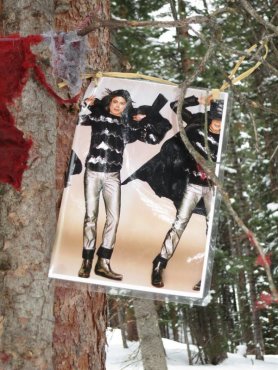 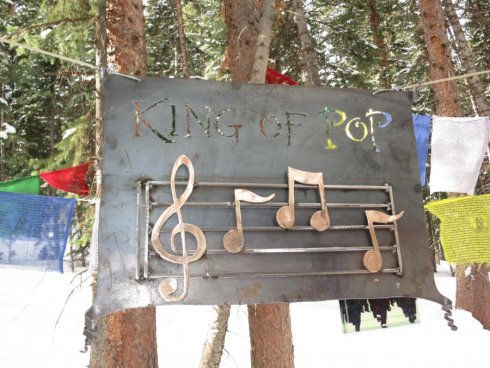 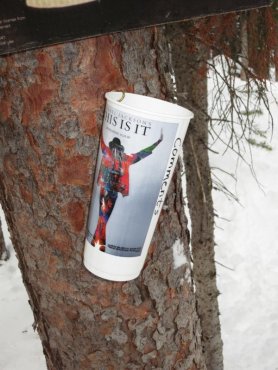 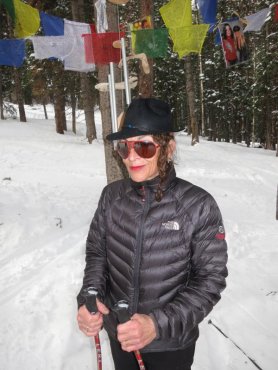 ********************************************************
Below is the article about the Michael Jackson Shrine written by David Wood and which appeared in the Snowmass Sun newspaper.
Four former shrines dedicated to musicians
By David Wood
Snowmass Sun, April 25, 2012
There are many shrines on Aspen Mountain dedicated to various musicians, including Elvis Presley, Jerry Garcia, Michael Houser, the Beatles, and John Denver. There used to be four other shrines with a musical theme, covered below, but they are no longer in existence. All four were destroyed by vandalism. The vandalism to the Stevie Ray Vaughan Shrine occurred during the 2010-11 ski season, and the vandalism to the other three occurred just last month.
The Stevie Ray Vaughan Shrine
This shrine used to be located at the cabin that was occupied by silver miner William (Billy) Zaugg back in the mining days. Stevie Ray Vaughan's name was burned into the wood over the door to the cabin (although his last name was misspelled). Also there were photos of Stevie posted on the outside and inside of the cabin and on the trees around the cabin. Some yellow roses were tacked up to two of the trees. Now there is a wooden sign over the door to the cabin that says “Bill Zaugg's Cabin, the last miner to live on Aspen Mountain.” This sign was put up after Vaughan's named was burned into the wood over the door, and partially obscures it.
The Jimi Hendrix Shrine
Laminated pictures of Jimi used to line the trees at his shrine and there used to be a yellow plastic guitar hanging in one of the trees there. There was also a street sign reading “Jimi Hendrix Pl.” This shrine was located near the stone remains of an old miner's cabin, and rails in the ground from the old rail cars are still visible in the summer when there is no snow on the ground. There was quite a collection of old skis resting against the stone wall here too. In an Aspen Times Weekly article of Sept. 19, 2009, we find this quote by Scott Condon: "Surreal scene at Hendrix Shrine. At the Hendrix Shrine itself, two walls of an old stone foundation remain from what was presumably an old mining work shack or living quarters. Rusted tin roofing and rusted metal from ancient machinery litters the ground. Someone placed an old door to a boiler or stove, emblazoned with the name of the manufacturer from Denver, high on a perch on the stone foundation. It's a surreal scene at the Hendrix Shrine, just as it should be. At the north end of the site, there is a small, fading picture of Jammin' Jimmy pasted onto the trunk of a good-sized aspen tree, juxtaposed against this ancient stone wall in the background."
The Michael Jackson Shrine
The Michael Jackson Shrine was in the trees near the Buckhorn Cabin. It contained several large cutouts of Jackson, several laminated photos of him, some Tibetan prayer flags, a metal sign saying "King of Pop" with some musical notes on it, and some wind chimes.
The Drummer Shrine
The Drummer Shrine was near the Michael Jackson Shrine. It honored deceased great drummers, including Gene Krupa, Buddy Rich, Keith Moon, John Bonham, and Richie Hayward. It included a large drum hung from a tree by a chain, a drumhead where visitors could sign in, and laminated photos of each of these drummers.
David Wood (AspenShrines@aol.com) is the author of the best-selling book about the Aspen shrines, Sanctuaries in the Snow-The Shrines and Memorials of Aspen/Snowmass. He donates all of his profits from book sales to a local charity, The Trashmasters Scholarship Fund. The book can be purchased in Snowmass Village at Snowmass Sports, the Stew Pot, Sundance Liquor and Gifts, the Village Market, and 81615, as well as at various locations in Aspen. 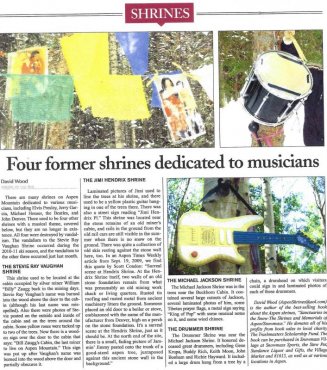