Although the Max Marolt statue is not on Aspen Mountain, it is close enough that the author felt it appropriate to include it on this web site.  It is located on the site of the Rubey Park Transit Center.

This 2003 article appeared in the Aspen Times:

This article appeared in the Aspen Times on September 30, 2003:  Aspen’s Marolt to be inducted into Ski Hall of Fame.

The Colorado Ski Hall of Fame will posthumously honor Max Marolt of Aspen on Oct. 18 during its 27th annual induction ceremony.  Marolt, who died in July at the age of 67 while on a ski trip to Chile, witnessed Aspen’s birth as a ski town. He saw the opening of the town’s first ski lift, and was one of the first to sign up for the local junior ski racing team.  Between 1951 and 1960, Marolt skied at the National Junior Meet; joined the ski team at Denver University and competed in the Olympic Games and the FIS Championships. He also created the West’s first regional ski repair and service center in Aspen in the late ’60s.  Marolt received news of his Hall of Fame induction shortly before his death, said his son, Steve. Marolt responded “like any athlete – to get that recognition, and to be included with people of that caliber – was exciting,” Steve said.  Marolt’s brother, Bill; his wife, Betty; four children, Marlis, Roger, Mike and Steve; and his grandchildren plan to attend the ceremony. After viewing a video highlighting Marolt’s many slopeside accomplishments, his children will speak to ceremony attendees.  The induction will be a bittersweet occasion for Marolt’s nearest and dearest, but one they wouldn’t miss for the world.  “It’s going to be an extremely hard evening for the family to get through, but it’s awesome, too,” Steve Marolt said.  Marolt is one of five men – and one of three men with ties to Aspen – to be honored at the ceremony. The Hall of Fame will also welcome Colorado natives Kevin Delaney, Frank Penney, Morrie Shepard and Park Smalley during the induction ceremony.... https://www.aspentimes.com/news/aspens-marolt-to-be-inducted-into-ski-hall-of-fame/

See this article about the creation of the statue, which appeared in the Aspen Journal/Aspen Daily News Online on July 27, 2004:  "Statue of Aspen skiing legend takes shape," by Thomas Watkins.

"Slowly but surely, a statue commemorating the late Aspen skiing legend Max Marolt is taking shape in a studio at the Red Brick Center for the Arts.  Known as a maquette, a foot-high version of the statue has been crafted by local artist Susan Olsen.  The miniature is a scaled-down prototype of what will eventually be a three-quarter sized bronze sculpture of Aspen's first Olympian, who died last year after suffering a heart attack while skiing at Las Leñas in Argentina.  The process of creating a bronze sculpture is a time-consuming one, said Olsen, who estimates it will take about a year from start to completion.  The statue was commissioned earlier this year by Marolt's son, Mike, and Aspen City Council agreed to contribute $5,000 to help pay for the statue, which will cost a total of $18,000.  Olsen said that the most challenging task so far has been capturing the movement of Marolt - the sculpture is of the skier carving a turn around a slalom pole.  "It's very hard, I'll tell you," said Olsen, 58, who taught art for much of her career but about eight years ago started sculpting for a living.  "I keep getting my older friends over here that have actually skied in the style of Max Marolt.  We have to make sure the pose is right."  She added that attaining a facial likeness is difficult when working only from a photograph.  Once she has gotten final approval for the maquette, Olsen will then sculpt the full-sized version of the statue, which will be about 51-inches tall.  She said that she will use an oil-based clay, which will be shipped to a foundry in Paonia.  Workers at the foundry will then carry out the final steps of the process, including an elaborate series of molds that will be made for several parts of the statue.  These must then be welded together, the joints between them buffed and a final patina applied to the bronze.  When all that is done, the statue will be mounted on a stone base, which will probably about 48-inches tall.  Mike Marolt said that he hopes the bronze will become the first in a larger collection of statues commemorating all of Aspen's Olympians.  Although such a collection has yet to be approved, a Skier Walk of Fame connecting some of the hotels along the base of Aspen Mountain is something that is being explored at a conceptual level by the city of Aspen.  "I think it's a great idea to have a walkway (commemorating Aspen's skiers) at the base of some of the most famous mountains in the world," he said.  Aspen Mayor Helen Klanderud said she supports such a walk of fame.  "There's a marvelous opportunity for a walkway," she said.  Donations to help pay for the statue can be sent to the Max Marolt Memorial Fund, c/o Mike Marolt, 230 S. Mill Street, Aspen 81611.  Thomas Watkins can be reached at thomas@aspendailynews.com."

Photos of the statue and plaque appear in several sections below.  Credit for the last photo in the first photo section below (which appears to be the photo used as a model for the statue) goes to the Colorado Ski Museum--Ski and Snowboard Hall of Fame. 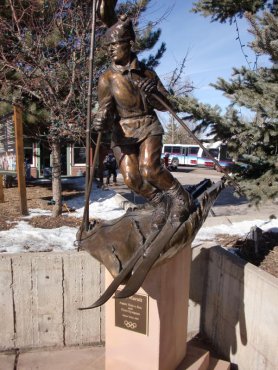 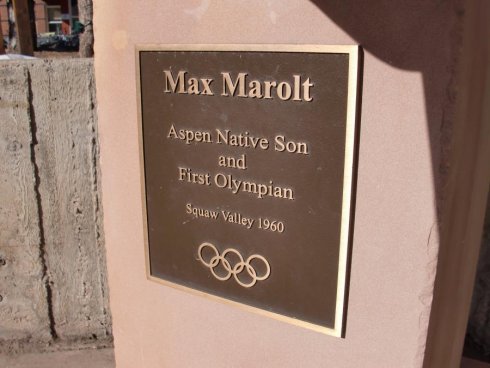 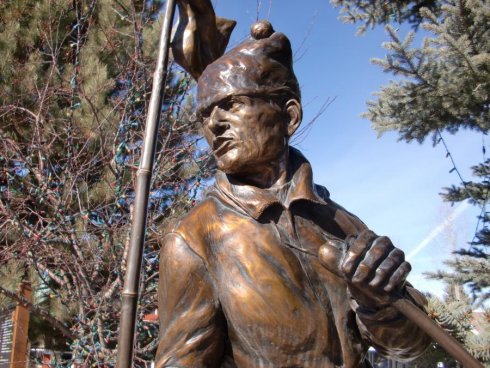 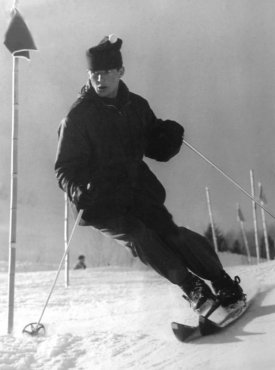 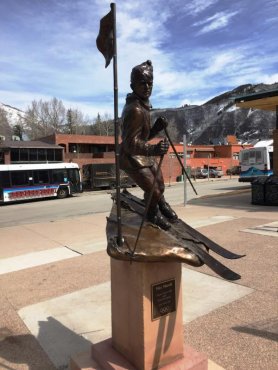 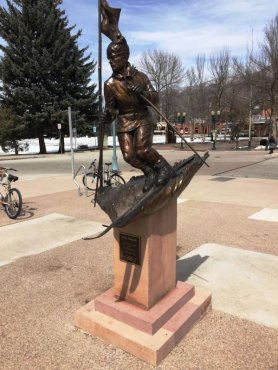 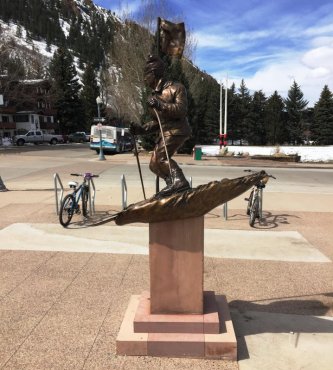 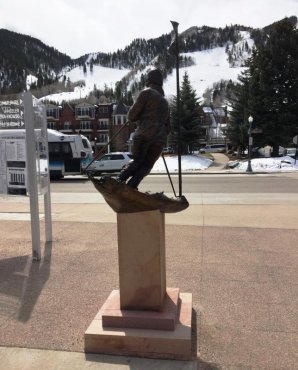 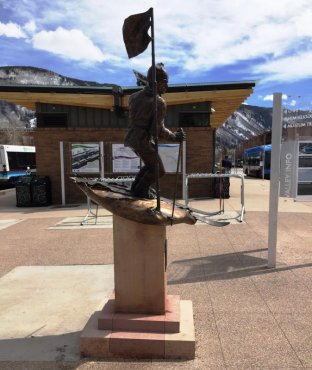 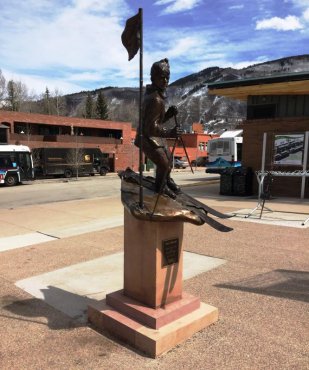 The photos in the section below were taken in May of 2020.  Max appears to be wearing a COVID-19 face mask (which were required to be worn in Aspen around that time).  Click on images to enlarge. 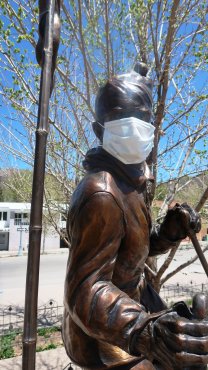 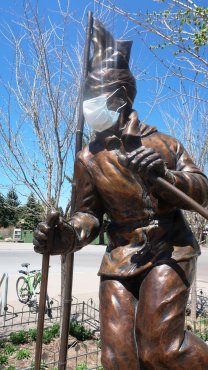 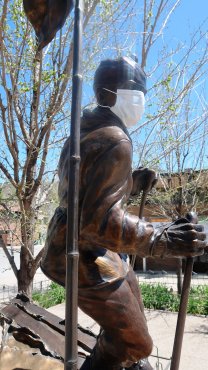