The Kreuzeck sign is on what is called (as of August 2014) Gene Reardon's Run.  At one time this run was called Kreuzeck, and before that it was called Monte Christo.

After a charitable contribution by Gene Reardon, the run was renamed in honor of his father.  Reardon was a lawyer who graduated from the University of Missouri, and for more on him, see this page:  https://www.aspentimes.com/news/gene-francis-reardon/

For more information, see this Aspen Times article: "Ever wonder how some of the area's ski runs got their names? Here is an example involving two runs, one on Aspen Mountain and the other at Snowmass Ski Area. Only one run, on Aspen Mountain was initially up for naming rights in a celebrity-benefit bidding contest to raise money for The Aspen Foundation, which was the fundraising arm of the Skico and precursor to today's Aspen Community Foundation. But the two leading bidders, Harland Adams of Aspen and Gene Reardon of Denver, agreed to make it a tie. Adams [the winner of the bidding war] said that he really wanted to rename a run at Snowmass, where he lives, and Reardon agreed to match Adams' bid of $40,000 ... and $80,000 was raised. Kruezeck run on Aspen Mountain will now be known as Gene Reardon's Run [after the bidder's father] and Village Bound run at Snowmass will now be known as Adams' Avenue."   https://www.aspentimes.com/news/25-50-100-years-ago-136/

The three photos below were taken by the author in August 2014.  Click on them to enlarge. 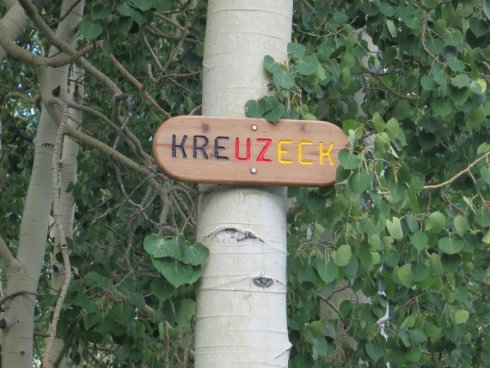 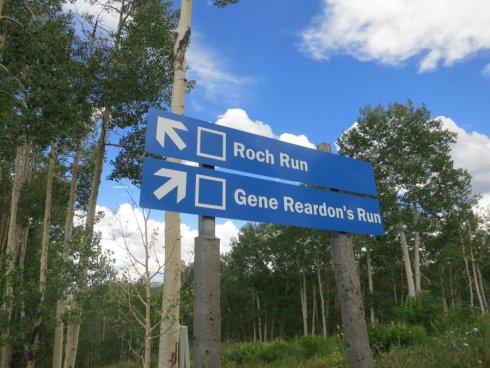