The Ken Hart Plaque is a brass plaque attached to the back of a wooden bench near the Buckhorn run on Aspen Mountain.  The plaque reads as follows:

Many thanks to Ken Hart's daughter, Candice Hart Miller, Hart Project Design LLC, https://www.linkedin.com/in/candice-miller-34720a11, for the information contained in this paragraph about Ken Hart.   Ken Hart (B. Kenin Hart) was born on August 22, 1939, and was the father of four children:   Brian Hart, Kelly Hart, Candice Hart Miller, and Dana Hart-Callanan.   He bought land in Aspen in 1969 and built and remodeled homes that his family lived in until 1999.   He lived his life to the fullest.   His motto was to "work hard and play hard."   He opened his heart to many.   Being an only child he adopted others into his family, including adopted daughter Lisa Lamason, cousins Heidi and Danford Peterson, uncle Louis, and many others.   He was married twice; the first lasted only a year, and the second was to the mother of his children.  He never remarried before passing on. Though his life was too short, he did everything he set out to accomplish and more in his lifetime.   He was self made and achieved great success in his business.   He was kind, loving, and had a big heart.   The saying, "Every knock's a boost" is something he always said in response to any criticism or teasing.   He had many sayings, such as, "Its so nice out, I'll leave it out," and "work hard, play hard," and others.   He also told many jokes and sang all the time.   There was always a movie that could be fit into the weekly routine.    And he was always busy with sports such as skiing, golf, tennis, etc.   Family was most important, and "the more, the merrier" (another saying of his.)   He died in a tragic plane crash on January 18, 2000, along with three other people.   His family misses him every day.   There was a framed poem in his office from a friend’s funeral, Scott Blum.  The poem was very important to him so it was decided by his family to use it in his funeral as well.

“Remember Me”
To the Living I am gone;
To the sorrowful, I will never return;
To the angry, I was cheated.
I cannot speak, but I can listen.
I cannot be seen, but I can be heard.
So as you stand upon a shore,
Gazing at a beautiful sea,
As you look upon a flower
And admire its simplicity,
Remember me.
Remember me in your heart, your thoughts, and your memories.
Of the times we loved, the times we cried,
The times we fought, the times we laughed.
For if you always think if me,
I will never have gone.

This article appeared in the Philadelphis Inquirer on January 24, 2000:   "B. Kenin Hart, 60, president and founder of the Hart Corp. brokerage firm and a resident of Huntingdon Valley, died Tuesday in a plane crash in Kentucky. Mr. Hart and three others were on their way to tour a factory site when the Beechcraft King Air C-90 crashed about noon as the pilot tried to land at an airport in Somerset, Ky. Mr. Hart began his real estate career at age 18 when he began selling manufacturing facilities for a Philadelphia brokerage firm."

Photos of the plaque and the bench are below. 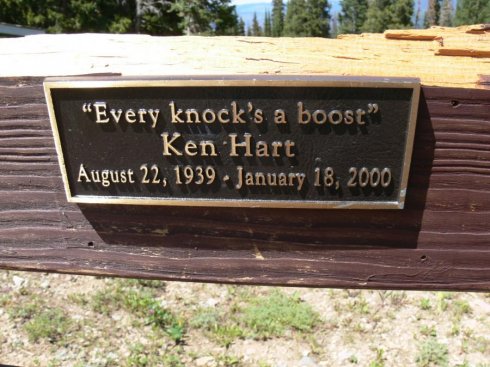 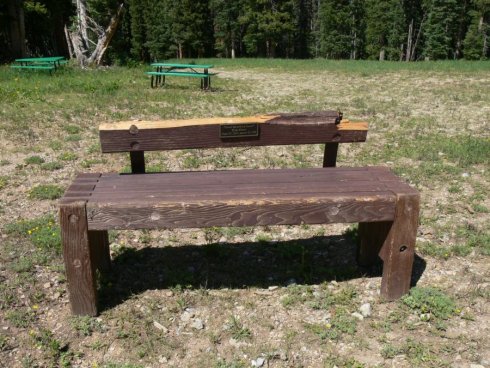