John Suzawith died on November 30, 2007, in Clifton, Colorado.   He was a retired Snowmass Ski Patroller.   The material quoted below in bold appeared in an Aspen Daily News obituary on December 18, 2007.  See:  http://www.aspendailynews.com/section/home/obituary-john-suzawi  The same material used to appear on another web site (http://www2.gjcity.org/e-netVS/Suzawith/JohnsJourney.aspx) but that link no longer works.  That page used to state:  "This web page is dedicated to our friend John Suzawith.  John's ashes are in a bottle that began floating down the Colorado River.  Here we share his final journey."  That web page indicated that the bottle was put into the Colorado River at the Blue Heron boat launch at Grand Junction, Colorado on June 11, 2008.

"The ashes belonged to retired Snowmass ski patroller and noted local musician John Suzawith who died Friday, Nov. 30, in Clifton, CO. of natural causes. He was 61.  John grew up on the family farm in Yelm, Wash., and graduated in 1964 from Yelm High School, where he was the football team captain and student body president.  In the winter of 1967-68 he arrived in Aspen, in a blizzard.  He started on the Snowmass packing crew in 1969 and later moved to the ski patrol.  He ultimately became a patrol supervisor. John spent many winters living in a primitive cabin at the bottom of the Campground lift at Snowmass.  He called it “Pleasant Valley” and smiled when he talked about it.  The Aspen Times once did a feature piece on John, in which it stated that he represented “a new breed of patrolman.”  The name stuck, and “Breed” became his patrol nickname, along with “J. Suza.” He left the patrol in 1995 and spent the next decade working as a house painter in Whitefish, Mont.  He later moved to Clifton.  He worked for the city of Grand Junction at the Persigo Wastewater Treatment Plant and was part-time owner of Johnny’s Bar and Grill.  His lifelong passion was music:  John was a talented jazz and rhythm-and-blues guitarist who played in bands beginning in high school.  He played with groups in California, Washington, Montana and Oregon.  In the Roaring Fork Valley, locals remember his stint with Carbondale’s Sirens of Swing.  John enjoyed people, sports and family. Friends and family remember his easy smile and dry wit.  He will be missed. He leaves behind a grown daughter, Aria, of Newport Beach, Calif.; and his longtime companion, Beverly Smalley, of Clifton.  Other survivors include brothers Thom, of Basalt; Gerald, of Rainier, Wash.; Bill, of Yelm, Wash.; and sisters Theresa, of Yelm; and Suzann of Fairbanks, Alaska; and niece Mantia Maria, of Olympia, Wash."

The memorial consists of one photo of John Suzawith attached to a tree located near the top of the gondola at Snowmass.  There are also some prayer flags strung in the trees.  Photos are below.  Photo credit for the last photo goes to:  http://www2.gjcity.org/e-netVS/Suzawith/Default.aspx.  This page also provides a place for the finder of the bottle to enter the date found, location found, and any comments.  As far as the author can determine, the bottle has not yet been found (as of May, 2013). 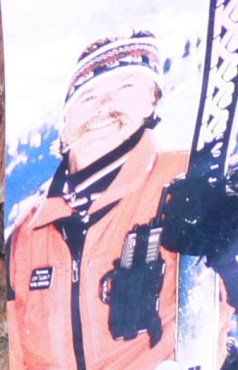 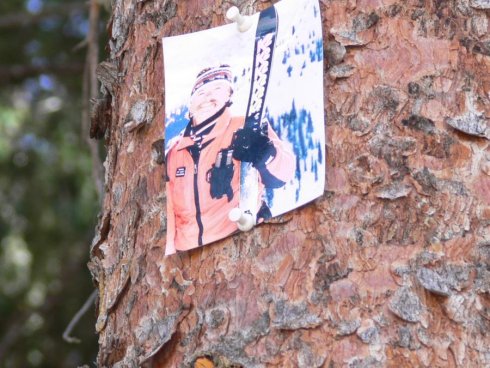 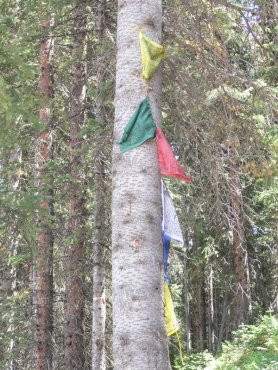 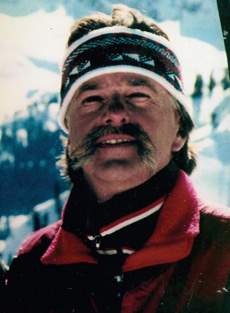