John Nicoletta was a 27-year old Aspen based extreme skier who was killed at the Alyeska resort in Alaska on April 11, 2008, while competing in the U.S. World Freeskiing Championships.  See this article from the Aspen Daily News:  http://www.aspendailynews.com/section/home/122244.  At one time there was a  "R.I.P John Nicoletta" page on Facebook here:   https://www.facebook.com/groups/10451514247/    See this Snowmass Sun newspaper article of March 7, 2012 by David Wood, "Three Aspen Mountain shrines dedicated to locals" which is set out in full below at the bottom of this page.

An article dated April 13, 2008 on WBZ News Radio 1030 Boston ("Extreme skier from Westford killed in Alaskan competition") stated the following:  "Anchorage, AK (AP)  -- An extreme skier, originally from Westford, falls to his death in Alaska.  John Nicoletta, 27,was a graduate of Lawrence Academy in Groton, in Alaska for the Subaru Freeskiing World Championship.  Witnesses say he cart-wheeled head over heels for hundreds of feet down a mountain-side on the first day of the competition.  Police say Nicoletta was dead on-scene due to blunt trauma to the chest."

This Powder Magazine article by Matt Hansen mentions the John Nicoletta Shrine on Aspen Mountain, and also contains a photo of the Shrine by Tom Zuccareno.  http://www.powder.com/never-never-land/  See below for the photo.

There is a John Nicoletta Wikipedia page (https://en.wikipedia.org/wiki/John_Nicoletta) which, as of October 28, 2020, contained this sentence:  "John has a shrine dedicated to him at Aspen Mountain (ski area)."

The John Nicoletta Shrine contains many interesting items:  Many photos of John, newspaper articles about his death, several pairs of skis, Tibetan prayer flags, a very nice swing with his name carved in the swing seat (and the swing is hung from the trees with long ropes), a frying pan, a shovel, an eagle statue, wind chimes made of cut up ski poles, and a paperback copy of Jack Kerouac's book, On The Road.

The shrine is on Aspen Mountain, and photos of it are below.

This shrine is covered in the book, "Sanctuaries in the Snow--The Shrines and Memorials of Aspen/Snowmass."  The book may be purchased on this page on this site:  http://www.aspensnowmassshrines.com/index.php?The-Book. 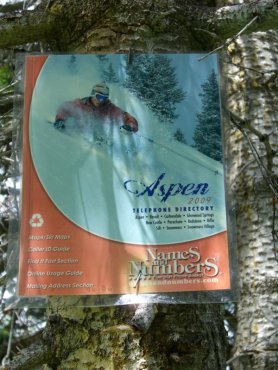 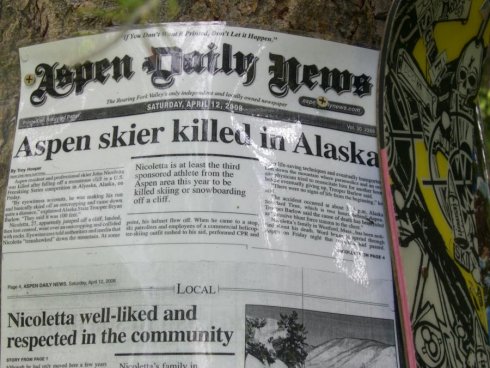 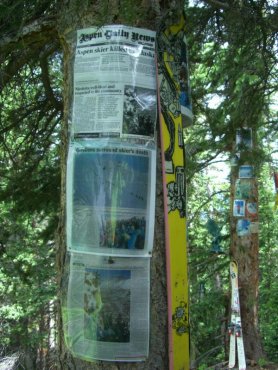 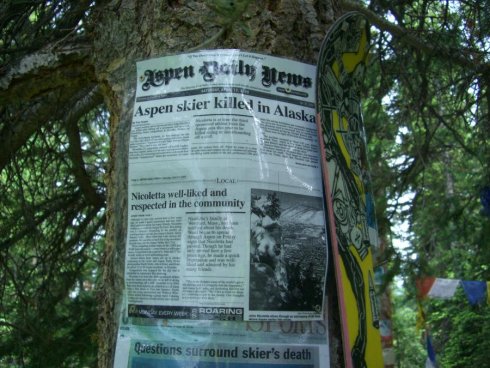 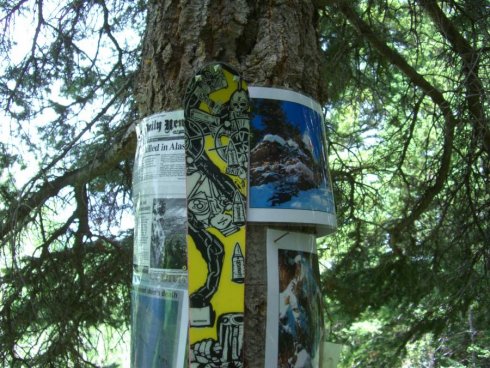 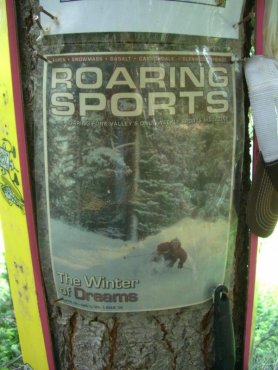 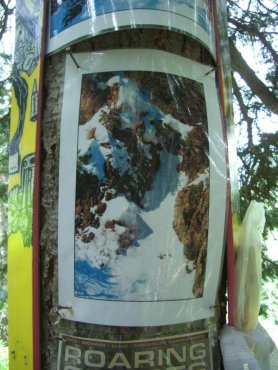 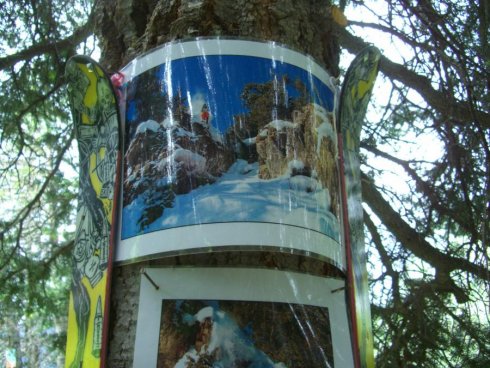 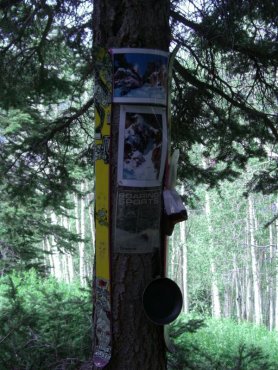 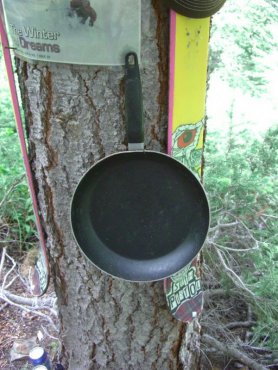 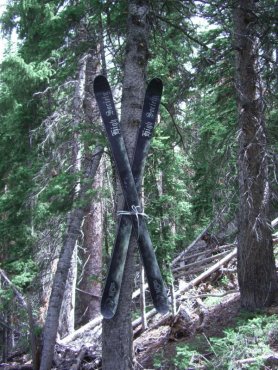 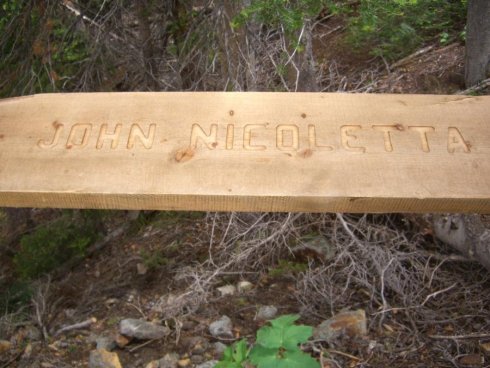 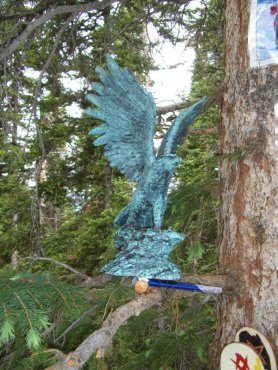 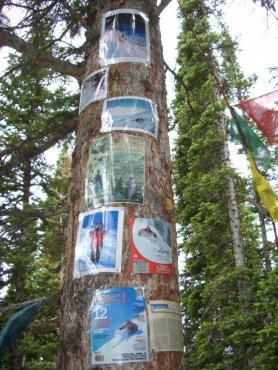 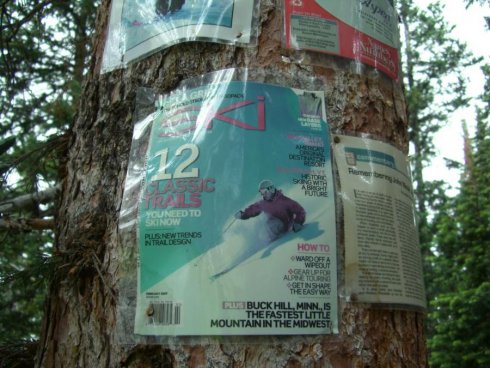 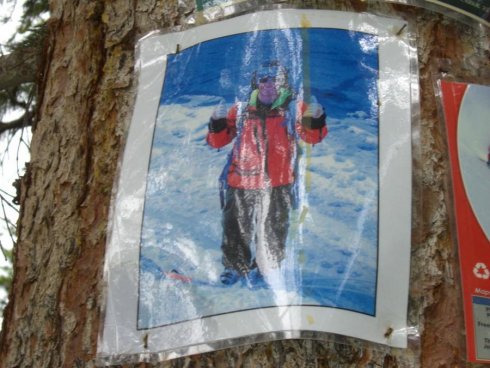 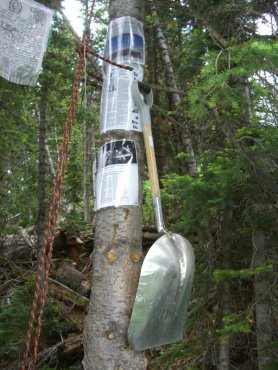 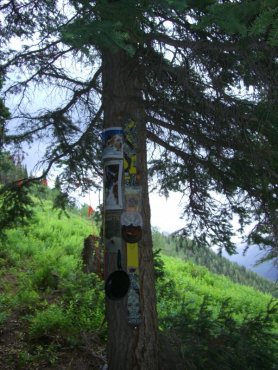 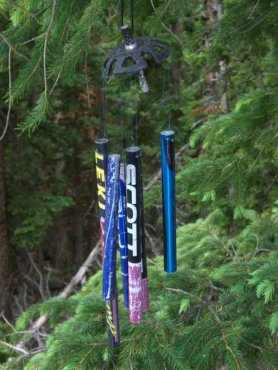 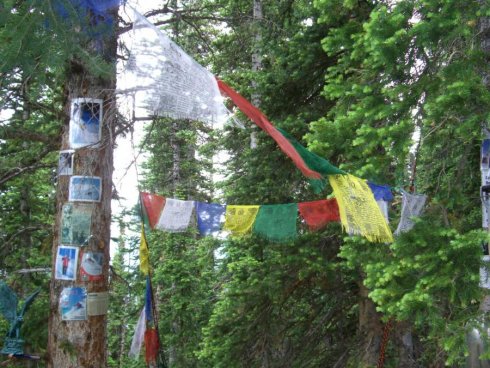 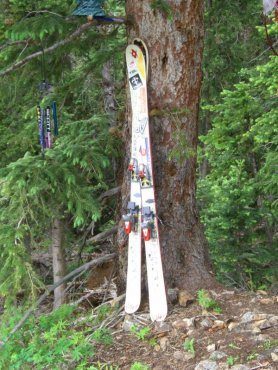 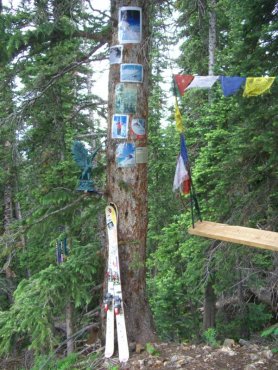 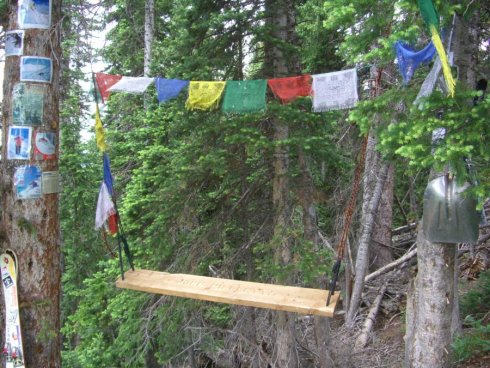 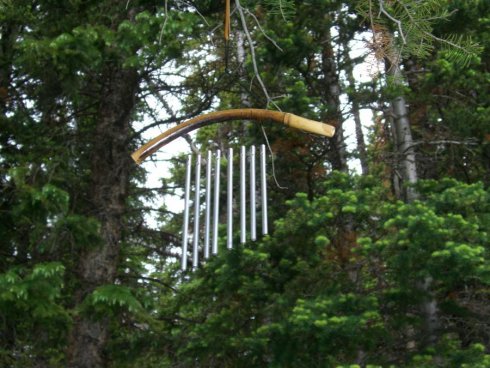 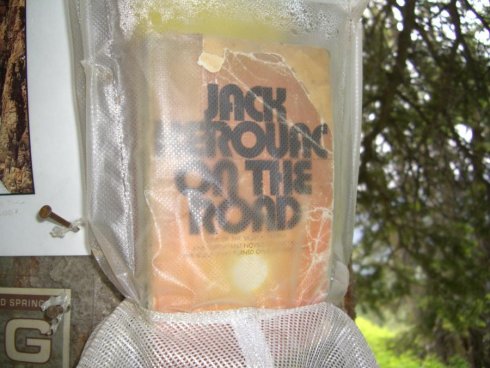 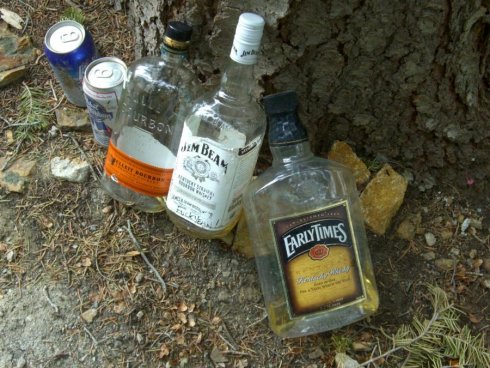 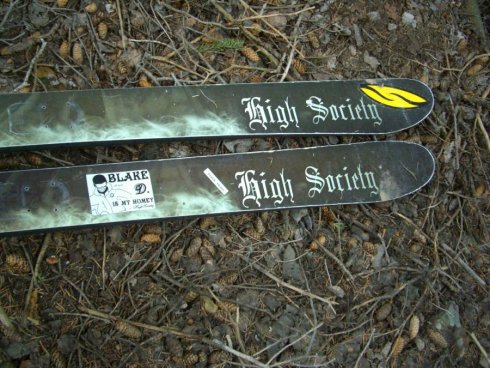 This photo of the John Nicoletta shrine on Aspen Mountain by Tom Zuccareno is from this Powder magazine article by Matt Hansen:  https://www.powder.com/never-never-land/  The copy in quotes below is also from the article.

"There are more than 50 shrines at the four ski areas around Aspen. There’s one for Jimi Hendrix, Jerry Garcia, Hunter S. Thompson, John Denver, Marilyn Monroe, and nearly all of the former ski gangs. The Nicoletta Shrine is among the newer ones, established by a current generation of skiers who have put their own unique stamp on the mountain.Getting to the shrine requires ducking a rope and skiing the top of a mellow powder field that rolls into an enormous drainage. Just as it steepens, the friends cut sharply into a small grove hidden in the trees. The shrine is decorated with some press clippings about their late friend, a few pairs of his old skis, and a wooden bench suspended by ropes between two old trees. Illuminated in the distance is a perfect view of Highland Bowl, a steep pyramid that pitches forward like an ocean wave frozen in time. With such a dramatic scene, it’s the kind of place that touches a person’s soul. There’s no disturbance, no stress, just friends who share the bond of living in a crazy town, losing loved ones to both the mountains and the machine, and doing whatever it takes to keep skiing. But above all else, the shrine is a place where you don’t think too hard about tomorrow. It’s about today and appreciating what you have and whom you’re with at that very moment." 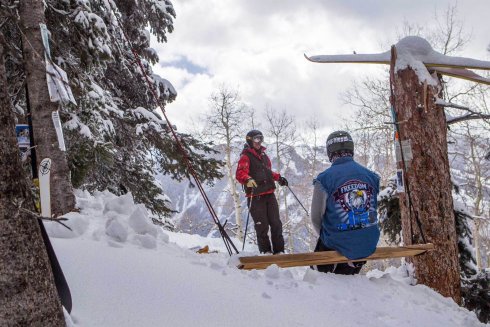 Below is an article by David Wood about the John Nicoletta Shrine that appeared in the Snowmass Sun newspaper.

Not all the shrines on Aspen Mountain are dedicated to famous people, such as the shrines to Jerry Garcia, Elvis Presley, Marilyn Monroe, Michael Houser, Jimi Hendrix, and John Denver. There are also some shrines dedicated to locals such as Adam Dennis, John Nicoletta and Raoul Wille.
Adam Dennis

Adam Dennis died on April 4, 2011. at the age of 38, when he was caught in an avalanche in the Desolation Row area, between Maroon and Tonar bowls in the Aspen Highlands backcountry.

Dennis had been an Aspen-area resident for 14 years, working as a professional photographer and guest services manager at some of the area's most prominent hotels, including the Viceroy in Snowmass Village. He was said to have the ability to bring people together in friendship, and nowhere was that more evident than in his unique and inspiring passion for music and his deep love of sharing it with others.

His shrine was established on April 11, 2011. Several items in his shrine relate to the very popular band he loved so very much, Widespread Panic.

John Nicoletta was a 27-year-old Aspen-based extreme skier who was killed at the Alyeska resort in Alaska on April 11, 2008, while competing in the U.S. World Freeskiing Championships. His shrine contains many items, including photos of him, newspaper articles about his death, several pairs of skis, Tibetan prayer flags, a wooden swing with his name carved into the seat, a frying pan, a shovel, an eagle statue, wind chimes made out of cut-up ski poles, and a paperback copy of Jack Kerouac's book, “On the Road.”

Raoul Wille died of altitude sickness on Oct. 11, 1998, while climbing Mt. Burunse near Mt. Everest in Nepal. He was the son of Lou and Lynne Wille, owners of the Tyrolean Lodge at 200 W. Main St. in Aspen. He was one of four children and an avid ski racer. He operated the lodge from mid-1980 until his untimely death.

A pair of his skis is mounted on the outside of the lodge building. His shrine is a three-sided and roofed structure made of lodge-pole pines, and filled with many of his possessions, including his purple and yellow alpine skating boots, skis, family photos, crystals, beer bottles, a flag for the musical group “The Who,” and many other items. Around the structure are animal skulls and bones, hung from the trees with wire.

David Wood (AspenShrines@aol.com) is the author of the best-selling book about the Aspen shrines, “Sanctuaries in the Snow — The Shrines and Memorials of Aspen/Snowmass.” He donates all of his profits from book sales to a local charity, The Trashmasters Scholarship Fund. The book can be purchased in Snowmass Village at Snowmass Sports, the Stew Pot, Sundance Liquor and Gifts, the Village Market, and 81615, as well as at various locations in Aspen. To view previous articles visit: www.snowmasssun.com/shrines. 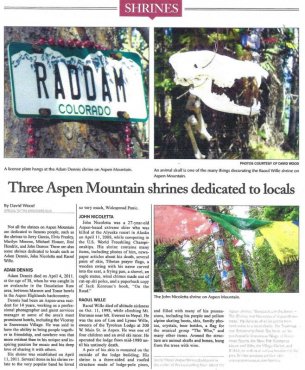