The John MacKenzie Wilkins Memorial is on Aspen Mountain.
Here is his obituary:  http://mbclarkfuneralhome.com/tribute/details/367/John-Wilkins/obituary.html  (Click the link to see his photo.)
"In Memory of John MacKenzie Wilkins, 1993 - 2016, Obituary of John Wilkins.
John MacKenzie Wilkins, a snowboarder from Lake Placid, NY, passed away suddenly on November 30, 2016.  John, known as "Joe" to family and friends, was born on March 31, 1993. He graduated from the National Sports Academy in 2011, and from Sierra Nevada College in Incline Village NV in 2015, where he flourished academically and socially. He majored in Entrepreneurship.  Whether in the Adirondacks or the High Sierra, John was happiest when cascading down the steeps at Squaw Valley or the Slides, or shredding the terrain park at Northstar or Whiteface. He was known for his quick wit, his devilish smile, his kind heart and his generosity. Whatever he had, he wanted to share with his friends. He was a great cook and a master on the grill.  While at SNC, John organized the college water ski club and water ski team, and was the team's first captain. The team almost qualified for Collegiate National Championships in their first year of competition. John excelled in water ski jumping.  As a student snowboarder at NSA and as a member of the NYSEF free ride program, John competed in slopestyle, and to a lesser degree half pipe, boarder cross and giant slalom. He was the age group USASA series champion in the New York Series several times and competed in multiple USASA National Championships. He competed on the Chevrolet Rev Tour, a series of events held around the country for elite up and coming snowboarders. He was a frequent competitor in the Wet 'n Wild series at the MacKenzie Ski Jump Complex in the summer, often being the only snowboarder in a field of skiers.  John and two friends conceived a line of snowboarding sweaters and accessories known as Hardway Apparel. It was this experience that gave John the passion for being an entrepreneur. Hardway is still seen in terrain parks and half pipes around the East.  John will be remembered as a fantastic son, a good kid and a daredevil. He was always polite and was very funny. He was frequently injured. He had two seasons: snowboarding and recovery from snowboarding. He had lots of friends. Even as a small child, he could hold long conversations with adults and carry the conversation at dinner.  John is survived by his parents, John and Aimee Wilkins of Lake Placid and Celebration, FL, his sister Grace and her fiancé Ricky Walters of Augusta GA, and his maternal grandparents Bob and Donnalyn Twyman of Farmingdale, NJ. He is also survived by his aunts and uncles Joan and Mike Grady and Mark Wilkins, all of Lake Placid, and Doug and Michelle Twyman of Sea Girt, NJ, and cousins Colin and Ryan Grady, Molly Wilkins, and Erin, Dillon and Colin Twyman. He was predeceased by his paternal grandparents Jack and Rita Wilkins and his step grand dad Ralph Bozarth, all of Lake Placid.  Calling Hours will be held Sunday, December 4th from 4:00PM to 7:00PM at the M. B. Clark, Inc. Funeral Home in Lake Placid, NY. A Mass of Christian Burial will be celebrated Monday, December 5th at 11:00AM at St. Agnes Catholic Church in Lake Placid, NY. Rev. John Yonkovig will officiate. Cremation will follow. Burial will be in St. Agnes Cemetery at the convenience of the family. There will be a reception following the funeral at the Love residence, 151 Victor Herbert Road in Lake Placid.  In lieu of flowers, donations can be made to New York Ski Educational Foundation (NYSEF) - Freeride Program, PO Box 300, Wilmington, NY 12997 or directly via the website www.nysef.org. Please be sure to note John M. Wilkins in regards to any donation made.  Relatives and friends are invited to share a memory or prayer, upload a photo, order flowers or leave online condolences at www.mbclarkfuneralhome.com"
Two photos are below (taken in February 2017); click on images to enlarge. 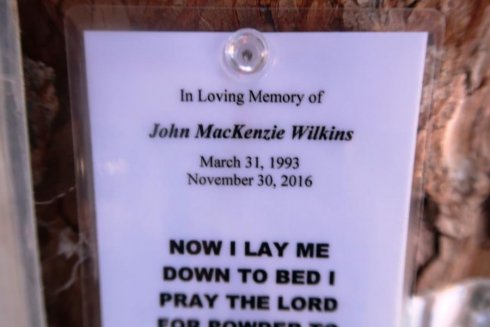 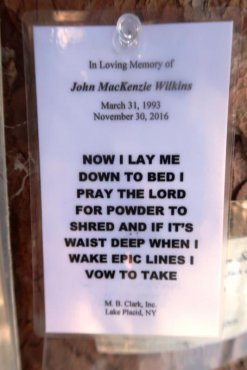