The Joan Campion Reilly Holm ("Joan My Mom") Shrine is on Aspen Mountain.  The author found it on March 6, 2012. It is located near the Buckhorn Cabin, and is dedicated to Joan Campion Reilly Holm. It was installed by Joan's daughter, Megan, who told the author in March 2012, "I put the shrine on Aspen Mountain in winter 2009…she died on October 31, 2009. It helps me to stay connected to the spiritual and physical world as it helps me to remember that she is often in my thoughts and always in my heart. We love her and miss her very much. Not many people have been there yet, but it is a special place for me to go and be at peace. It helps me remember her and know that she is often in my thoughts but always in my heart." The memorial consists of a green metal plaque with white lettering ("Joan, My Mom Love Megan") some flowers, and an "Irish Blessing."
This is Joan's obituary:

Joan Campion Reilly Holm, 75, of Campbell Hall, NY died Saturday, October 31, 2009 at Columbia Presbyterian Hospital of New York, NY. Joan was born August 22, 1934 in Goshen, NY, the daughter of Francis and Dorothy (Ryan) Campion. She was predeceased by her husbands, Paul L. Holm and Edward J. Reilly, and the sister to the late Colleen Mills. Joan Graduated from St. John's High School and St. Vincent's School of Nursing in New York City. Mrs. Holm's career included practice in Goshen, Washington, DC and West Virginia. Most of her career was spent in nursing administration, most notably as Director of Nursing at Doctor's Hospital in Washington, DC. She is survived by her daughters, Megan Reilly of Aspen, CO and Moira Hollenbeck of Cumberland, RI, her sons, Patrick Reilly of N. Myrtle Beach, SC and Edmund Reilly of Gaithersburg, MD; and their families. She is also survived by two step sons, Jeff Holm of Pennsylvania and David Holm of Maryland, Nephews, David Mills and Mike Mills, 3 grandchildren, 6 step grandchildren; 9 great grandchildren. A Memorial Mass will be held at St. John the Evangelist R.C. Church, 52 Murray Avenue, Goshen, NY on Monday, November 9, 2009 at 10:30 am. In lieu of flowers, donations may be made in her name to St. Jude's Children's Hospital, 501 St. Jude's Place, Memphis, TN 38105. Arrangements under the care of the Donovan Funeral Home, Inc., Goshen, NY. To leave the family a personal condolence please visit donovanfunerals.com.
Also see this page:  https://www.legacy.com/obituaries/recordonline/obituary.aspx?n=joan-campion-reilly-holm&pid=135514789
See the photo of this Shrine below, and for more photos of this shrine see this Facebook photo album (you do not need a Facebook account to view this album): https://www.facebook.com/media/set/?set=a.286152468123391.67063.100001859201674&type=1&l=12ddf5634c. 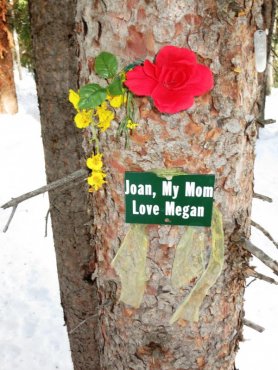