There is a wooden sign attached to a tree near Ruthies Run on Aspen Mountain which has this carved into it:

"LOTT, Jeffrey Ryan, 37, of Stafford, Virginia, died Tuesday, March 3, 2009 in a car accident. Jeff had many accomplishments and adventures in his life, including his proud service to his country in the Navy and the military reserves, his graduation from Colorado State University, recreating in Rocky Mountain west, fishing the shores of Alaska, and helping conserve our wilderness with his work for the U.S. Forest Service. Mourning his passing are his loving wife, Courtney; his beautiful children, Ryan Lewis and Carolina Rose, of Stafford Va.; his mother, Rosalyn Lott; and his sister, Cheryl Thomas, of Nitro, W.Va.; his father and stepmother, David and Allene Lott of Chester, Va. Jeff was an amazing husband, father, son, brother and friend. His love of nature and his undeniable spirit will live forever in his children and through our memories. A memorial service will be held at Brandermill Church, 4500 Millridge Parkway, Midlothian, Virginia 23112, Sunday, March 8, 2009 at 2 p.m. In lieu of flowers, contributions to Jeff's children can be made via Bank of America, Lott Children Assistance Fund, 1525 Stafford Market Place, Stafford, Va. 22556, or at any Bank of America location by referencing Lott Children Assistance Fund."
https://www.legacy.com/obituaries/legacy/obituary.aspx?n=jeffrey-ryan-lott&pid=124930347

In November 2011 the author received a communication from Eli Madden, of Bozeman, Montana, with this additional information about this sign:  Eli and Jeff were best friends growing up in Virginia, and Eli and Jeff lived together in Aspen, on Race Street, from 1995 to 1998.  Soon after he died, his ashes were spread in the creek by the art park in Aspen.  The idea for the sign came from Eli and Jeff's wife, Courtney, and it was erected six months after he died.  His children, Ryan Lewis and Carolina Rose, were in attendance when the sign was erected.  Eli said, "To me [the sign] is the equivalent of his tombstone. He loved Aspen and the Rocky Mountains and he will always be there to me."

With regard to the "Whoop" which is on the sign, Eli had this to say: "The Whoop is something we learned in Aspen. The 10th mountain army division who trained in Aspen would "whoop" each other when they were separated in the woods, you can tell how far away you were by listening which direction and loudness the "whoop" was coming from and regroup. Some oldtimer told us about it. We used it if we got separated skiing trees, or at a concert etc. we could always find each other. A lot of people in Aspen do it. Next time your standing in the gondola line yell whoop and I bet people will whoop you back. It ended up as being a way to say hello or goodbye, probably the last thing I said to Jeff before he died." 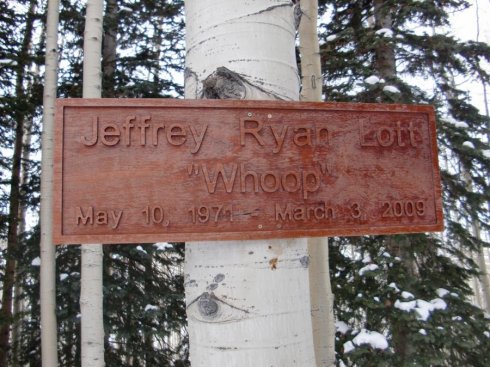 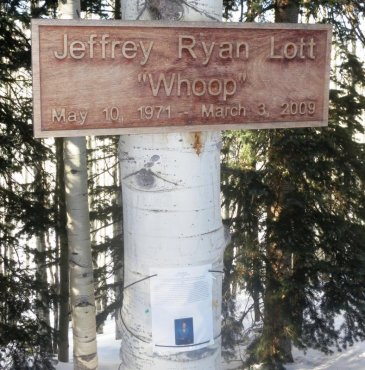 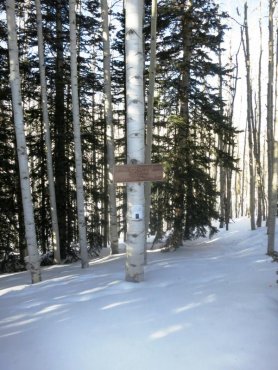 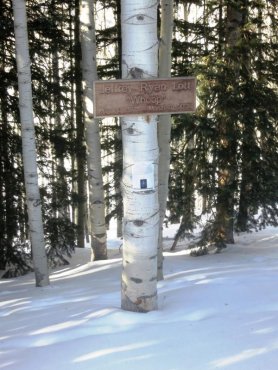 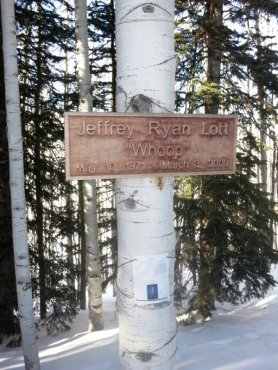 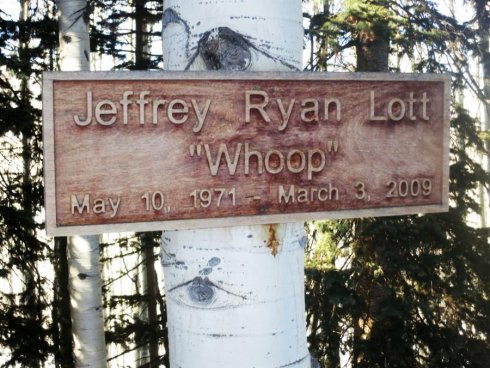 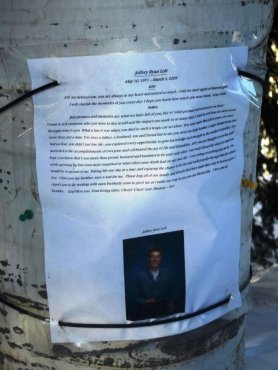 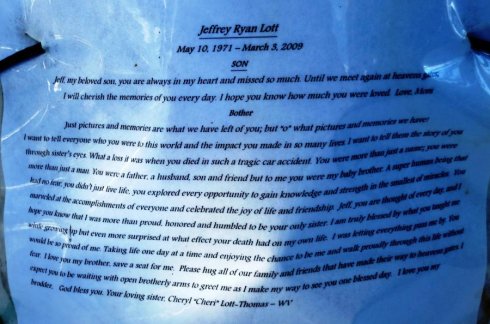 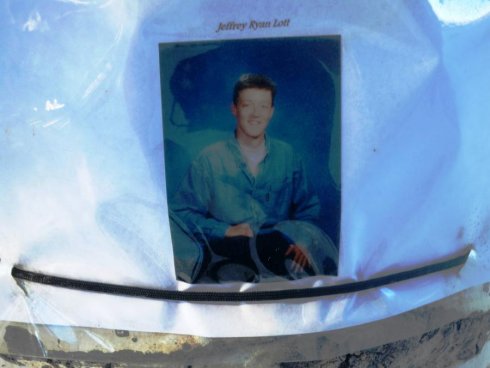