See this page for Jeff's obituary: https://www.legacy.com/obituaries/sheboyganpress/obituary.aspx?n=jeffrey-e-lammers&pid=181632027&fhid=14154, and it is set out in full below the photos.  If you have information about Jeff that would be appropriate to add to this page, please send to AspenShrines@aol.com.

One of the items in the Shrine contains the quote, "Ski fast, take chances!"  That was one of Jeff's favorite sayings.

The following was sent to the author in February 2019 by a person who had worked with Jeff:

"I worked with Jeff for about 11 years and almost every year we had the opportunity to come to Aspen and ski.  It was something we both loved to do and Aspen is a special place where we built great memories.  Jeff was one of those people who really stood out and was well respected by everyone who met him.  When Jeff was battling cancer we asked the people who worked for him to contribute to a list of words that described him and they listed respected, frank, level-headed, direct, honest, ethical, principled, candid, strategic, accomplished, sensible, fair, practical, pragmatic, influential, professional, effective, distinguished, and honorable.  You may see some Hello Kitty stickers in the shrine.  On one of our early trips to Aspen Jeff brought some of his daughter’s Hello Kitty and Care Bear stickers and started a tradition.  Anytime somebody did something dumb (i.e. falling down in the lift line or getting on the chairlift, knocking someone else over, getting stuck in a tree well, etc.) they would earn a sticker.  At the end of the day the Sticker Committee (a committee of one) would decide if someone deserved a sticker.  If you questioned the Sticker Committee’s decision it was worth a sticker.  At night the Sticker Committee would sneak down and apply the stickers to the deserving parties equipment, sometimes in obvious spots, but other times they were hidden on the helmet under goggles so the unsuspecting recipient would hit the slopes not knowing they had been awarded a sticker.  Jeff last skied with us in Aspen in February of 2016.  Two months later he was diagnosed with prostate cancer and then in July with colon cancer.  As already noted, Jeff passed away in September of 2016.  When we were there in February of 2016 we were skiing an area of Snowmass nicknamed Cheesehead Glades [named in honor of the trail crew member from Wisconsin who cut the glades].  We talked about building a Packer shrine the following year, but never dreamed at that time that we would be building the shrine in his honor a year later." 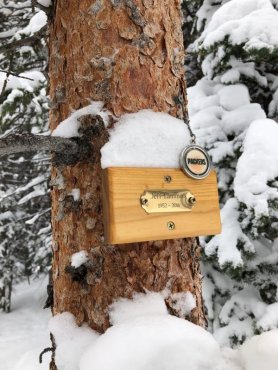 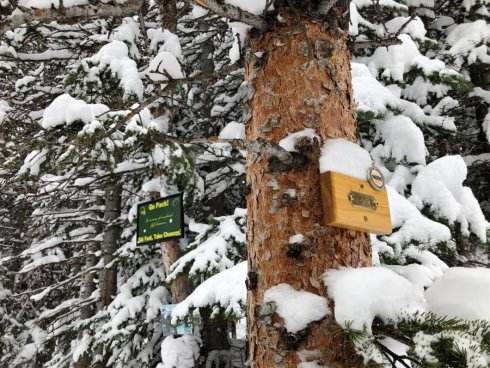 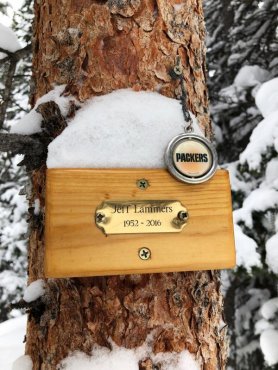 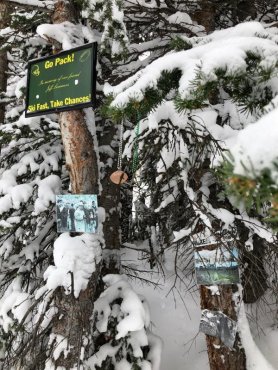 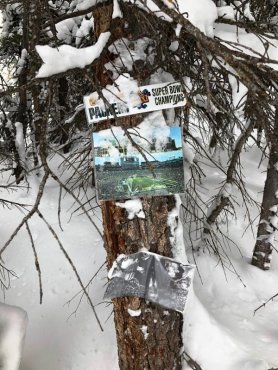 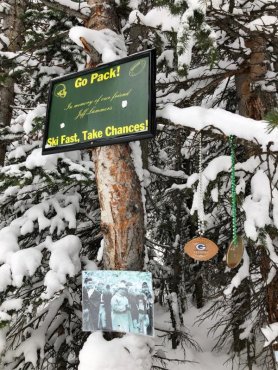 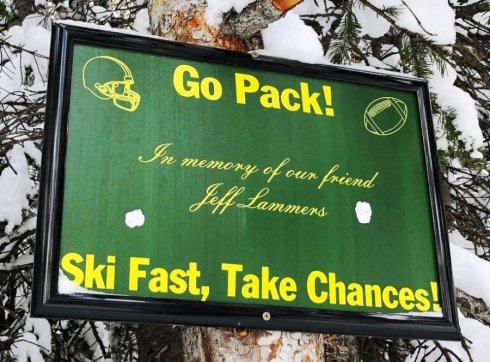 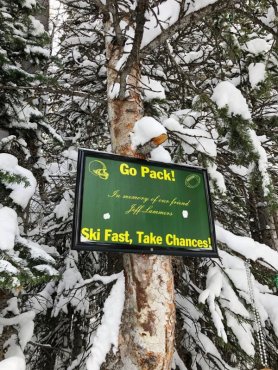 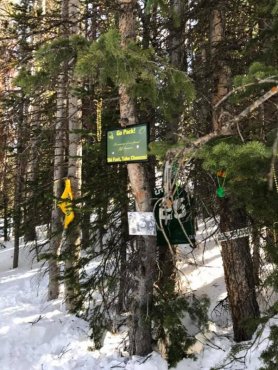 The four photos in this photo section were taken by the author on January 7, 2020.  Click on imiages to enlarge. 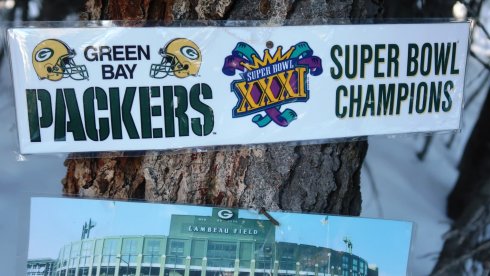 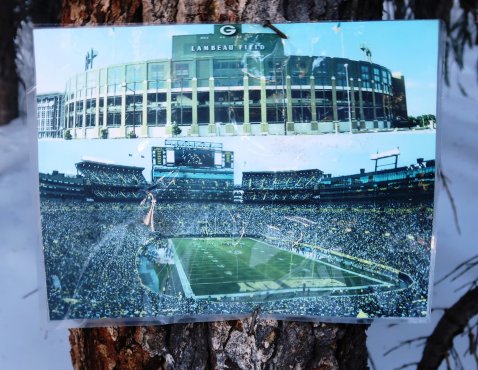 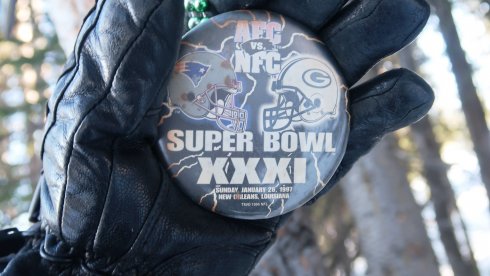 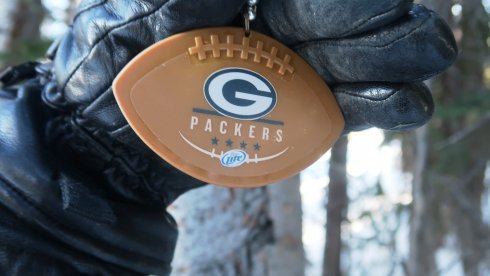 Jeffrey E. Lammers, 63, passed away Sunday, September 25, 2016 after a short and hard fight with cancer at Cherry Meadows Hospice in Appleton, Wisconsin. He was born in Milwaukee, Wisconsin on October 12, 1952, to William and Joanne (Laack) Lammers. Jeff graduated from Plymouth High School in 1970 and Lakeland University in 1974. While attending School, he became Credit Manager for Sargento Cheese Company where he found his passion - Business. From there he transferred to Duralam, Inc. in Appleton where he oversaw the Accounting Department. After an acquisition in 2001 by Bemis Company, Inc., he found great fulfillment developing strategic plans and successfully leading his Global Procurement Team.

Although his life ended sooner than expected, Jeff had a gift of living each day to its fullest. He was a level-headed, kind, and practical man who had a large impact on many people's lives, both in business and in his personal life. In his free time he was happy boating with his family on Lake Michigan during the summer months and downhill skiing with friends in the winter.

Jeff will be greatly missed by his wife: Susan; his children: Julia, Michael, and Anna; his parents: Bill and Joanne Lammers; a brother: Bruce (Isabel) Lammers; his mother-in-law: Nancy (Luke) LeBoeuf; and brothers-in-law: David Zanon and Christopher (Karen) Zanon. He was preceded in death by his father-in-law: Anthony Zanon.

A memorial service for Jeff will be held at 11:00 AM on Friday, September 30, 2016 at FIRST CONGREGATIONAL UNITED CHURCH OF CHRIST, 724 E. South River Street, Appleton, with Rev. Dr. Steve Savides officiating. There will be a time of visitation at the Wichmann Funeral Home Tri County Chapel, 1592 Oneida Street in Menasha on Thursday from 4:00 PM until 7:00 PM and again at the church on Friday morning from 9:00 AM until the time of service.

In lieu of flowers, a memorial fund is being established in Jeff's name at Homeless Connections.

For more information or to share a memory of Jeff, please visit www.wichmannfargo.com.
Published in Sheboygan Press from Sept. 28 to Sept. 30, 2016