Henry Filip was a local who died in a kayak accident in the “Meatgrinder” section of the  on June 28, 1997.  A full report on the accident is at the end of this page, following the photos.

Also there is a pair of yellow and black San Marco ski boots mounted there, and one of the ski boots has a small bell attached to it.  In his book "Aspen Ski and Snowboard Guide" Neal Beidleman says (on page 45) that these boots belonged to Henry Filip.  (These boots disappeared sometime in 2016; but the plaque is still there.)

(There is also a run at Aspen Highlands named after Henry Filip.  It is in the Y zone at the bowl and is named "Filip's Leap.")

The Aspen Valley Ski and Snowboard Club grants the "Henry Filip Award" in recognition of excellence and dedication in volunteer coaching.  The award honors the memory of Filip who was a volunteer coach during the late 1980's and early '90s.  According to an April 21, 2010 news release from the club, "Henry was a beloved coach and a vibrant person filled with a zest for life who passed away in a kayaking accident in 1997."  The 2010 award winner was Mirte Mallory, an AVSC alum and volunteer coach with AVSC's Nordic Program.  See:  http://www.teamavsc.org/News/NewsStory.cfm?K=418 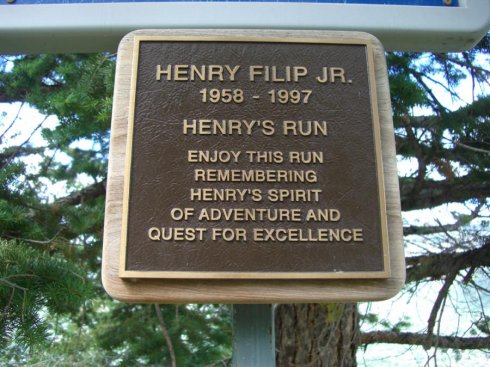 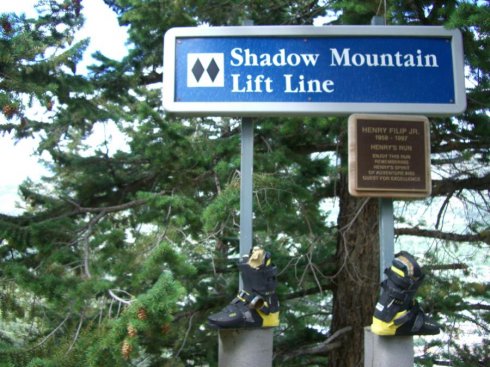 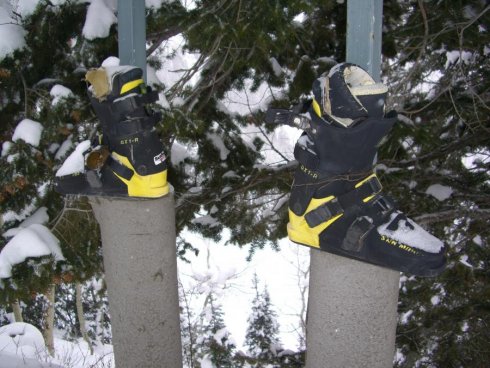 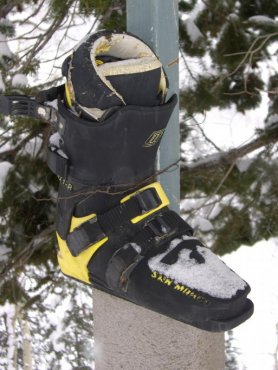 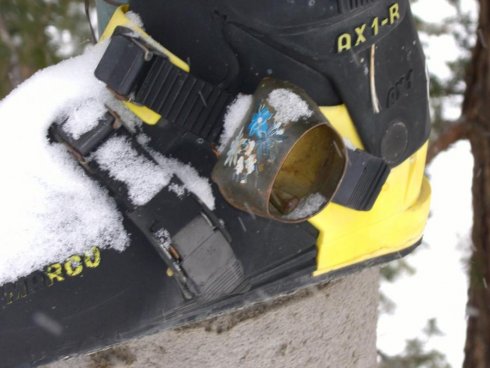 The report of Henry's death:

June 28, 1997
Meatgrinder section of the Crystal

Colorado's Crystal River was running approximately 1,250 cfs (considered a medium-high level) on June 28, 1997. Local boater Henry Filip scouted Meatgrinder Rapid before putting-in, even though he probably had run this drop about 50 times during his lifetime. Meatgrinder is divided by a large boulder, known as the "Island," which splits the river into a right and left channel and marks the middle of the rapid.

The upper half is the more technically demanding section, with pourovers, wood and the need to move right or left to avoid the rock island obstacle. Two kayakers and one other spectator were stationed along the river-left bank with a throw rope and a video camera. Henry ran the upper half of Meatgrinder without incident and eddied-out in the river-left channel.

The lower half is not as technical, but includes three holes in succession before the rapid ends. Henry waited while long-time paddling partner Gordon Banks set-up to film the lower half of the drop. Henry peeled-out and then went over a pourover and another hole he didn't have momentum to penetrate. After getting windowshaded in the hole, he recovered, but was then knocked over by the next cluster of holes.

He floated out of this second group of holes immediately but his roll attempts were disrupted by another pourover and rough water. Henry floated into the third group of holes, marked by a cliff on the river-left bank, still attempting to roll. He most likely took some head blows from underwater rocks in the process. Upon exiting the holes, Henry didn't show any more movement, nor did he attempt to roll. Slow-motion video replays vaguely show him letting go of his paddle after he drifts out of the holes next to the small cliff.

On shore, only Gordon was positioned to see the lower part of Henry's run. His perspective was limited, however, because he was looking through the viewfinder. As a result, he could not tell where Henry was. He presumed Henry had finally swum from his boat. The three spectators, now rescuers, searched the bottom area of Meatgrinder unsuccessfully before regrouping. Two of them then searched the river-right side of the river while Gordon searched farther downstream.

Gordon went down to Penny Hotsprings (one mile downstream), where he saw Henry's kayak floating upside-down in the middle of the river. He went down to the river to retrieve the boat. As he got closer, he realized Henry was still in the boat. Gordon and another rescuer could not get Henry out of the river before he slid into Narrows Rapid, just downstream of the hotspring.

Henry floated through the Narrows section in his boat as well. Two miles later and after multiple attempts to get his boat to shore, Henry dislodged from the boat. Gordon reached him at an island and attempted resuscitation. By that time, Henry had been under his boat floating down the river for approximately 45 minutes.

Initial Report:
On June 28 Henry Filip, 38, was killed while running class V+ Meatgrinder Rapid on Colorado's Crystal River near Redstone, Colorado. Filip was apparently boating alone, although his descent was being videoed by others. The river was running 1200 cfs, an extremely high level. Both internet postings were extremely sketchy, and more information is needed.

Detailed Description:
Meatgrinder Rapid on Colorado ’s Crystal River is a short, very intense stretch of Class V whitewater. The upper half is quite technical, with a need to move to the right to avoid a rocky island. Below here the river is less demanding, but there are three big holes in rapid succession and a number of smaller ones which must be dealt with. The river was running 1200 cfs, a  high level. Henry Filip, 38, was an experienced, well regarded local paddler and skier. He was kayaking alone, but because his descent was being videoed he had two other boaters positioned with throw bags.

Filip ran the top half of Meatgrinder Rapid without incident. When he peeled out into the lower section there was only one person downstream: the videographer. Filip flipped in a hole, rolled, then was knocked over by the next hole. He attempted a roll, but his efforts were disrupted as he dropped into more pourovers just downstream. He was still attempting to roll when he slammed into the final set of holes against a cliff on the river left bank. Below here he let go of his paddle and floated upside down, still in his boat.

His friends lost track of him momentarily. They assumed he had bailed out and swum. After searching the bottom of the drop, they began searching the river downstream of the rapid by car. They saw Filip’s kayak floating near an island, and when they went to retrieve it they found Filip still inside. Then Filip and his boat got away from them, washing through The Narrows. Below here they made multiple attempts at rescue. A mile further downstream Filip fell out of his boat. His friends caught up, retrieved him, and began CPR. But 45 minutes had elapsed, and they were not successful.

1. (Banks) Filip probably hit his head in the last set of holes, and the impact left him helpless.

2. (Walbridge) Shore-based rescue has its limits because it takes a long time to move people downstream. There is usually no substitute for having a boat in the water.