Harland Adams was a longtime Aspen resident who died at age 73 on November 28, 2005 at a Cape Canaveral, Florida hospital.  He was born on November 26, 1932; his death was two days after his 73rd birthday.  At various times he and his wife owned a cabin between the Campground run and Lower Powderhorn on Snowmass, lived in Merritt Island, Florida, and also maintained a condominium in Snowmass Village.  In 1983 the Snowmass ski run "Village Bound" was renamed after him because of a charitable contribution he made.  The Aspen Skiing Company spells the name of the run three different ways.  The ski trail map and some signs on the mountain call it "Adams' Avenue."  Other signs on the mountain say "Adam's Avenue" or "Adams Avenue."  See photos below.  The Aspen Times Weekly article noted below uses "Adams' Avenue."  In the summer a part of "Adams' Avenue" is turned into a bike trail and is called "Snowmass Way (Adams Avenue)."  More on the story of the renaming of the ski run to "Adams' Avenue" in 1983 is contained in an article from the Aspen Times Weekly of September 16, 2008:  https://www.aspentimes.com/news/25-50-100-years-ago-136/    The following is a quotation from that article:

"Ever wonder how some of the area’s ski runs got their names?   Here is an example involving two runs, one on Aspen Mountain and the other at Snowmass Ski Area.  Only one run, on Aspen Mountain was initially up for naming rights in a celebrity-benefit bidding contest to raise money for The Aspen Foundation, which was the fundraising arm of the Skico and precursor to today’s Aspen Community Foundation.  But the two leading bidders, Harland Adams of Aspen and Gene Reardon of Denver, agreed to make it a tie.  Adams [the winner of the bidding war] said that he really wanted to rename a run at Snowmass, where he lives, and Reardon agreed to match Adams’ bid of $40,000 ... and $80,000 was raised.  Kruezeck run on Aspen Mountain will now be known as Gene Reardon’s Run [after the bidder’s father] and Village Bound run at Snowmass will now be known as Adams’ Avenue."

An obituary for Harland Adams appeared in the December 8, 2005 issue of the Aspen Times.

He was a grandson of Colonel Harland Sanders (Col. Sanders of Kentucky Fried Chicken--KFC).  He was on the board of directors of the company for a time, resigning in August of 1970.  At one time the slogan of KFC was “It’s finger lickin’ good” and that slogan was used in the Harland Adams Plaque (but the word “licking” was used instead of “lickin’”.)

(An interesting side note about Harland Adams:  He also made a multiple sclerosis charitable contribution that gave him the right to rename a run at Aspen Highlands.  The run was called "Floradora" (after the Aspen Lodge) and he had the run renamed "Scarlett's Run" after his wife, Scarlett.  See Warren Ohlrich's book "Downhill Ski Trails" p. 70.) 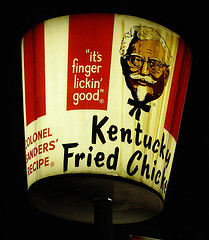 Life was finger licking good, I had a great time."

Below the plaque is a photo of Harland Adams, apparently licking his fingers.

The Harland Adams Plaque is located near the Adams' Avenue run at Snowmass.

Thanks to David Wood, Jr. for showing this plaque to the author.

See an article by David Wood that appeared in the Snowmass Sun newspaper issue of March 21, 2012, "Snowmass Memorial Shrines,"
(This article is set out in full below at the bottom of this page.) 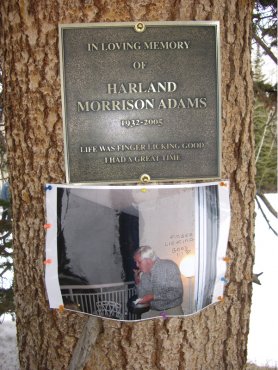 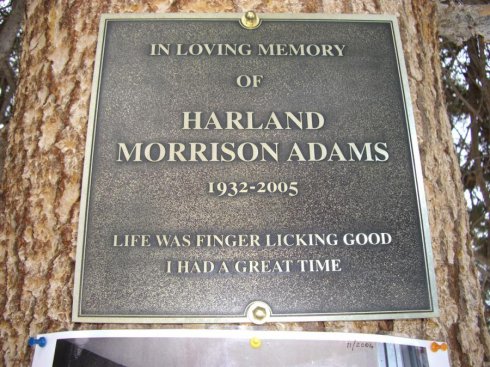 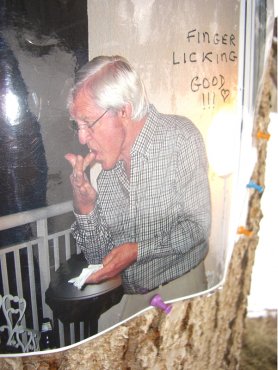 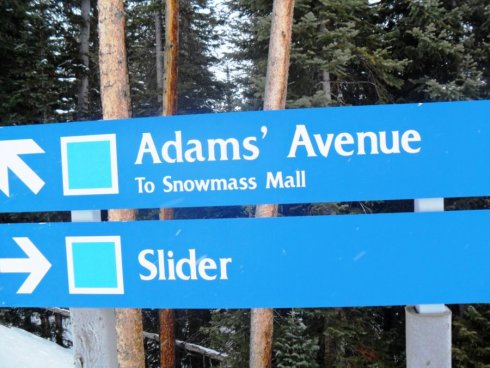 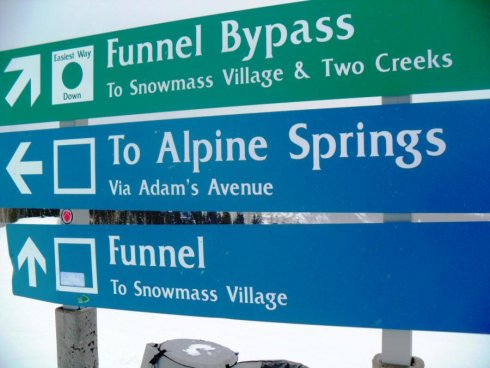 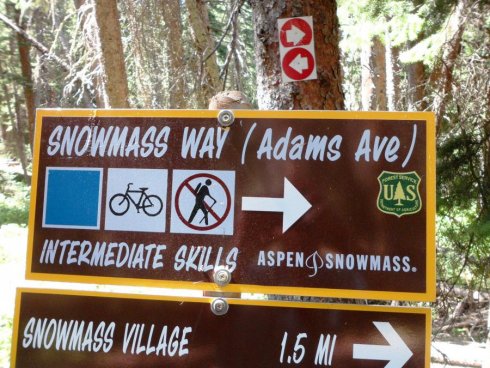 The photos in this section were taken in December 2019 and January 2020. 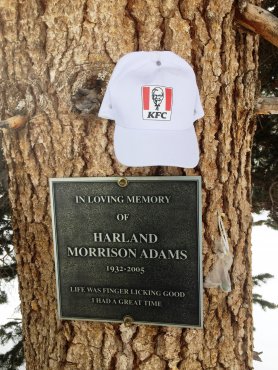 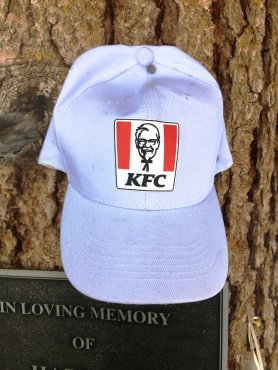 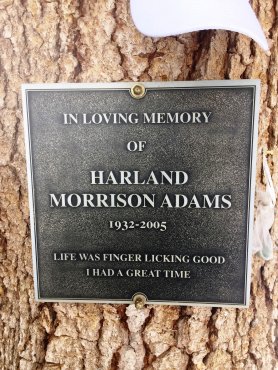 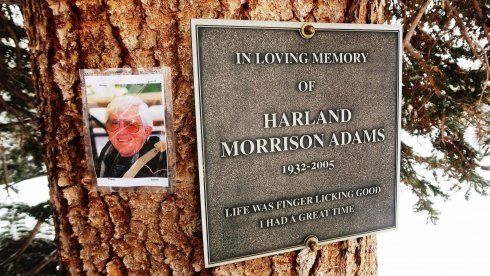 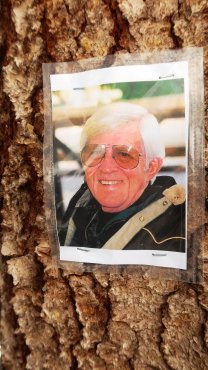 Below is an article by David Wood that mentions the Harland Adams Plaque and which appeared in the Snowmass Sun newspaper.

He was a grandson of Col. Harland Sanders (Col. Sanders of Kentucky Fried Chicken-KFC) and was on the board of directors of the company for a time. There is a brass plaque mounted on a tree on Adams' Avenue dedicated to him, which reads: “In Loving Memory of Harland Morrison Adams 1932-2005, Life was finger licking good, I had a great time.” Below the plaque is a laminated photo of him, in which he appears to be licking his fingers. The Aspen Skiing Co. spells the name of the run three different ways on its on-mountain signs: “Adams Avenue,” “Adams' Avenue,” and “Adam's Avenue.” On the trail map it is shown as “Adams' Avenue.”

Nicholas Blake Davidson was a Snowmass Village resident who was killed in an avalanche in the general vicinity of Rayburn's Chute on Snowmass on Dec. 21, 2006, at the age of 25. His memorial shrine is located within a couple of hundred yards of where the avalanche occurred, and consists of a built structure, several swings hung by ropes from beams, a pair of crossed skis, a sign that says “Blake D. Skis With Me, High Society” and many other items. There is also a bench nearby with the phrase “In memory of Blake Davidson, Freedom is a Word Not Heard From Those That Own It,” carved in the seat-back. This is the last quote he posted on his Myspace page, and it is also part of the lyrics from a song called “My Cadillac” by Atmosphere, one of his favorite hip-hop groups. After his death, the Kenichi restaurant in Aspen named a sushi roll after him.

The shrine for Paul Krauss

Paul Krauss has two memorial benches at Snowmass. One is on the Snowmass Mall and is made of red snowboards and has a plaque that states: “In memory of Paul Krauss. He brought snowboarding to Snowmass and snowboarders to Burnt Mountain. Enjoy your ride with Pablo.” The other bench is near the top of Burnt Mountain and has a brass plaque on it which states: “Paul L. Krauss, Snowboard Pioneer, 1963-1999.” 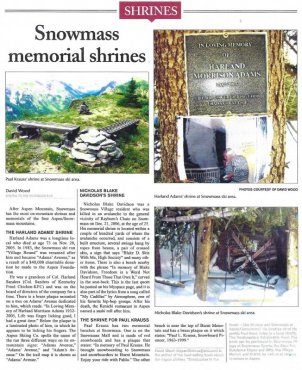