The Hangman’s Noose is located near the Hanging Tree run on Aspen Mountain.  According to Neal Beidleman (p. 30 of his 2006 book Aspen Ski and Snowboard Guide), "a hangman's noose has swung there for decades."    Also see the December 28, 2012 article in the Aspen Daily News by Curtis Wackerle, "Hanging Tree noose on Ajax a curious relic of Aspen in the ’70s" which is reproduced below. This article contains much of the history of this noose. This is the link to this article:  http://www.aspendailynews.com/section/home/156110.

A photo of the noose is below. 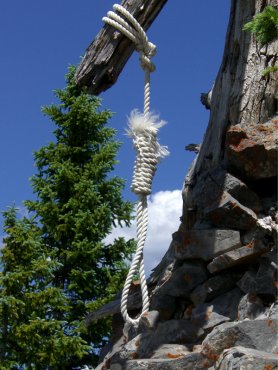 Observant riders of the Bell Mountain chairlift earlier this season — when the old two-seater was all they had because of a lack of natural snow up top — caught a glimpse of 1970s Aspen’s off-the-wall tastes and defiance of authority.

Perched near the top of Bell Mountain, off the Face of Bell side, a hangman’s noose dangles from an unnatural looking tree branch protruding above a rocky outcropping.

How it got there in the first place is unclear, but the noose dates back at least to the early ’70s. Later that decade, Aspen Skiing Co. executives ordered it removed in response to a distraught tourist, who said the sight churned up memories of her dead husband and ruined her vacation. But the noose was returned to the tree by a rogue band of mountain employees, time and again.

“At this point, the Bell Mountain noose facts have morphed into legend,” Aspen Mountain ski patroller and unofficial Ajax historian Tim Cooney wrote in an email.

The best explanation that both Cooney and former Aspen Mountain ski patroller Tony Vagneur could muster for why the noose was installed in the first place has to do with the tree it was originally dangling from. Beautiful, scraggly, set against the sky, what else would one do with a great old tree like that, Vagneur said.

“It was truly a work of art up there,” he said.

Wrote Cooney, “The chosen tree... looked like it came out of central casting.”

Vagneur signed up for ski patrol in his early 20s, college degree be damned, and early in his tenure was asked to tie the knot for a version of the noose.

“They figured I knew about hanging cattle rustlers and horse thieves because I was a ranch kid,” said Vagneur, who comes from one of the valley’s oldest ranching families. “So I retied it for ‘em with a lucky 13” wraps.

“This was eons before the gondola, so everyone had to look at it,” he said.

A few years later, someone complained about the noose to then-mountain manager Charlie Maddalone, whom Cooney described as an “irascible bulldog.” Maddalone ordered the noose removed by ski patrol, which it was, but within days, some mountain employees who lived at the top in a bunkhouse went rogue and it was reinstalled.

“I think they had been drinking a little beer,” Vagneur said.

To combat the insubordination, Maddalone had the tree branch cut down, Cooney wrote, prompting a “save the noose” campaign around town that included bumper stickers.

Noose proponents went as far as fitting the chopped-off branch, which was still on the ground under the tree, with a piece of rebar and attaching it back to the trunk, Cooney wrote. It eventually fell down, and that was that for some years. Eventually, “Maddalone retired, the statute of limitations passed, and patrollers rigged another branch onto the remaining trunk with the current noose,” Cooney said.

Today, the steep run that falls down from the noose toward the Ajax Express chairlift is called Hanging Tree, taking its name from the curious item and 1970’s Aspen drama.

Other management-labor flaps of the era included ski patrol putting up a sign near the Perry’s and Last Dollar runs in The Dumps when they were first opened, warning “no short skis,” Vagneur said. He wound up in then-SkiCo CEO D.R.C. Brown’s office, “explaining just what the hell ‘no short skis’ meant.”

“The sound reasoning fell apart under his stern gaze,” Vagneur said. “That was another [item] I had the privilege of taking down.”

Photo Credit with Byline:
Chris Council/Aspen Daily News
Photo Caption:
The origins of the Hanging Tree noose on Bell Mountain are obscured, but it was central to a labor-management dispute within the ski company in the 1970s. <br />< br />
archive_date:
1 day
active:
active
Source URL: http://www.aspendailynews.com/section/home/156110