The "Good Friends" bench used to be located on the Snowmass Mall, right outside the entrance to Venga Venga.  It was there until sometime in 2016 when it was removed, and it has not been on display there, or anywhere else, since then (this written in 2021).  Photos of it when it was on display outside Venga Venga are below in the first two sections of photos.  The third section of photos are of just the seatback.  It was dedicated to deceased Snowmass ski instructors, and was put in by Henrik Brusletto (see https://www.aspentimes.com/obituaries/henrik-brusletto/)

Up until sometime in 2011, this was carved into the back of the bench:

Good Friends We Have...

and Good Friends We Have Lost

Good Friends We Have...

and Good Friends We Have Lost

One of the people named here (Eric Smith) has a shrine on Snowmass. See this page on this web site:  https://aspensnowmassshrines.com/index.php?the-eric-smith-shrine-snowmass

One of the people named here (Doug Valley) has a shrine on Aspen Mountain.  See this page on this web site:  http://aspensnowmassshrines.com/index.php?the-doug-valley-shrine-aspen-mountain

Eve Pruden's name is on this bench; for more on her, see this page on this web site:  https://www.aspensnowmassshrines.com/index.php?the-eve-pruden-eves-rule-sign-snowmass

The photos in this first section of photos are of the original bench. 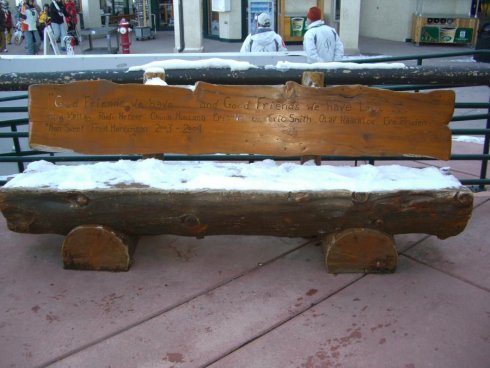 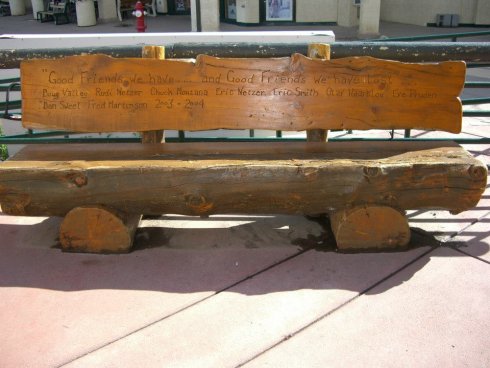 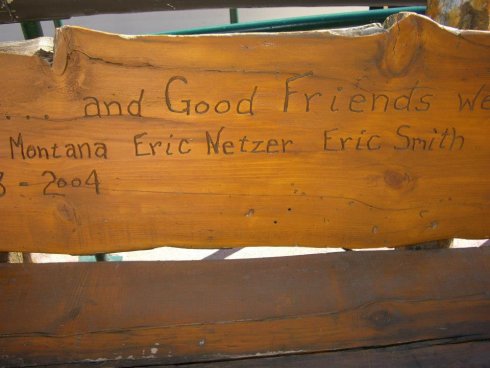 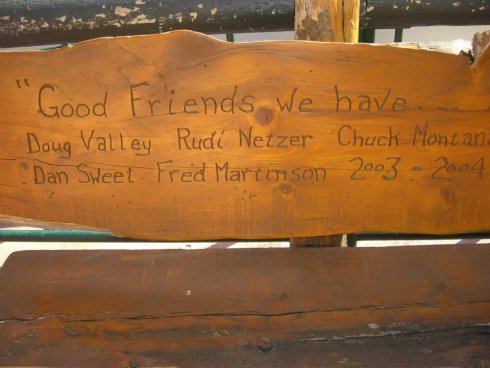 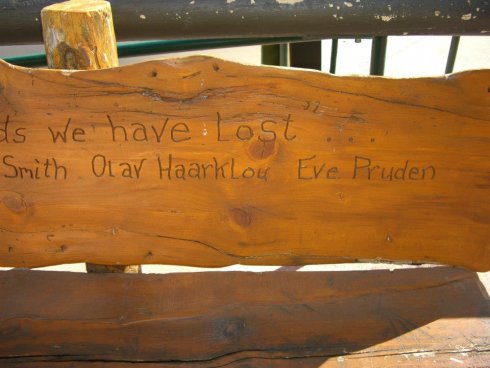 The photos below were taken in February 2012 and show the new seatback that was installed sometime in 2011. 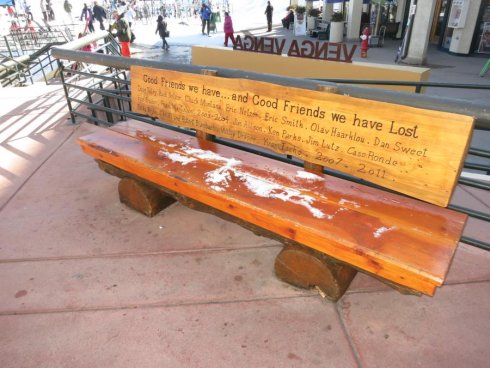 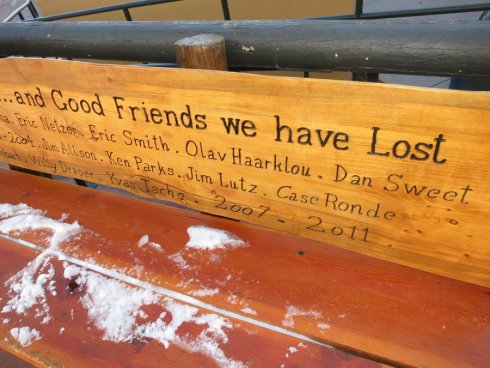 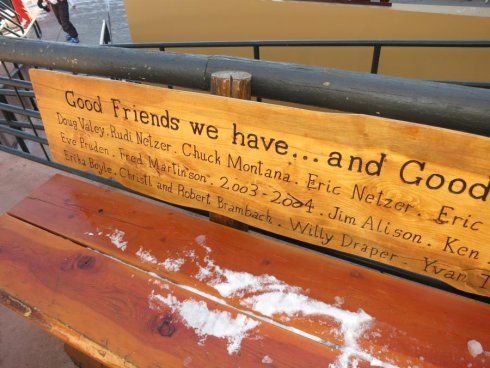 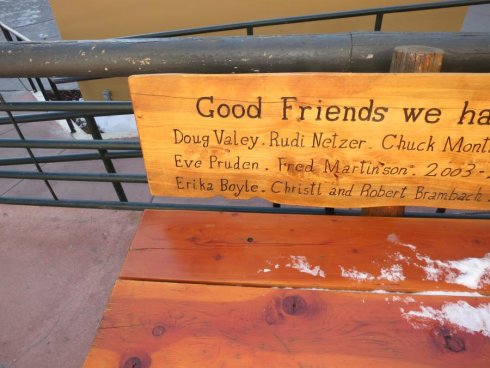 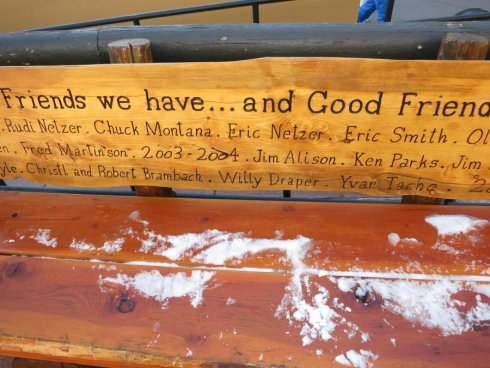 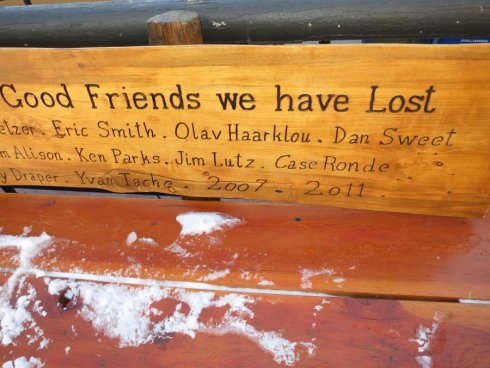 The photos in this section were taken on February 5, 2021 and show the seatback of the bench, where it is now being stored in a garage on the lower level of the Venga Venga/Timbermill building, next door to the bowling alley. 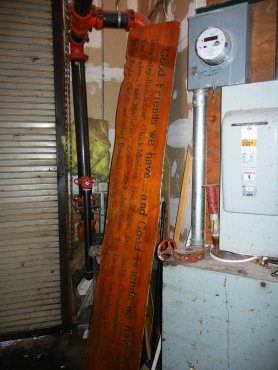 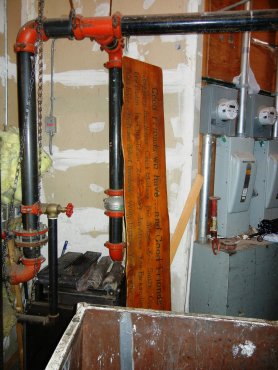 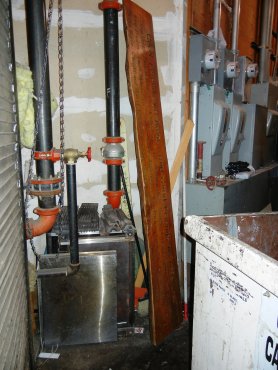 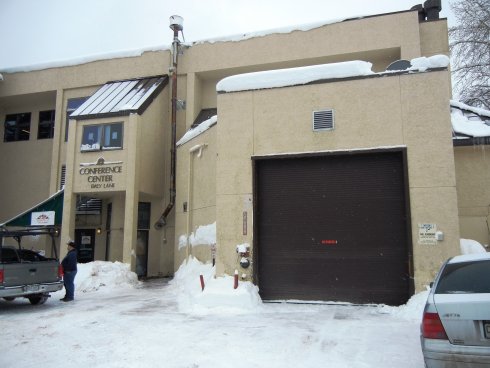 The seatback of the bench is in this garage next to the bowling alley.