The "Gondola Godiva" photo hangs on the wall inside Bonnie's restaurant on Aspen Mountain; the photos of it below were taken by the author in March of 2016.  It is located in the men's room on the lower level.  The Gondola Godiva photo was taken in 2003 and is of Gabriele Rico.  The photo was taken by her husband, Richard B. Ressman, M.D., Photosurgeon.  The photo is a part of a series of 26 nude photos that Dr. Ressman took of his wife that are collected in his book, "Godiva:  A Modern Pictorial Adventure."  The first of the photos was taken in Chicago in 1999, and the last in 2012 in Burbank, California.  Gabriele died on March 15, 2013.  Here it is on the wall at Bonnie's (click on images to enlarge): 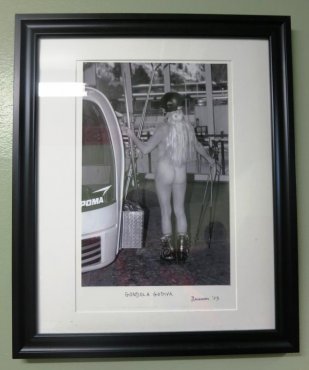 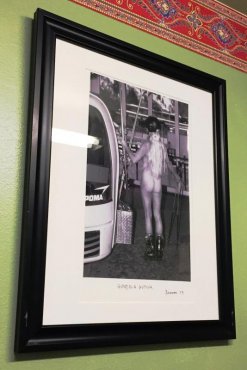 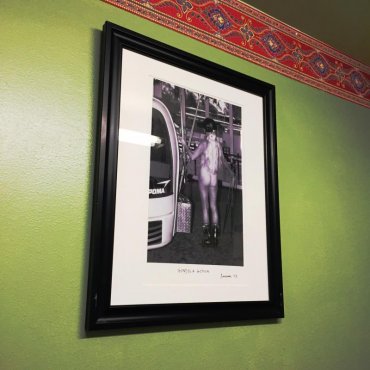 "Nearly two weeks after taking the Chairlift Godiva photo, we were ready to tackle the gondola at last.  After getting permission from the mountain manager to take an artistic photo, we went over to Aspen's Silver Queen Gondola well before it opened.  There wasn't anyone in sight.  Gabriele had been skiing wearing a windsurfing helmet that looked like something Darth Vader wore in Star Wars--I even made a Vader label to stick on the back of the head gear.  Gabriele had on ski boots and carried her poles.  For the photo she placed her skis in the gondola ski rack  and I took the photo.  Moments later we snuck off to get ready for the day's skiing, laughing at this latest success.  I was so pleased with the photograph that I gave a large print to Brigitte Birfelder, manager of Bonnie's Restaurant on Aspen Mountain. She, in turn, liked it so much she had it framed and hung it in the men's bathroom.  We both knew that if she hung it in the restaurant and one woman complained, she would have had to take it down.  Not one man complained!  I have taken a number of women into the men's bathroom to show them the photo hanging there.  Usually there is a man or two standing at the urinals, but no one ever seemed to care.  The last time I skied in Aspen the photo was still there, and I still taken women into the bathroom to see the photo.  And still no complaints!" 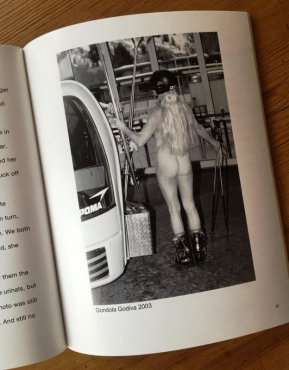 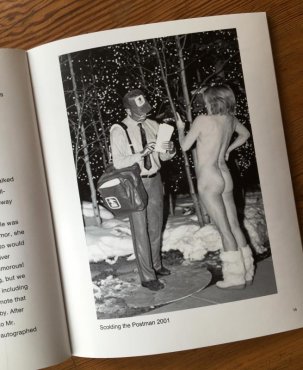 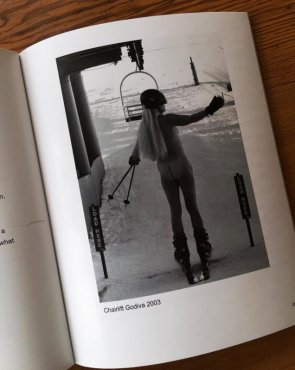 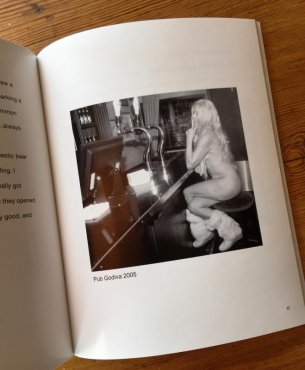 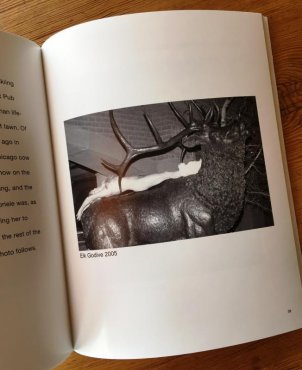 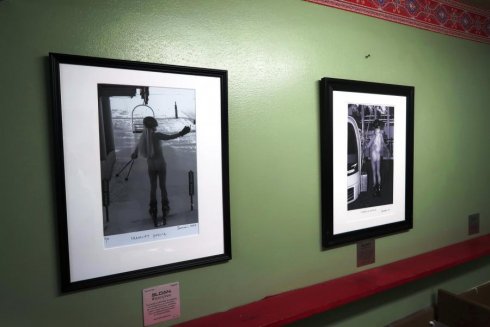 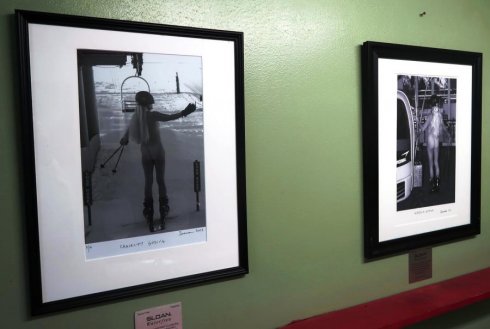 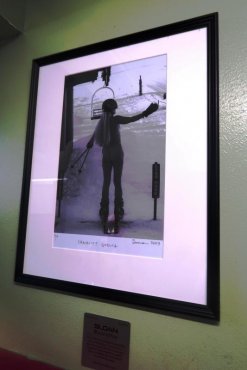 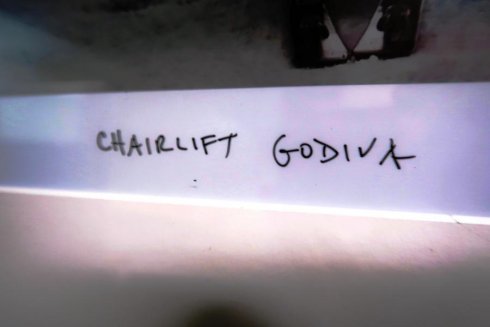 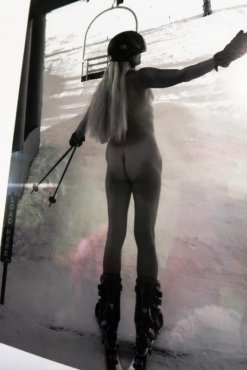 See below for photos of the front and back covers of the book, and of the dedication page.  Click on images to enlarge. 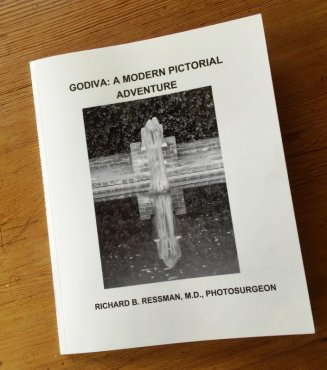 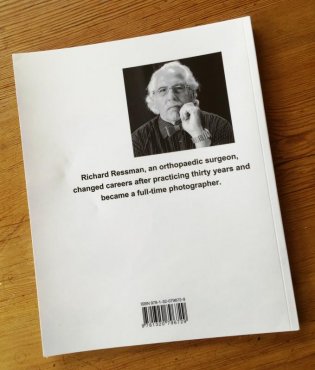 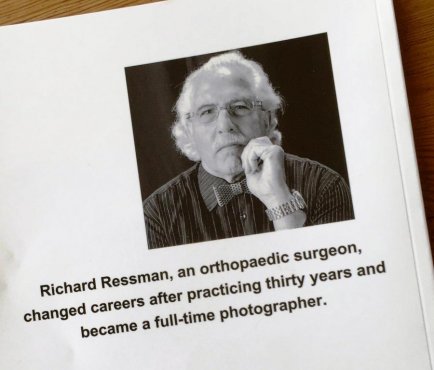 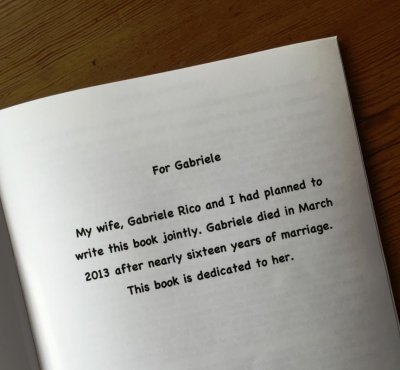 The book can be purchased on Amazon:  http://www.amazon.com/Godiva-Pictorial-Advanture-Richard-Ressman/dp/1320681689/ref=sr_1_9?ie=UTF8&qid=1457050213&sr=8-9&keywords=ressman  The page indicates that it is a 2015 book and contains this description:  "Photos of the author's wife wearing a long wig and not much else posing as Lady Godiva in different and unusual locations."
In a February 17, 2016 e-mail to the author, Dr. Ressman stated the following:  "You might be interested in knowing that the photo of Gretl Uhl next to her chair was taken and printed by me (see this page:  https://www.aspensnowmassshrines.com/index.php?the-gretl-uhl-chair-and-plaque-aspen-mountain)   Gretl was a friend and my first ski instructor in Aspen in 1963; her husband Sepp was also my racing instructor."
For more on Dr. Ressman, see "About the Artist" on this web page:  http://photosurgeon.net/about/, quoted here:

"Richard Ressman bought his first Nikon camera in 1969 as a surgical intern in Chicago and has been taking photographs since. He developed and printed his first photos in his eleven by seven foot Intern’s call room. In 2002, he changed careers from that of an orthopaedic surgeon to full-time photographer. Exhibits include three photos in the eMotion Pictures Exhibit sponsored by the American Academy of Orthopaedic Surgeons which traveled to San Francisco, Chicago, Washington D.C., New York, and Madrid, Spain. He had a photo of Bo Diddley in the 2008 eMotion Pictures Exhibit which opened in San Francisco March 2008. More recent exhibits include photos displayed at the Triton Museum of Art in Santa Clara, California both in 2012 and 2013.

Dr. Ressman practiced orthopaedic surgery for thirty years before becoming a full-time photographer. He did everything from operating on fractures to replacing arthritic knees and hips. Trauma call was often brutal since it often involved going to the hospital to treat automobile accident and gunshot patients in the middle of the night. Now he chooses to get up before sunrise and take photos of his choice. He also takes photos as a volunteer for an infant bereavement organization, Now I Lay Me Down to Sleep. Parents of stillborn or dying infants need only call Dr. Ressman and he will drive to a local hospital, set up a small studio in a hospital room, take photos and produce a CD and DVD that the parents can treasure.

Dr. Ressman recently donated all his unused surgical equipment.  He convinced two orthopaedic equipment companies to donate thousands of dollars of equipment, and as a volunteer taught surgical techniques to surgeons in Ho Chi Minh City, Viet Nam. His reason: The Vietnamese people suffered enough during the Viet Nam-American war and he wanted to give something back to the Vietnamese people. It was a very rewarding experience for everyone involved.

Dr. Ressman continues to shoot with Nikon equipment using the latest D4 and D810 single lens reflex full-frame digital cameras as well as PhaseOne medium format digital equipment. Dr. Ressman now feels he can make much better images with the professional digital camera than he could with film. He lives in the San Francisco South Bay area. His wife of nearly sixteen years, Gabriele Rico, passed away March 2013. She was a professor of Humanities and Creative Arts at San Jose State University and author of books, chief among them being Writing the Natural Way, which has been in bookstores for more than thirty years. Four children and four grandchildren are living in Seattle, Los Angeles, San Diego, Chicago, and Spain."