The Glenn Frey Shrine is on Aspen Mountain.  He died in January of 2016.

Two photos of it that were taken in the summer of 2019 are below (photo credit Mike Britt).  Click on images to enlarge.

See the Aspen Times article by Andrew Travers that is set out in full below the two photos. 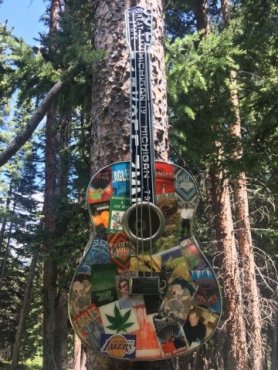 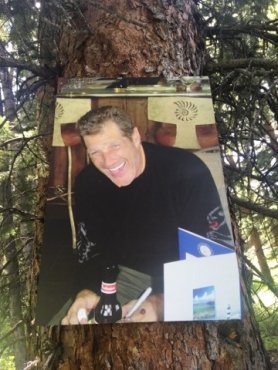 A rustic creekside cabin in Old Snowmass that was a longtime recording studio for The Eagles’ Glenn Frey has transformed into a hub for local musicians.

Mad Dog Studios also is opening its doors to the public for events, including this summer’s Ride + Dine series, hosted by The Little Nell.

Frey bought the property from fellow music legend Jimmy Buffett, who originally purchased it in 1976. Frey and Buffett memorialized the wild caretakers’ parties there in their co-written 1985 song “Gypsies in the Palace.”

Frey converted a log-built structure, which had been Buffett’s garage and office, into a professional-grade recording studio in 1986 with design help from Frank Comentale of the Hit Factory in New York. Frey, who also lived in a house in Woody Creek, dubbed it Mad Dog Studios and made it his creative home in the mountains. He recorded there regularly over the next three decades, most notably making his 1992 solo album “Strange Weather” at Mad Dog.

Frey moved his studio equipment out of the space around 2010, as he spent less time here and did more recording in Los Angeles.

The Rock and Roll Hall of Famer placed the property under contract with local buyer Julie Garside and partners in early 2016, just days before his death at age 67.

Since taking over the property, Garside has redesigned and renovated the 3,000-square-foot main house, while partnering with property specialist Tami Word and locally based music industry professionals to bring the studio back to rocking life.

“We want to continue the legacy of the property that Frey and Buffett began by making more wonderful memories in our little mountain community and foster the music culture of Aspen and the valley,” studio partner Tami Word said.

On a late summer evening, the Aspen-based bandleader Derek Brown was jamming inside Mad Dog with a crew of local musicians who included guitarist David Harding and drummer Pete Durrance, as spandex-clad cyclists arrived for the Little Nell dinner and tour, crossing the tin-roofed footbridge over Snowmass Creek.

“The whole music community, up and down the valley, is here,” Brown said between songs.

Under Word’s management, the studio has become a sort of clubhouse for Roaring Fork Valley musicians. Over the past two years, a who’s who of local musicans have recorded at Mad Dog, from Bobby Mason to Hap Harriman, Jon Michel and Michael Jude to Suzanne Paris and Bo Hale.

The reborn studio was designed by Mad Dog partner and house engineer Ralph Pitt, a music industry veteran who designed Belly Up Aspen’s sound system and oversaw it for years. He was working the boards as Brown and company jammed.

Along with the Nell events and professional recording sessions, Mad Dog is hosting songwriting retreats for veterans recovering from post-traumatic stress disorder, in partnership with the nonprofit Challenge America.

“We would like to open our doors to philanthropies we feel are truly making an impact,” said Word.

She said Buffett also returned to the studio in August to see what the new owners have done with the place, and spent time on-site reminiscing with Word and the Mad Dog crew about his days there with Frey.

The main house includes Eagles memorabilia, like a collection of framed Frey guitar picks, and artistic touches like a hand-carved bathroom door (by some accounts fashioned from the wood of a Buffett boat). The true musical treasure of the property is a collection of 40 reel-to-reel tapes of Frey recordings that he left behind at Mad Dog. They’re fragile due to their age and Brown said the contents are unknown. Frey’s wife, Cynthia, he said, has instructed the studio to hang on to them and preserve them until they can attempt to play or transfer them to digital files.

“That’s the history vault,” Brown said of the tapes. “We don’t know what we’re going to do with them.”

The Nell’s Ride + Dine group biked roughly 15 miles from lower gondola plaza in Aspen to Mad Dog on Snowmass Creek Road. The Ride + Dine program sends cyclists on a guided ride to a destination where they’re treated to an opulent al fresco Nell-catered dinner, in this case on the porch at Mad Dog. The series’ second and final 2019 Ride + Dine runs Tuesday, with a return ride to Mad Dog.

The August ride was guided by Little Nell general manager Jonathan Fillman, who led a peloton of cyclists and e-cyclists down the Rio Grande Trail to Old Snowmass and up Snowmass Creek Road to the idyllic riverside studio and compound.

The Nell events are among the first times the general public has been welcomed onto the property and into the studio, which may be the beginnings of a more robust event business there for creative retreats as well as parties and weddings.

“It’s such a cool environment,” said Brown. “And people who aren’t musicians would never get to see it. So we’re excited to share it.”