Watch for the red and white "Gaard's Gulch" sign on the east side as you ascend Aspen Mountain in the Silver Queen Gondola.  It is thought that the sign refers to Gaard Moses, a graphic artist, whose home was near the bottom of this gulch, at 800 S. Alps Road in Aspen.  See the two articles about Gaard Moses in the section following the photo of the sign below.

If you have information or photos to contribute for use on this page, please send to the author at AspenShrines@aol.com. 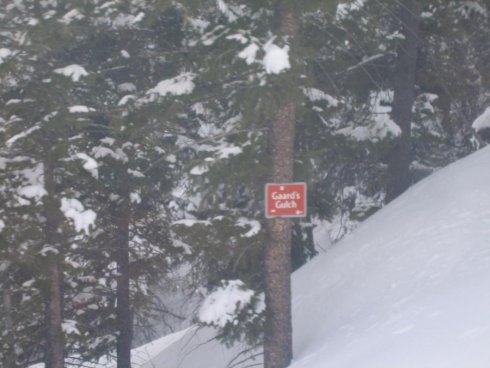 Signs of the Times
Aspen Sojourner--Holiday 2009
By Michael Cleverly

In the early years, when Aspen was inventing itself, the commercial core was made up of small, one-of-a-kind shops, shops owned by people who were part of the fabric of the community and that catered to the needs of the diverse and eccentric citizenry as well as tourists. Beginning in the 1970s, any visitor wandering Aspen’s downtown couldn’t help being struck by some of those shops’ beautiful, unique signage. Lettered small, in the corner of most of the best of them, was “Gaard Graphic,” the business name of sign maker Gaard Moses. The visitor might have turned from appreciating the sign and encountered a nice lady in a cowboy hat draped with signs fore and aft. Inspired by another era, it would have been Pat Milligan—“the sandwich-board lady.”

Pat and Gaard are both still here, alive and well, still plying their trades and enjoying the mountains and community they’ve loved for so long. But they are islands in the stream, and progress has swirled around them and continued on, changing the town for good or ill, with little regard for what came before. Their archives, the signs Gaard created and Pat carried around for years, have inadvertently become a record of the businesses they advertised, many long gone and all but forgotten.

Gaard Moses came to Aspen in 1968. He says, “I spent the first year at a number of jobs: musher at Toklat, wine steward at The Red Onion, bouncer. Then Harley Baldwin called. He had purchased a development up Reudi and asked if I could paint some real estate signs.” Baldwin and Moses had been classmates at Syracuse University, where Gaard focused on industrial design, photography and commercial art. Those first signs for Baldwin were purely functional and led to what Moses says was his next job: “I painted a no parking sign for the, then, brand new North of Nell building. It was ugly as hell; I still have it.” He was paid $35 for the job. “It doesn’t seem like much, but I was only paying $25 a month rent at the time.” Gaard was sharing a few square feet of apartment space with three other guys above the legendary “Paragon Ballroom” on what would become the Hyman Avenue Mall.

Gradually, Gaard’s customers began to take advantage of his huge artistic talents, and his signs began to be much more than simply informational. The more art he put into his signs, the more customers wanted artistic signs. This led to some of the most beautiful and memorable signs and logos to be seen here or anywhere else. Tom Mix Flying School, Little Annie’s, the Wienerstube and the Aspen Optical Shop were just a few. Those early efforts led to much bigger things. He was hired to do the outsized murals “Dry Climate Cigars” and “Kobey Clothiers” on the exterior brick walls of two prominent downtown buildings. The Aspen Historical Society and private individuals paid for the murals. They didn’t advertise any existing businesses; they were done simply to beautify the town.

Business got very good, and Gaard formed a symbiotic relationship with legendary Aspen blacksmith and artist Francis Whitaker to make his hanging brackets and eventually learned welding himself so he could be more a part of that process. At one point Gaard employed three other designers and sign painters in his shop.

By 1985 Moses was so well respected that he was tapped to help write new sign codes for the city. He reminisces: “There was a sign code. It was pretty vague and had existed since 1954, but (former Aspen Mayor) Bugsey Barnard was able to use it to justify cutting down every billboard between Aspen and Glenwood Springs in one night.” The new code was more specific, so that sort of measure wouldn’t be necessary in the future.

Gaard’s current focuses are a series of original prints and handmade frames in the “arts and crafts” style, also, the beautiful little contracts that he would draw by hand for his sign customers. The contracts included an exquisite rendering of the sign, along with dimensions, color details and the usual legalese. Four decades have rendered many boxes of these jewels waiting to be displayed or published.
One of Gaard’s clients over the years has been Pat Milligan.

Milligan begins, “At one point I realized I was addicted to the mountains, so I just stopped trying to fight it.”

Pat arrived in town in 1978. Originally from Chicago, she had come from Santa Barbara and had lived 10 years in England, Spain and Switzerland prior to that. Asked how she chose Aspen, she explains, “I saw a TV miniseries, ‘Aspen,’ and realized there were mountains in America.”

Her career came about almost accidentally. “The Little Kitchen was a macrobiotic restaurant where Su Casa is currently located,” she says. “I loved to eat there.” Since things were lean that first winter, Pat had to figure out how to eat on no budget. “I talked them into letting me carry a sandwich board around for $300 a month plus food.” A voice spoke to Pat, and she realized that the road to inner peace was through self-employment. The following year her client list swelled to six and she was in business.

Milligan charges by the hour, serving two clients at a time, front and back, with the space on the front being slightly more expensive. She prides herself in only having raised her rates three times in 30 years. Business has changed in all that time. At one point she had 20 clients and would work till 8 or 9 p.m. The evolution of downtown Aspen has her working just a few hours a day now, with après ski being primetime in winter and the lunch hours peak time in summer. She works about three-and-a-half months in the winter and three in the summer, giving directions and answering all the expected questions. When asked if she had a favorite dumb question she says, “ ‘Do you live here?’ Do I look like a tourist?” she adds rhetorically. While she admits that good-natured interfacing with the public is part of the job, she also adds, cryptically, “I am not what I do—90 percent of the energy I expend on the street is ego feedback and surface static.”
Pat has saved 160 of the 212 signs she’s carried through the years, all in pristine condition. She has had two shows at The Pitkin County Bank and Trust in its former location across from Little Annie’s. Eventually she would like to sell the signs to someone who is in a position to donate them to the historical society or to someone who could market them. Her chosen path has no retirement plan.

While Aspen continues to dazzle the world and be a magnet for the rich and famous who appreciate the new and unique as well as the timeless beauty of the mountains, there are many things worth remembering, the stores and restaurants that were part of the growth of a young ski town, now gone, that make up a rich heritage. Pat Milligan and Gaard Moses and what they’ve preserved are part of that heritage.

This article appeared in the Holiday 2009 issue of Aspen Sojourner.

Come Thursday he will leave that comfort zone and expose his work in a different way when his exhibition, “One Man Show,” featuring nine water colors and one silk-screen opens at the Woody Creek Art Studio. Instead of finding out what a client wants, then creating it, Moses will put out work he created then “hope somebody pays for it.”

“I have no idea how this stuff is going to sell. If it works, great,” Moses said recently from his cluttered but comfortable home and studio at Lazy Glen Mobile Home Park near Basalt. And if not, he said, “I can always blame the economy.”

An opening reception for “One Man Show” will be held at the Woody Creek Art Studio from 4-7 p.m. Thursday.

This new kind of exposure is both exhilarating and a little nerve-racking for the 64-year-old artist. It's not the sure thing he relies on as a commercial artist. But he is eager to learn if the watercolor painting that has long intrigued him is commercially viable.

Moses worked on most of the watercolors last year in his summer home and studio of 35 years in the Yukon Territory, 80 miles from White Horse, Alaska. The paintings are in the 1920s mountain bungalow-style.

“I was trying to get the look of the 1920s travel posters,” Moses said.

Some of his work features themes from travel posters as well — 1920 America's Cup, the running of the bulls at Pamplona and the Red Jammer classic touring vehicles at Glacier-Waterton Parks.

One piece commemorates the famed 1949 Goethe bicentennial celebration, the event that put modern Aspen on the map, in the style of an 8-cent U.S. postage stamp.

Moses said he has long admired watercolor painting because of the planning required and the precision demanded. A painter essentially has to work “from the back up,” starting with the background then proceeding to the outer layers.

“Water is the most difficult of all mediums,” he said. “You have to have a totally composed idea before the brush hits the paper.”

Moses enjoys the planning as much as the execution. Watercolor is the collection of many parts, he said. You can start with sketches, but once the brush hits the paper, it's a done deal.

“It's the difference between putting out a Thanksgiving dinner and making your kid a cheeseburger,” he said.

Two pieces in the show weren't created at the Yukon studio. Instead, they are rooted in Aspen. One is Moses' 2003 painting of the iconic Crystal Mill. The other is the only silk-screen in the show. It features two classic mountain men with the slogan, “You meet the nicest people in the mountains.”

It's Moses' take on a similar black-and-white poster produced in the late 1960s by the late Fritz Stammberger.

Moses also made frames of wood or steel for all the pieces in his show. Most of the watercolors in the show are fine-art prints using giclee. George Stranahan digitally photographed Moses' watercolors and re-created them using ink-jet printing. Moses was astonished by the result.

“I have to get up close to tell the difference,” he said.