The information about Fred Iselin quoted below is from the web site of the Colorado Ski & Snowboard Museum Hall of Fame.  See:  http://www.coloradoskihalloffame.com/images_bio_htm_files/Fred_Iselin.htm

"Fred Iselin was born in Glarus, Switzerland and became known for his skiing abilities before he appeared on the American scene in 1940. Fred was exposed to skiing from the time he was born. His father, Christof, was an officer in the Swiss Army with foresight and realized the value of skis for mountain transportation. Fred virtually grew up on skis. While in his teens, Fred taught skiing in Switzerland and later in Austria. During the late thirties, some of Fred's impressive victories were the Grand Prix de Chamonix at Glaciers, the Brevant-Chamonix, and the Lognon Downhill. His most impressive win was the all-time record at the Grand Prix de Aiguille du Midi – this race was discontinued because it was too dangerous. In 1939, Fred immigrated to the United States and became a ski instructor at America's premiere ski resort – Sun Valley, Idaho, in 1940. In 1947, Fred moved to Aspen, Colorado, to become Colorado's notable ski instructor and pioneer of innovations of skiing. An instructor 'par excellence' for over 40 years, his achievements include ski school director for Aspen and Aspen Highlands and author of a best selling book on ski techniques, 'Invitation to Skiing.' The book was twice revised under the titles, 'The New Invitation to Skiing' and 'Invitation to Modern Skiing.' These books express the personality of Fred perfectly. The text is witty; they are fun to read and fun to use – as if Fred is teaching in person."

The following quoted material was found on a Heritage Aspen web page:

"Fred Iselin arrived in Aspen in 1947, a year after the chairlift, Lift-1, and the Aspen Ski School debuted. He had taught skiing with Friedl Pfeifer at Sun Valley before the war. In Aspen, he became the ski school's co-director where he earned a reputation as a warm and gifted teacher and a bold and graceful skier. He had a knack for remembering names, and he lured many visitors from Hollywood in the early 1950's. He was also known as an entertaining show-off and became a regular at Aspen's legendary 'après ski' life. It was once said of him that he 'never drew a serious breath in his life.' 'The greatest sensation in skiing is the feeling of floating,' Iselin wrote before his death in 1971—a gospel he preached and practiced equally."

Fred was inducted into the Aspen Hall of Fame in 1989.  See this video:  https://www.youtube.com/watch?v=Fziodmh9vx0

The Fred Iselin plaque and cairn is located near Cloud Nine at Aspen Highlands.   Photos of it are below.  The plaque reads as follows:

The following is stated in John Moore's 2018 book, "A History of Aspen Highlands" on page 86:  "His ashes are contained in a stone cairn near the top of the Cloud Nine lift." 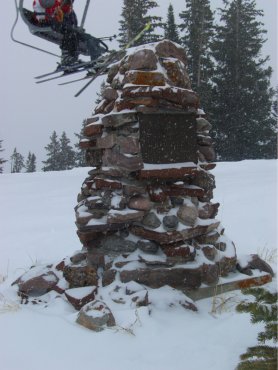 The Fred Iselin plaque and cairn near Cloud Nine. 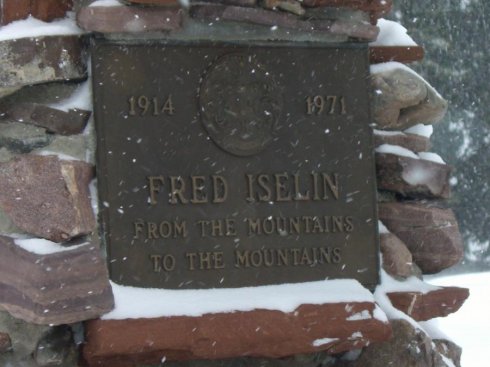 The Fred Iselin plaque and cairn near Cloud Nine.

This photo of Fred and his dog Bingo hung inside the Merry-Go-Round at Highlands (as of December 2013).  Click on images to enlarge. 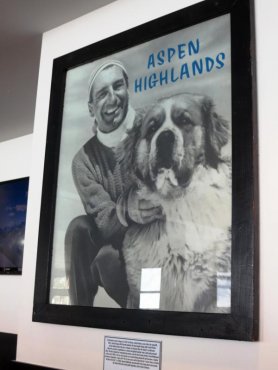 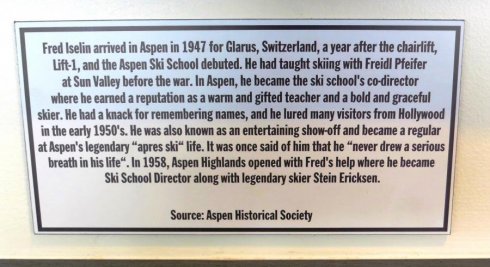 See the 3 photos below regarding one of Fred's books about skiing.  Click on images to enlarge. 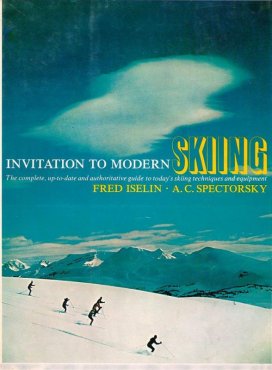 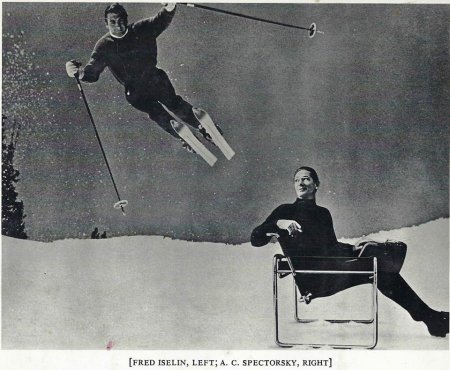