The Frank Sinara Shrine on Snowmass consists of several laminated photos of him, all on one tree.  Photos of it are below.

This is from the Wikipedia site:  "Francis Albert "Frank" Sinatra (December 12, 1915 – May 14, 1998) was an American singer and film actor. Beginning his musical career in the swing era with Harry James and Tommy Dorsey, Sinatra became an unprecedentedly successful solo artist in the early to mid-1940s, after being signed to Columbia Records in 1943. Being the idol of the "bobby soxers", he released his first album, The Voice of Frank Sinatra in 1946. His professional career had stalled by the 1950s, but it was reborn in 1954 after he won the Academy Award for Best Supporting Actor for his performance in From Here to Eternity. He signed with Capitol Records in 1953 and released several critically lauded albums (such as In the Wee Small Hours, Songs for Swingin' Lovers, Come Fly with Me, Only the Lonely and Nice 'n' Easy). Sinatra left Capitol to found his own record label, Reprise Records in 1961 (finding success with albums such as Ring-a-Ding-Ding!, Sinatra at the Sands and Francis Albert Sinatra & Antonio Carlos Jobim), toured internationally, was a founding member of the Rat Pack and fraternized with celebrities and statesmen, including John F. Kennedy. Sinatra turned 50 in 1965, recorded the retrospective September of My Years, starred in the Emmy-winning television special Frank Sinatra: A Man and His Music, and scored hits with "Strangers in the Night" and "My Way". With sales of his music dwindling and after appearing in several poorly received films, Sinatra retired for the first time in 1971. Two years later, however, he came out of retirement and in 1973 recorded several albums, scoring a Top 40 hit with "(Theme From) New York, New York" in 1980. Using his Las Vegas shows as a home base, he toured both within the United States and internationally, until a short time before his death in 1998. Sinatra also forged a successful career as a film actor, winning the Academy Award for Best Supporting Actor for his performance in From Here to Eternity, a nomination for Best Actor for The Man with the Golden Arm, and critical acclaim for his performance in The Manchurian Candidate. He also starred in such musicals as High Society, Pal Joey, Guys and Dolls and On the Town. Sinatra was honored at the Kennedy Center Honors in 1983 and was awarded the Presidential Medal of Freedom by Ronald Reagan in 1985 and the Congressional Gold Medal in 1997. Sinatra was also the recipient of eleven Grammy Awards, including the Grammy Trustees Award, Grammy Legend Award and the Grammy Lifetime Achievement Award."

This article, "Menter: The Chairman of the Board" by Paul Menter and about Frank Sinatra, was in the Aspen Daily News on December 12, 2018.  The article mentions my Aspen Shrines web site in this quote:  "According to the website http://www.aspensnowmassshrines.com/, there is a Frank Sinatra shrine, consisting of laminated photos of the Chairman of the Board on a single tree, someplace on Snowmass mountain. I’ve never seen it myself, but it would be worth finding."  Click this link for the article:  https://www.aspendailynews.com/opinion/menter-the-chairman-of-the-board/article_b67d9170-fdd2-11e8-9218-d39337296a1e.html?fbclid=IwAR3m9fKNr4nA6AE6MaemLhEz4NVdsJPUF8AQ02xOxRVgl_VxUFs3D1jWd1U 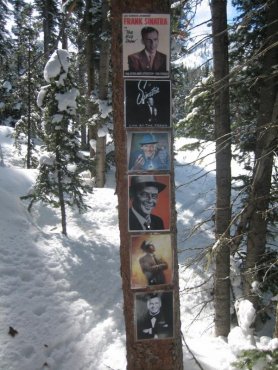 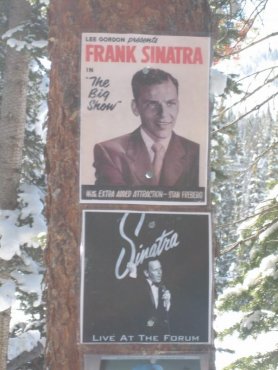 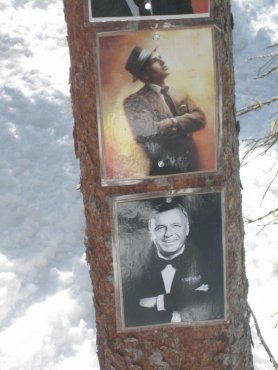 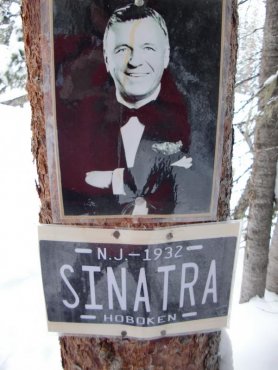 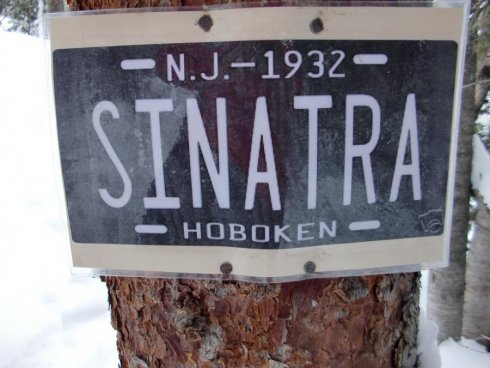 The photos in the section immediately below were taken in January 2012.  All of the items in the Shrine seem to have been changed from what was there before. 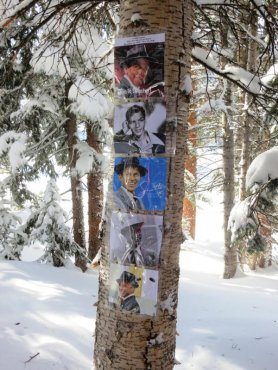 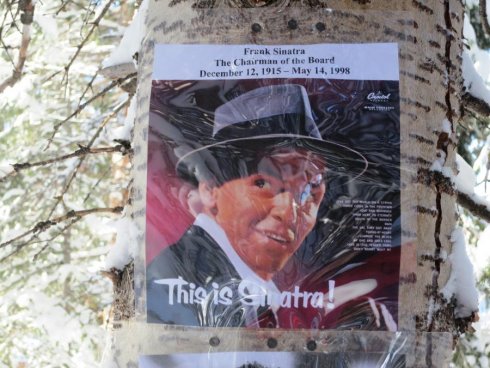 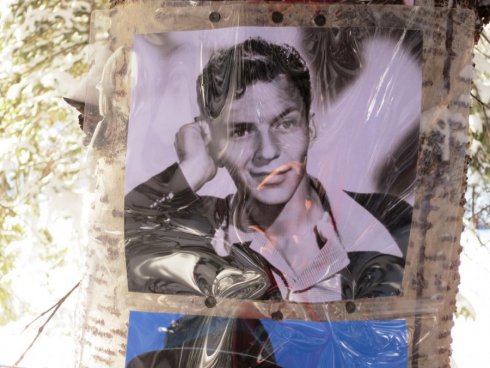 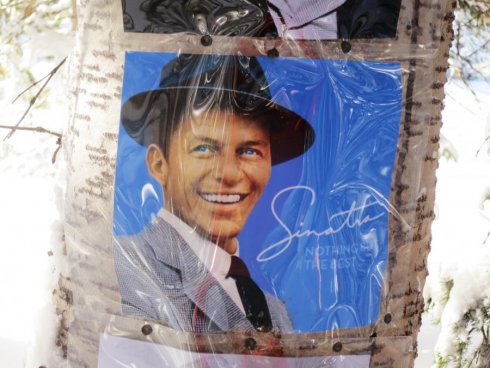 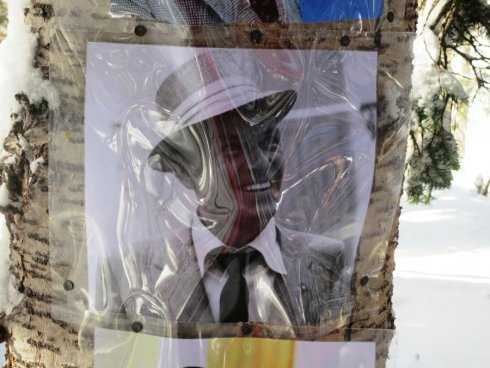 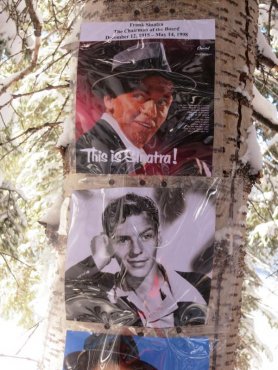 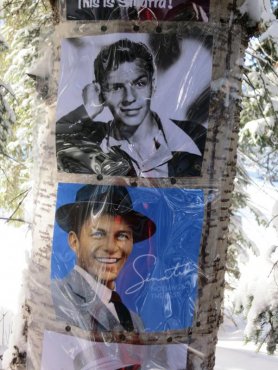 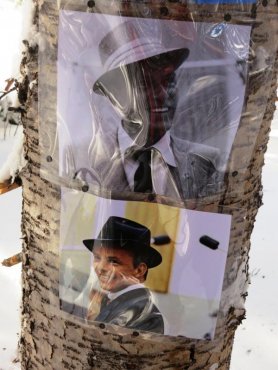 The photos in the section immediately below were taken during the 2018-2019 ski season.  All of the items in the Shrine seem to have been changed from what was there before. 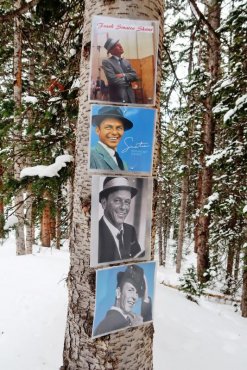 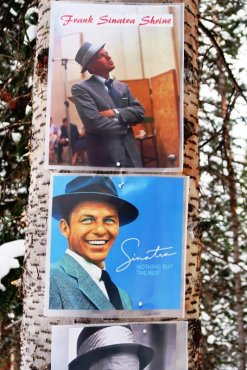 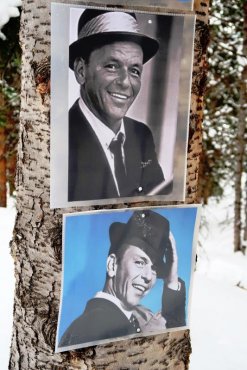 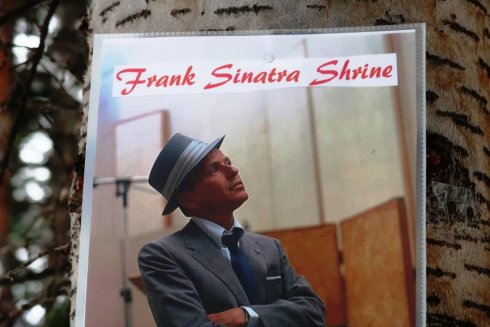 The photos in the section immediately below were taken during the 2020-2021 ski season. 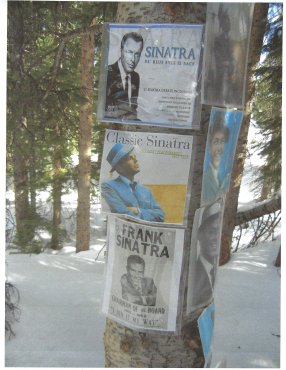 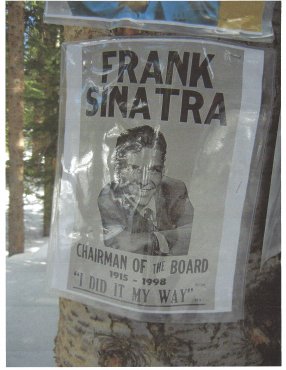 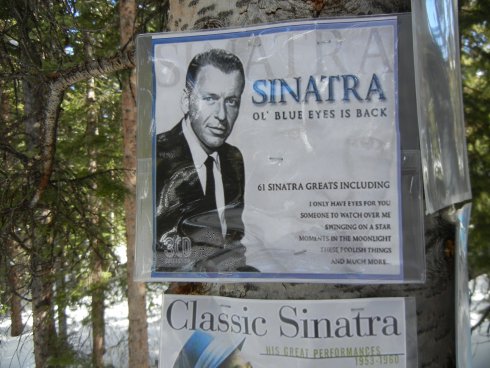 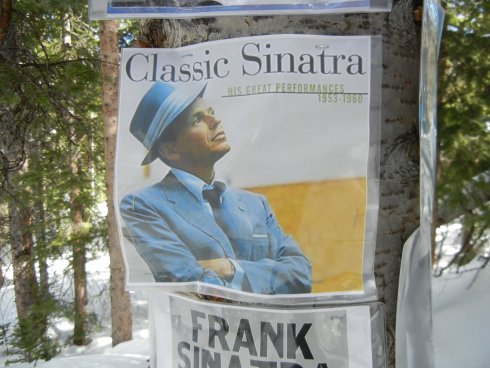