The Father Bill Brennan bench is located near the Mountain Chalet in Aspen.  He died on February 5, 2012.  Photos of the bench (taken in December of 2017) are below; click on images to enlarge.
See this page:  https://www.legacy.com/obituaries/heritage/obituary.aspx?n=william-brennan&pid=155778447&fhid=14327

BRENNAN FATHER WILLIAM Age 84. February 5, 2012. Beloved son of the late Claude and Mildred Brennan. Loving brother of Robert (Kathleen) Brennan and the late Pat (Mary) Brennan and Dorothy Morton. Cherished uncle of many nieces and nephews. Father Brennan will be remembered by the many lives he touched during his time as Pastor at these parishes, St. Christine, St. Luke, St. Boniface and St. Sebastian. He will be missed by the hundreds of Skiing Saints with whom he shared his love of skiing. Fr. Brennan held the rank of Major in United States Army. He served his country for 30 years as an Army Chaplain. Visitation at Hackett-Metcalf Funeral Home, 2640 Monroe Blvd. (near W. Outer Drive), Dearborn Tuesday 1:00 - 9:00 p.m. and Wednesday 1:00 - 9:00 p.m. with a Rosary at 7:00 p.m. In state Thursday 10:00 a.m. at St. Albert the Great Catholic Church, 4855 Parker St., Dearborn Heights, MI 48125 until the time of Mass at 11:00 a.m. In lieu of flowers memorial contributions may be made to Angela Hospice, 14100 Newburgh Rd., Livonia, Michigan 48154 or www.angelahospice.org

From The Detroit News and Detroit Free Press

"This one was a long inquiry," said Michigan Court of Appeals Judge Michael Talbot as Brennan's forced retirement was announced. Talbot is the head of Maida's board charged with combatting the abuse of children.

"We were trying to be very careful," Talbot said. Brennan, who led the south Dearborn Heights parish with a 400-student elementary school for 33 years, became the 18th priest in the Archdiocese of Detroit to be disciplined in the last year for sexual misconduct involving minors. He could not be reached for comment.

Talbot said church officials had two complaints from women who accused Brennan of sexually abusing them in the 1960s, but some of the details were sketchy and one woman recalled Brennan's first name incorrectly.

Brennan, 75, had been a priest for 50 years and no other claims had arisen against him, Talbot said, "so we owed great respect to the complainants, but we also owed it to a priest with 50 years of service to take great diligence in investigating."

"Yes, it was a risk leaving him there," Talbot said, "but it was a very, very small one."

David Clohessy, a national spokesman for victims of clergy abuse, called the long inquiry a "gross violation" of the rules agreed to by Catholic bishops last year. "They promised to move quickly," he said.

Nine months "seems an inordinate amount of time to leave him around children," said Clohessy, the St. Louis-based national director of Survivors' Network of those Abused by Priests.

Parishioners said Brennan had been a hard-working, committed pastor who made grandfather clocks that were auctioned every year to raise money for the school and who manned the fryers for annual Lenten fish fries. He often took parish teens, along with parent chaperones, on skiing trips to Aspen, Colo. He also spearheaded fund-raising for a new school gym, which is named for him.

"As a woman and a parent, I want what's right. I want justice to be served," said Socorro Truchan, a longtime parishioner who has three children at the school. "But all I have is the good that I know he's done from the years that I've lived here."

Truchan said Brennan said mass nearly every morning for the students. Her oldest son went on a ski trip Brennan led several years ago, she said.

"I've known him for 33 years, and I can say he served the parish well," said Larry Girard, 84, a church deacon.

Parishioners were stunned by the announcement, and that it fell on Ash Wednesday.

"This is a complete shocker, especially during this time of the year, when Lent's starting," said Jose Castillo. "He's a wonderful priest. . . . I don't believe it."

No one at the parish office or school would comment Wednesday about Brennan's removal.

Msgr. Walter Hurley, Maida's personal liaison with Talbot's committee, said the St. Sebastian staff was informed of Brennan's dismissal Tuesday, and a letter was being sent to parishioners.

The priest has not been charged with a crime because the accusations involve incidents beyond Michigan's statue of limitations nor is he the subject of a civil suit.

Nevertheless, one of the women who accused the priest said the news of his removal was a huge relief.

"I'm really happy to hear this," said the woman, who is not named because the Free Press generally does not identify victims of sexual abuse.

"I was 12 or 13 years old when it happened, and I'm 52 now, so this has been a long time in coming. I've lived with this for many years," she said. "It's like a giant weight lifting from my body. It's comforting to know that, after so many years, justice finally has been done, and he's gone."

Another woman told investigators that Brennan molested her during his first assignment at St. Lawrence Church in Utica in the 1950s, when he befriended her family.

"I'm glad justice has been done," she said.

Any original material on these pages is copyright © BishopAccountability.org 2004. Reproduce freely with attribution." 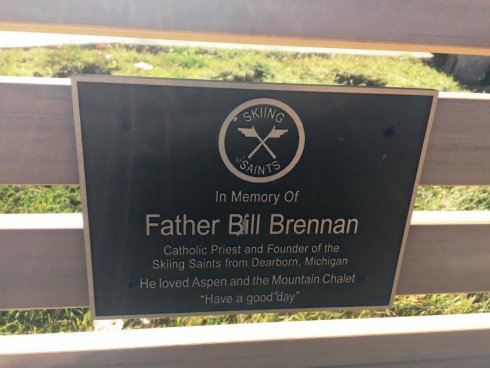