The Elk Mount--Gailen B. Smith (Buttermilk)

The Elk Mount is located at the Cliff House restaurant at Buttermilk.  It has a brass plaque on it, stating:

The information below on Gailen Smith was on the Aspen/Snowmass web site in the "Meet The Pros" section.

On May 26, 2008, Gailen B. Smith sent an e-mail message to the author supplying information about himself and the elk mount.  In this e-mail he stated that he had moved to the Roaring Fork Valley in 1980.  From 1985 to 2000 one of his activities was to outfit and act as a guide for rifle hunters who were hunting elk.  At the time, he leased a ranch near State Bridge on the way to Steamboat Springs.  During the last season he worked, he had a client who could not get his sights on a bull lurking in the woods, so Smith shot it himself.  Smith then took the elk to Slims Taxidermy in Glenwood Springs (7916 Highway 82) and had the elk head mounted in the “sneak position.”  At first, the elk mount was displayed in Smith’s home in Carbondale.  In 2005 Smith moved to a smaller place in Aspen, and there was no room for the elk mount in his new place of residence.  His nephew had the idea of donating the elk mount to the Aspen Skiing Company.  Smith thought that was a great idea and spoke with the Aspen Skiing Company management about it.  They agreed to accept the elk mount and suggested the Cliff House as a good place for it and it was installed there in 2006.  Smith stated, “It would be impossible to find another place where my Elk could be more at peace.  Someday I will be joining his spirit overlooking these beloved mountains.”

Smith also mentioned that he took up snowboarding at Buttermilk with his son in 1985, and stated:  “In 1992 I joined the Aspen Ski Company as a Snowboard Instructor.  It is with great pleasure that I have worked with the wonderful people at Buttermilk ever since.  I am so proud to be part of that extended family.”

Photos of the Elk Head and plate are below (photo credit to David Wood, Jr.) 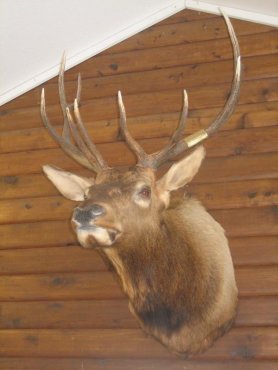 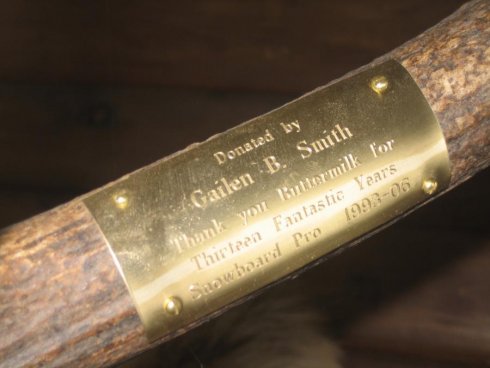