The Sarah Cain Mural, "Mountain Song," was in the Elk Camp restaurant on Snowmass.  It opened on November 23, 2017, and was replaced by a tapestry by Herbert Bayer at the beginning of the 2018-19 ski season.  It was the fourth offering in the Elk Camp restaurant of the Aspen Art Museum and the Aspen Skiing Company for their "Art in Unexpected Places" program.  It replaced a mural called "Resonant Tides" by Shinique Smith.  For more information, see this October 9, 2017 Aspen Times article:
http://www.aspentimes.com/news/sarah-cain-commissioned-for-elk-camp-mural-at-snowmass/

Los Angeles–based painter Sarah Cain will produce a large-scale, site-responsive installation at the Aspen Skiing Co.'s Elk Camp restaurant on the Snowmass Ski Area, to be unveiled Nov. 24 [actually, it was unveiled the day before, on November 23, 2017, ed.]

Cain creates playful, abstract installations with a bold use of color, improvisation and a variety of perspectives. Within her lyrical, energetic compositions, she incorporates found objects and recycled materials, transformed using the language of sculpture. The artist became known early in her career for seeking out opportunities to create expansive, temporary site-responsive works in such diverse and unexpected architectural spaces as a Masonic lodge, a parking lot, a hotel and an abandoned shopping mall, among other venues.  Cain's on-mountain artwork at Elk Camp will replace Shinique Smith's "Resonant Tides" and follow murals by Teresita Fernandez and Dave Muller at Elk Camp." 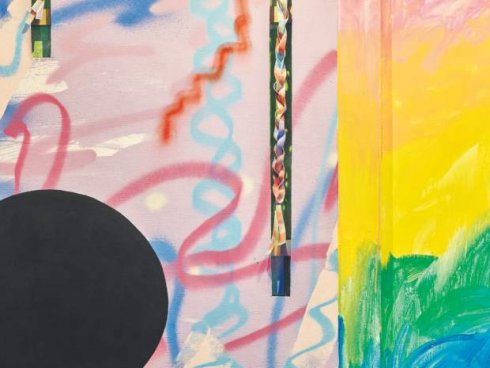 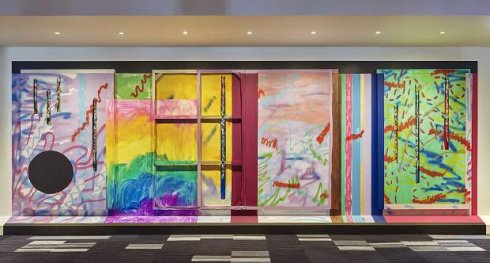 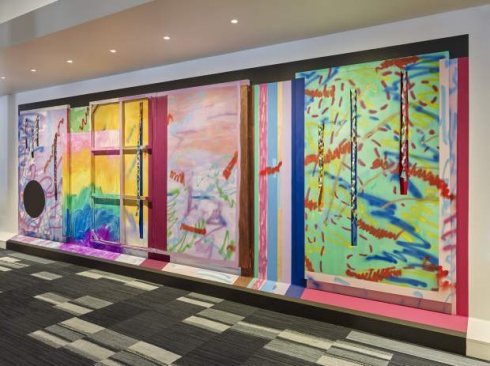 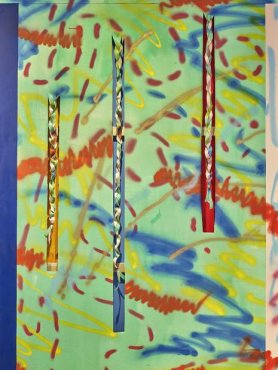 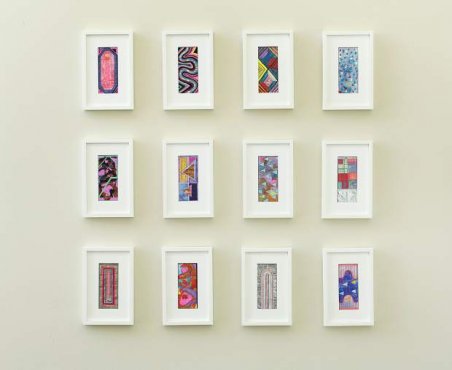 Along with the on-site mural (the 4 photos above), Cain hung 12 small paintings on dollar bills on a wall in the stairway beside "Mountain Song."

The photos in this section were taken by the author in early December 2017.  Click on images to enlarge. 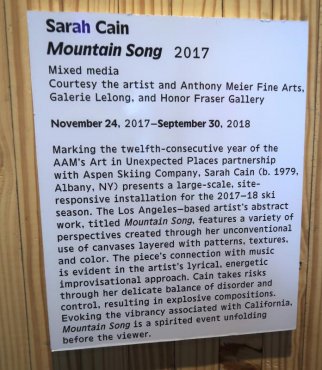 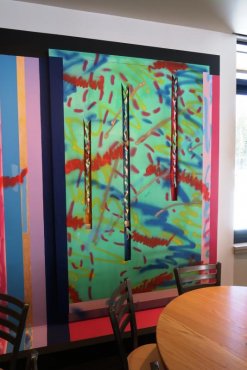 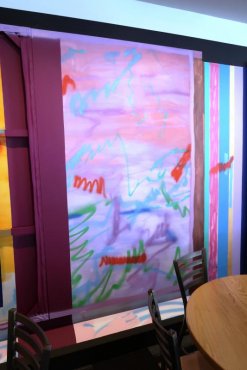 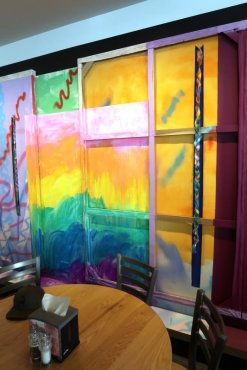 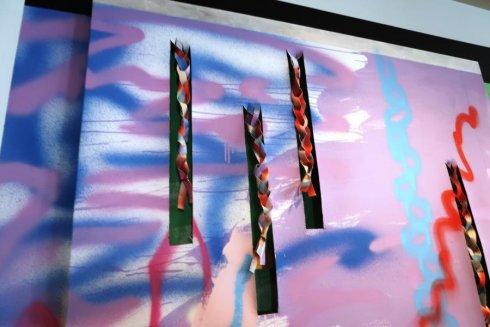 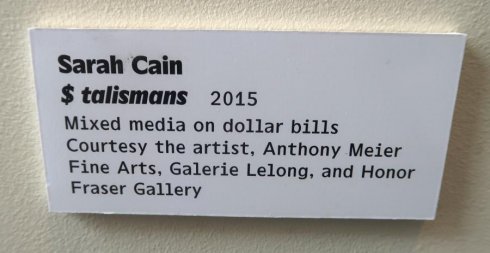 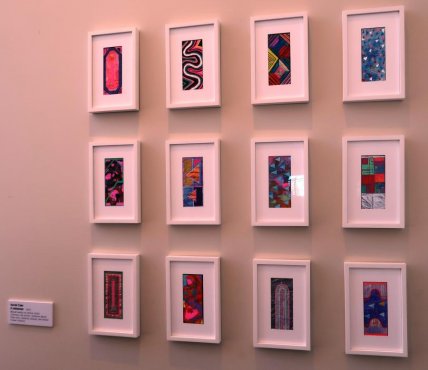 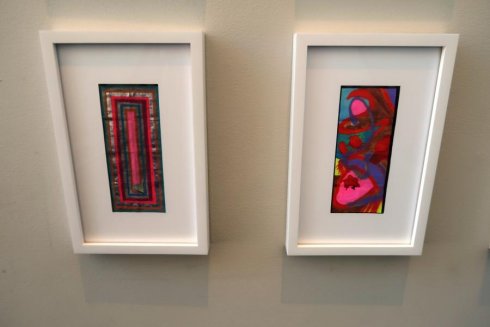 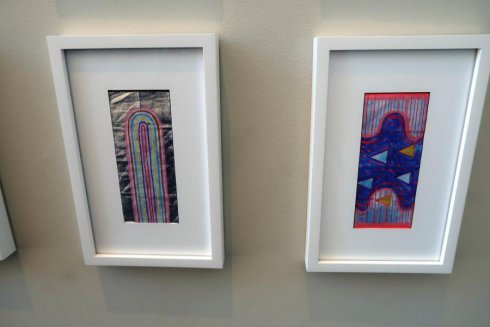 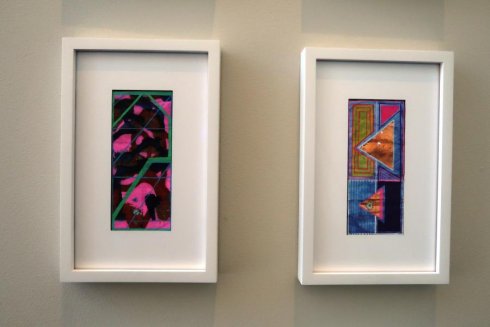 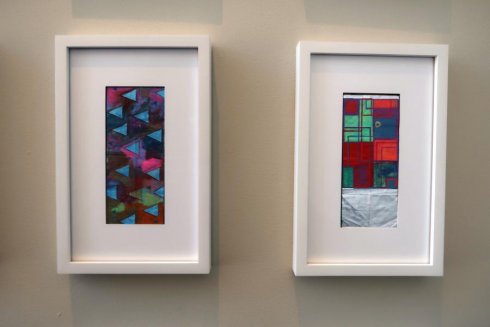 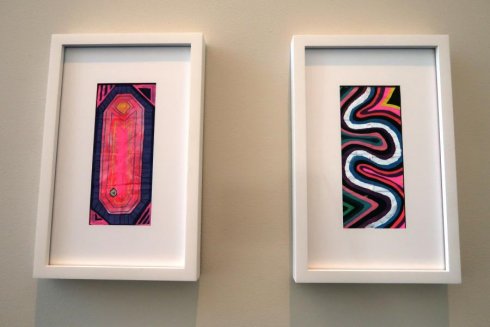 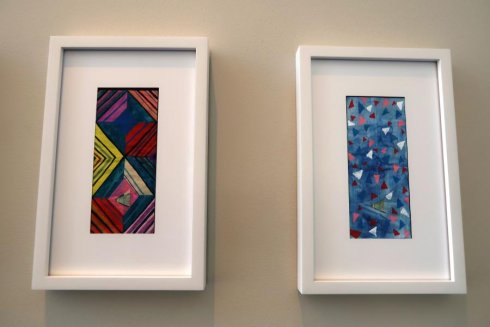