The "Resonant Tides" mural by Shinique Smith was a November/December 2015 (and the third) offering of the Aspen Art Museum and the Aspen Skiing Company for their "Art in Unexpected Places" program.  It was located inside the Elk Camp restaurant on Snowmass (and was replaced with a mural by Sarah Cain, the fourth in the series, in November 2017).  When it was unveiled in December 2015 it replaced a mural by Teresita Fernandez.  The author took photos of the Smith mural on December 5, 2015; one of the photos is below (click on it to enlarge it) and you can view the rest of the photos by clicking on this Facebook photo album (you do not need to have a Facebook account in order to view the album):  https://www.facebook.com/media/set/?set=a.954478951290736.1073742036.100001859201674&type=1&l=7c2b77f1ee

For more information about the mural and the artist, see this Aspen Times article:  http://www.aspentimes.com/news/19291934-113/aspen-times-weekly-mural-on-the-mountain

The other murals that have been in the Elk Camp restaurant: 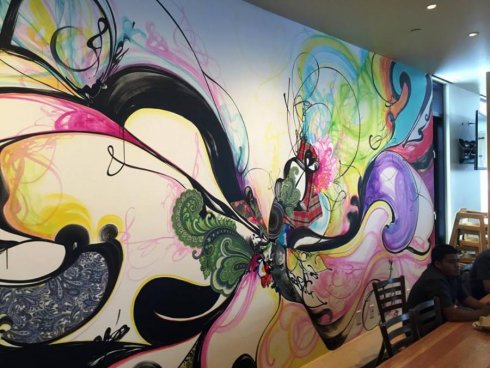