The Dick and Miggs Durrance Plaque and Chair (Aspen Mountain)

Richard Henry ("Dick") Durrance (October 14, 1914 – June 13, 2004) was a 17-time national championship skier and one of the first American skiers to compete successfully with European skiers. He was born in Tarpon Springs, Florida and moved with his family to Garmisch-Partenkirchen, Germany in 1928, where he learned to ski.  In Germany, Durrance skied competitively, winning the German Junior Alpine Championship in 1932 at age 17.  With the rise of Hitler the family returned to the United States.  He attended Dartmouth College in 1934 and won at Sestriere, Italy, the first American to dominate at a major European ski race.  Durrance also won the U.S. men's downhill, slalom and Alpine combined events in 1937 and was named to the U.S. Olympic Team for the 1936 Winter Olympics, finishing eighth in the slalom and 11th in the downhill events.  He was a three time winner of the Harriman Cup in Sun Valley and helped cut the original trails on Bald Mountain in the summer of 1939.  He was named to the 1940 Olympic team, but those games were cancelled due to World War II.  In 1940 he worked as publicity photographer for Sun Valley and married ski racer Margaret "Miggs" Jennings.  In 1941 the Durrances bought and operated the lodge and lifts at fledgling Alta in Utah.  After training paratroopers to ski for the U.S. Army at Alta, the Durrances were expecting their first child.  They moved to Seattle where Dick worked for Boeing on in-flight camera recording equipment as a Flight Test Engineer, a job that lasted until 1945.  The Durrances then moved to Denver to work for Thor Groswold, then the nation's premier ski maker, to design and test Groswold skis.  At the same time, Durrance contracted with Denver's Ernest Constam, inventor of the J-bar and the T-bar ski lifts, to sell his conveyances in the West.  Durrance sold his first T-bar to Aspen, a resort just then emerging as the first postwar ski area of note in the Rockies.  In 1947, Durrance was hired to manage the Aspen Ski Corporation.  The struggling company was turned around by Durrance, who brought the 1950 World Championships to Aspen. Hosting the Championships put Aspen on the map and Aspen is now one of the most popular ski resorts in the U.S.  Durrance also produced a number of ski films and devoted most of his life to the promotion of skiing.  Dick Durrance died on June 13, 2004 in Carbondale, Colorado of natural causes.  His wife Miggs died previously in November 2002.

See these articles from the Aspen Times newspaper about Dick and Miggs Durrance:

The Dick and Miggs Durrance plaque is attached to an old ski chair sitting in the snow near Ruthie’s Run on Aspen Mountain.  Photos of it are below.  The brass plaque reads as follows:

"In loving memory of

for whom this mountain and this town were a dream come true."

This plaque and chair are covered in the book, "Sanctuaries in the Snow--The Shrines and Memorials of Aspen/Snowmass."  The book may be purchased on this page on this site:  http://www.aspensnowmassshrines.com/index.php?The-Book 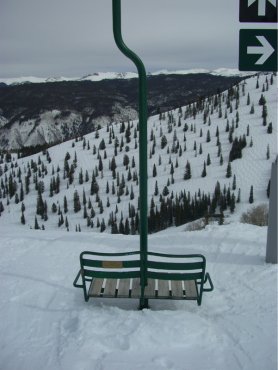 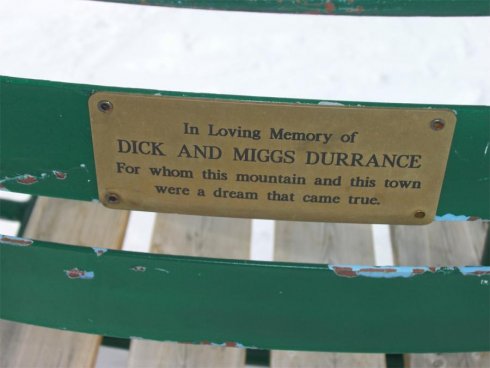