The Curtis Cleveland Bench is a wooden bench with the following carved in the back of the seat:

Here is the story of the Curtis Cleveland memorial service (the link to this no longer works):

Curtis Cleveland’s memorial was held at the top of Aspen Mountain April 5, 2000.  He would have been 69 April 18th.  His Memoriam in the program reads as follows:  Curtis Cleveland collapsed suddenly from a heart attack Thursday March 30, 2000, standing beside his wife Hattie on Aspen Mountain.  Curtis Dale Cleveland was the adopted son of Edwin C. Cleveland and Lillian Barnes Cleveland.  He served overseas as a Lieutenant in the Air Force for 5 years.  He was a teacher and headmaster of a number of schools in New England.  He also taught as a full-time ski instructor at Sugarbush and Mad River Glen, Vermont, before settling in Aspen in the late sixties.  Curtis has been an outstanding and well-loved instructor for the Ski School of Aspen. He was also known for his home building, and in later years became a computer consultant for the Aspen Skiing Company as well as for many others in the Roaring Fork Valley.  Curtis is survived by his wife Hattie M. Cleveland and his children David W. Cleveland, Mary Jane Anderson and Edwin “Chip” Cleveland as well as his grand children Spencer Cleveland and Marshall Cleveland, and his daughter-in-law Julie Cleveland.  We will miss his dry wit and friendship, and we will never forget his graceful form on the ski slopes.  As Curtis often said, “Remember, the mountain always wins.”  There were approximately 200 family and friends in attendance. The memorial service was conducted by two ministers who are the sister and brother-in-law of Hattie.  They also married Curtis and Hattie. They evoked personal experiences with Curtis and read from scriptures from the Bible. Hattie’s sister spoke of how her marriage to Curtis allowed her to be true to herself, and thus she flourished. Hattie asked her sister to tell us something that not very many people about Curtis, that Curtis was a strong believer in God and had read the Bible from cover to cover.  Others spoke of how Curtis and Hattie never let a day go by without speaking of their love for each other.  Hattie was Curtis’s 4th wife. He said to me on several occasions that he was so very proud of Hattie and this time he finally got it right!  People in attendance also spoke of Curtis’s love for skiing, ski racing, teaching and mentoring. They also reminded us of his generosity, wit and approachability.  Curtis didn’t speak much, but when he did, he sparked our attention. Curtis knew how to have fun, lived the way he wanted to, and died the way he wanted to, with his boots on.  Patty O’Brien"

An Aspen Daily News article of April 3, 2000 has more information on him; it is quoted below.

Longtime local ski instructor Curtis Dale Cleveland died Thursday after doing what he loved most: skiing.  He was 68.  "His life was skiing," said Cleveland's wife Hattie M. Cleveland. "So it's appropriate he collapsed while he was skiing."

Cleveland, of Missouri Heights, collapsed Thursday while skiing on Aspen Mountain. He passed away later that evening.

Hattie met Cleveland when she took a ski lesson from him on a vacation in Aspen. They fell in love and were married six years ago.  Cleveland was a longtime employee of the Aspen Skiing Co. He worked for SkiCo from 1969 to 1996. Beginning at Snowmass, Cleveland was a ski instructor until his retirement. He also did computer consulting for SkiCo.

"He was totally devoted to training and teaching and loved to race. He had a true passion for the mountains and the sport of skiing," wrote Lynn Phillips, Aspen Mountain Ski School reservationist, in a prepared statement.  "Everyone who knew him loved him. He will be missed by us all," Phillips said.

Cleveland was also a builder who designed log homes and a runner and racer in the Masters program.

He received his secondary education from Williston Academy in Northampton, Mass., graduated from Tufts College in 1951 and later received a master's degree in education from the University of Massachusetts at Amherst.

Before moving to Aspen, Cleveland was an air traffic controller in Germany during the Berlin Airlift. He worked for the U.S. Airforce between 1952 and 1957.  Other jobs included the Assistant Head Master position at Stowe Preparatory School in Stowe, Vt. from 1959 to 1960.  Cleveland also was the principal of Chelsea High School in Chelsea, Vt. He was both principal and a teacher at the Beaman Academy in Vermont. He taught at the Williston Academy in Northampton, Mass.

Cleveland was born on April 18, 1931, the adopted son of Ewin C. Cleveland and Lillian M. Barnes. Both are now deceased.

Cleveland is survived by wife Hattie M. Cleveland; children David Cleveland of Missouri Heights, Mary Jayne Anderson of Basalt and Edwin "Chip" Cleveland of Dunnellon, Fla.; grandchildren Spencer Cleveland and Marshall Cleveland; daughter-in-law Julie Cleveland.  A memorial service will be held Wednesday, April 5, at 3:30 p.m. on the deck of the Sundeck. SkiCo will provide lift tickets to anyone who needs them for the service.  A reception following the service will be held at the Wienerstube Restaurant. Everyone is encouraged to bring a dish of food.  Donations may be made to the Aspen Valley Ski Club for the Curtis Cleveland Memorial Fund at P.O. Box C-3, Aspen, CO., 81612.  Friends of Cleveland would like to place a memorial bench on Aspen Mountain. Any donations may be sent to longtime friend Judi Francis at 201 Heather Lane, Aspen, Colorado 81611.  Francis may be reached at 925-1055.

The Curtis Cleveland bench is located near the top of the Silver Queen Gondola on Aspen Mountain.  Photos of it are below.

If you have any photos of or information about this item that you would like to share for use on this page, please send to the author at  AspenShrines@aol.com. 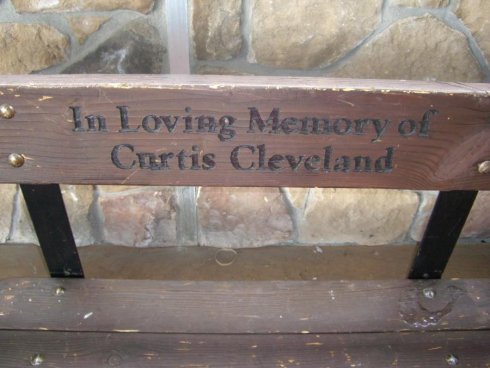 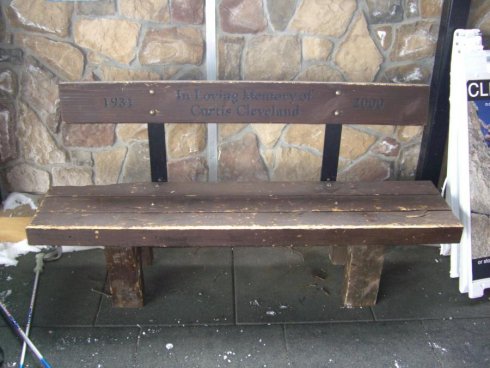