On March 5, 2009 Chris Polk, Buttermilk snowboard instructor, died after colliding with a tree on Buttermilk.

The shrine was created by Polk's fellow instructors using his own neckties.  It was created the very same day Polk died, which makes it unique among Aspen/Snowmass shrines.   Polk always wore a necktie under his snowboard instructor uniform as a mark of professionalism and for style points.

This "Tribute to Chris Polk" appeared in the Aspen Journal of March 7, 2009 (See:  http://aspenjournallive.blogspot.com/2009/03/buttermilk-pros-gathered-thursday-to.html

March 7, 2009
TRIBUTE TO CHRIS POLK
Ian Christopher is a snowboard instructor at Buttermilk and he sent an email saying he wanted to share a photograph (shown immediately below) from Thursday afternoon, the day his fellow instructor Chris Polk had a fatal collision with a tree on the Columbine trail at Buttermilk while snowboarding.  Just hours after the accident, Christopher said he and a group of fellow instructors collected many of the neckties that Polk used to wear under his snowboard instructor uniform as a mark of professionalism and for style points.  The instructors all placed ties in the branches of the small tree island just to the right of tower 11 on the Summit Express lift where the accident happened.  In the photo, Christopher is placing the last of the ties that afternoon while the rest of the Buttermilk crew sits in silence remembering their friend and co-worker.  It seemed an appropriate and very soulful gesture from a tight-knit crew who were no doubt shaken by the loss of a bright light in their midst."  Click on image to enlarge. 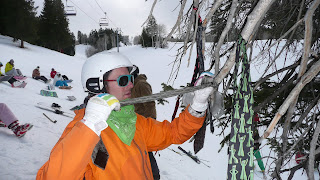 This obituary appeared in the 3/10/09 "Pilot News" of Plymouth, Indiana:
"Christopher B. Polk

The shrine consists of a number of Polk's neckties that his friends and associates tied to various branches of a pine tree.  It also contains a small wooden cross, and also a laminated copy of the poem, "Do not stand at my grave and weep," written by Mary Elizabeth Frye (1905-2004), a Baltimore housewife and florist (see:   http://en.wikipedia.org/wiki/Mary_Elizabeth_Frye).  The text of the poem is as follows:

Do not stand at my grave and weep;
I am not there. I do not sleep.
I am a thousand winds that blow.
I am the diamond glints on snow.
I am the sunlight on ripened grain.
I am the gentle autumn rain.
When you awaken in the morning's hush
I am the swift uplifting rush
Of quiet birds in circled flight.
I am the soft stars that shine at night.
Do not stand at my grave and cry;
I am not there. I did not die.
Snowboard Coordinator Mark Wilkinson issued the following statement the night of Polk's death:  “Chris absolutely lived for snowboarding.  His love for the sport was infectious and he was universally loved by everyone who worked with him.  He was an all around mountain guy and was always on the last lift up the mountain at the end of the day.  He will be dearly missed.”

See an article by David Wood in the March 14, 2012 issue of the Snowmass Sun newspaper, "Buttermilk shrines honor two longtime local ski instructors."  This article is set out in full below at the bottom of this page.

The Chris Polk Shrine is on Buttermilk.  Photos of it are below. 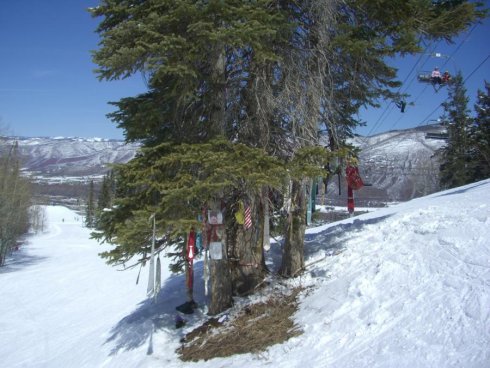 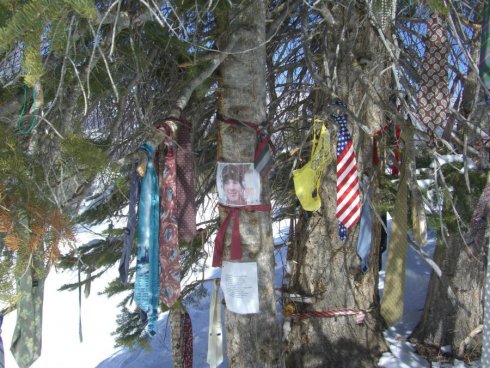 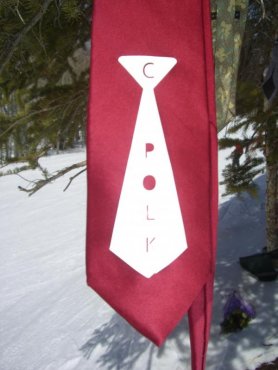 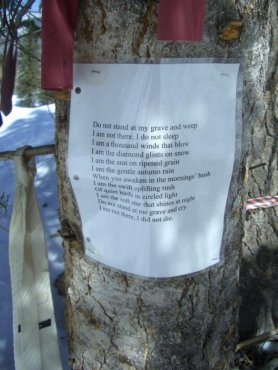 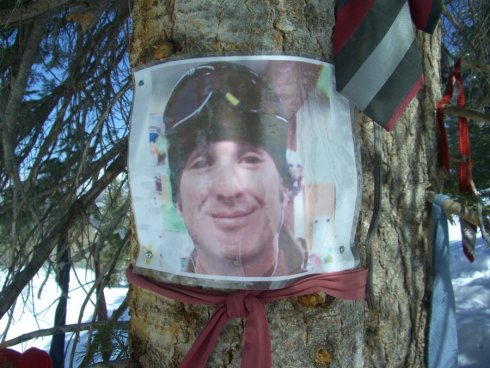 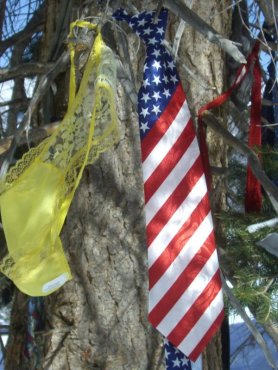 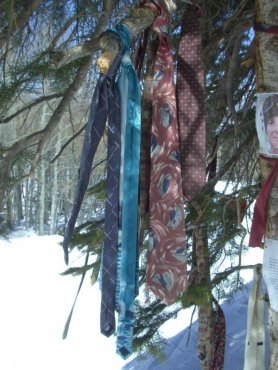 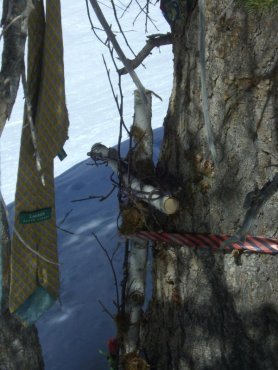 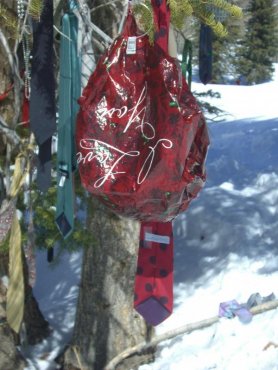 The photos below were taken in August 2010. 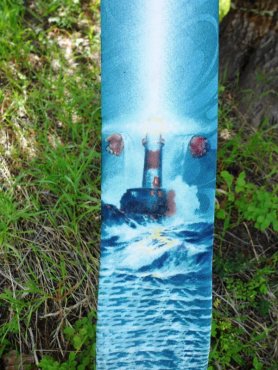 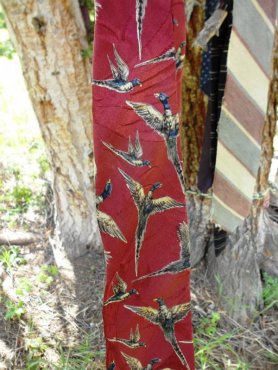 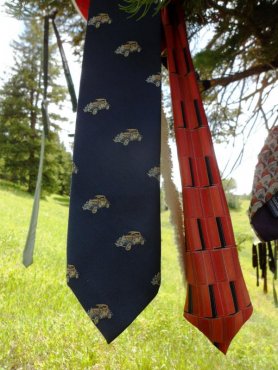 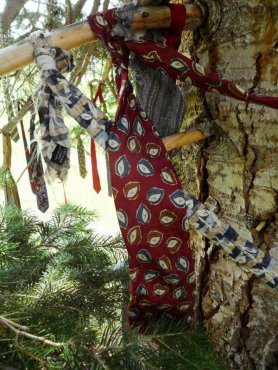 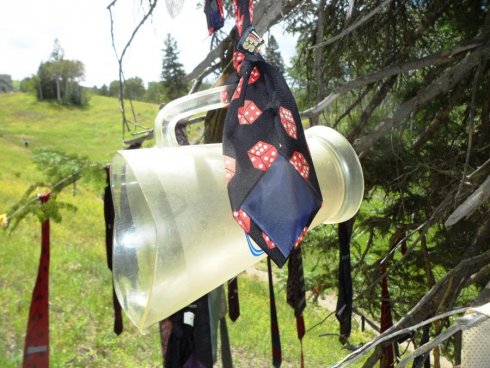 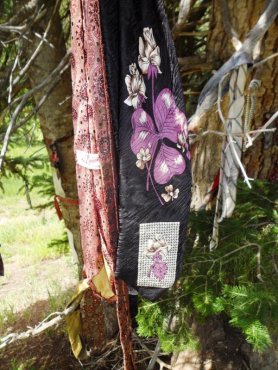 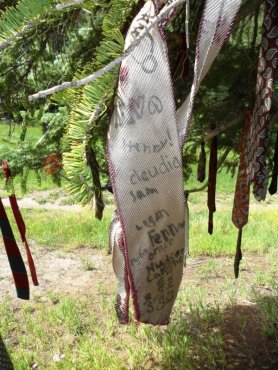 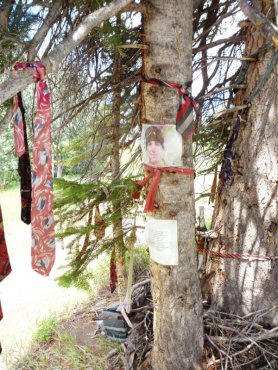 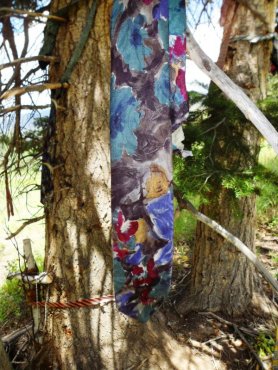 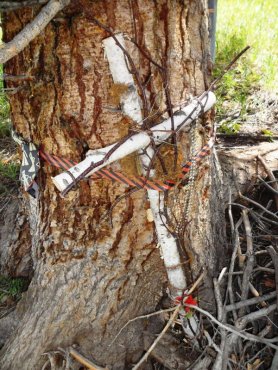 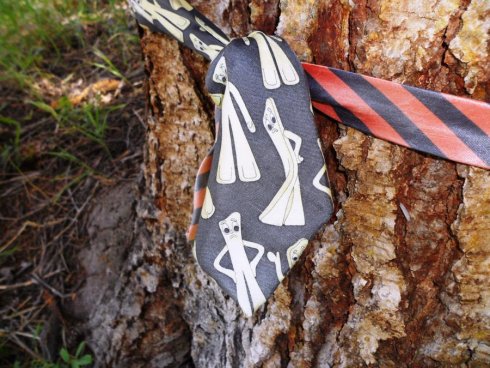 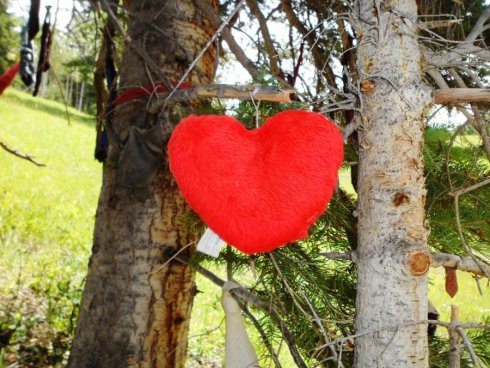 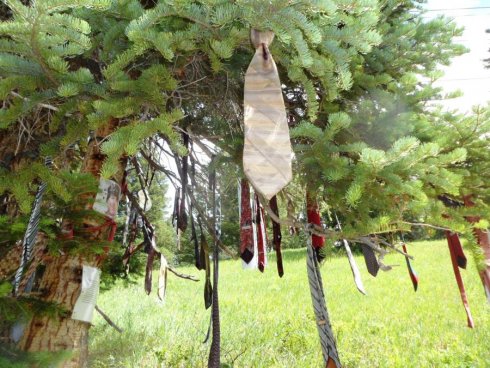 This is an article from the Aspen Times of March 5, 2009  by John Colson ("Snowboard instructor dies at Buttermilk"):

Polk, 30, was not wearing a helmet, said Skico spokes­man Jeff Hanle. He sustained multiple injuries, including blunt trauma to his head, chest and abdomen, according to Coroner Steve Ayers. An autopsy is scheduled.

The accident occurred shortly after noon; Polk reportedly was dead by the time ski patrollers arrived at the accident scene, though they administered CPR as he was transported down the mountain, Hanle said. Polk was taken via ambulance to Aspen Valley Hospital.

Hanle said the instructor, whom he described as a snowboard pro, had not worked that day but was snowboarding on the Columbine run at the time of the accident.

He said Polk “ended up in a kind of tree island, with just a few trees,” and was found in the middle of the grove. Hanle said the snowboarder “was going fast,” according to reports from witnesses.

A passenger on a nearby chairlift saw the accident and called for help, Hanle said. The Buttermilk ski patrol reported being called at 12:23 p.m.

Pitkin County Sheriff’s Deputy Jeff Lumsden, who responded to the call for an ambulance to take the snowboarder to the hospital, said it took roughly 15 minutes for a snowmobile, towing a rescue sled behind it, to bring Polk down the mountain.

A news reporter at the base area said friends and fellow Aspen Skiing Co. employees could be seen weeping and comforting one another in Bumps restaurant at Buttermilk.

Polk's death is said to have caused widespread grief in the company.

At about 12:30 p.m. on March 5, Polk hit a tree on the Columbine run on the lower half of the mountain. Polk, a U.S. Navy veteran from the first Gulf War, was not working at the time.

Skico spokesman Jeff Hanle said records indicate “there was a fatality at West Buttermilk in the early ’80s. The year is undetermined at this point.” Since then, there has been no loss of life at Buttermilk, considered to be the most gentle of the four area mountains.

Polk is the second Skico employee this season to lose his life on the slopes. In December, Snowmass ski area snowmaker Tim Riley struck a tree while driving a snowmobile in the mountain darkness. Unlike Polk, who was not on duty, Riley, 19, had just started the third shift of snowmaking.

A Skico employee who did not want to be identified described conditions at Buttermilk Thursday as “super fast,” likely due to the cold front that moved in following a week of spring-like condition.

Jeff Hanle said Thursday’s accident was witnessed by a passenger on the lift who immediately called patrol. Polk, a third year snowboard pro, was listed as unresponsive when patrol arrived and began administering CPR and other life-saving measures. Those measures were continued as the victim was transported to a waiting ambulance and taken to Aspen Valley Hospital. He was not wearing a helmet at the time.

Buttermilk Snowboard Coordinator Mark Wilkinson issued the following statement Thursday night: “Chris absolutely lived for snowboarding. His love for the sport was infectious and he was universally loved by everyone who worked with him. He was an all around mountain guy and was always on the last lift up the mountain at the end of the day. He will be dearly missed.”

Grief counselors were expected on site Friday at Buttermilk to meet with staffers and Polk’s co-workers.

Below is the article by David Wood about the Chris Polk Shrine that appeared in the Snowmass Sun newspaper.

Buttermilk has the fewest shrines of any of the four mountains of Aspen/Snowmass, but that doesn't mean it's lacking in quality shrines. Two outstanding shrines are at Buttermilk and are dedicated to deceased ski/snowboard instructors.

The Shrine for Chris Polk

On March 5, 2009, Chris Polk, Buttermilk snowboard instructor, died after colliding with a tree on the Columbine trail at Buttermilk. He was 30 years old.

His death was the first on-mountain fatality at Buttermilk ski area in more than 25 years. Polk always wore a necktie under his snowboard instructor uniform “as a mark of professionalism and for style points” according to a tribute that appeared in the Aspen Journal.

His shrine was created by his fellow instructors using his own neckties. These instructors all placed ties in the branches of the small tree island just to the right of tower 11 on the Summit Express lift where the accident happened. The shrine was created the very same day Polk died, which makes it unique among Aspen/Snowmass shrines.

Polk was born and raised in San Jose, Calif. He enlisted in the Navy after high school and served in Operation Desert Shield. He had a passion for snowboarding that led him into teaching. He taught in Yosemite, Calif. ,and then at Buttermilk. In addition to Polk's ties, his shrine also contains a small wooden cross, a photo of him, and a laminated copy of the poem, “Do not stand at my grave and weep,” written by Mary Elizabeth Frye.

The Shrine for Señor Kess

Another Buttermilk shrine dedicated to a deceased instructor is a shrine for Robert D. Kesselring, who died on Sept. 14, 2003, after having battled prostate cancer for 10 years. He was 65 years old at the time of his death.

Kesselring's nickname was “Señor Kess,” and in his shrine is a life-size model dressed up in a ski instructor's uniform, mounted on a platform in the trees near Fort Frog at Buttermilk.

He came to Aspen in November 1963, where he spent the remainder of his life. He had a passion for skiing and spent 40 years as a ski instructor with the Aspen Skiing Co. at Buttermilk.

He could be heard around the locker room saying things like “one month to St. Patrick's Day,” “two weeks to Hump Day,” “only 67 days until Cinco de Mayo,” and “no mas mosquitoes Day,” to name a few of his sayings.

He had a facility for learning languages, and was fluent in Spanish and Portuguese, both of which he used as a ski instructor. 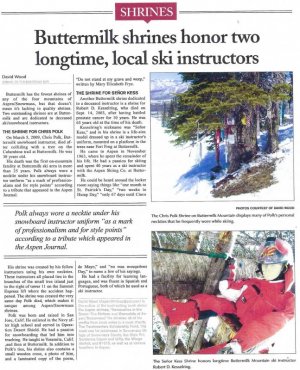