Carl "Chip" W. Johnson, died the afternoon of Tuesday January 25, 2000, when he was caught in an avalanche while backcountry skiing on the backside of Aspen Mountain, outside ski area boundaries.  Johnson, 37, of Snowmass Village, had been skiing alone in a narrow gully in Hurricane Gulch when a 120 by 150 foot avalanche swept him away at about 5 p.m., the Pitkin County Sheriff's Office said. His body was recovered from beneath 6 feet of snow and resuscitation efforts were unsuccessful, the sheriff's office said.  (By Andrew Stiny/Aspen Daily News Staff Writer)

Friends and co-workers Wednesday mourned the death of Carl "Chip" W. Johnson, who died Tuesday afternoon when he was caught in an avalanche while backcountry skiing on the backside of Aspen Mountain, outside ski area boundaries.  Johnson, 37, of Snowmass Village, had been skiing alone in a narrow gully in Hurricane Gulch when a 120 by 150 foot avalanche swept him away at about 5 p.m., the Pitkin County Sheriff's Office said. His body was recovered from beneath 6 feet of snow and resuscitation efforts were unsuccessful, the sheriff's office said....Many of Johnson's co-workers at Aspen Sports in the Snowmass Village Mall were in shock Wednesday.  "Everyone is pretty much taking the day off, it's been really rough," Natalie Wayman said. "Everyone was really close to him, we are all in shock."  Barry Farr echoed Wayman's sentiments.  "We are all definitely taking it really hard. He was a fantastic guy," Farr said. "He was extremely popular up here in the village -- everybody knew him."  Aspen Sports Manager Keith Long had worked with Johnson for 15 years.  "He was an unofficial ambassador here, everybody knew him in the mall," Long said. "He was a great guy, he was everybody's friend, he helped everybody."  Long described his friend and co-worker as an experienced backcountry, downhill and telemark skier and he attributed the accident to the "wrong time, wrong place."  Although Johnson was skiing alone at the time of the avalanche, he had been skiing with friends earlier Tuesday, Long said. "He was doing some backcountry skiing with some friends and decided to take a last run...."  A rescue effort was launched for Johnson after he failed to meet his girlfriend in a parking area near Lower Hurricane Road as previously arranged, the sheriff's office said. Johnson's girlfriend lives near the accident area and "she knew which house to go to for help," Pitkin County Sheriff's Deputy Scott Thompson said.  According to Thompson, the girlfriend, who is not being identified, summoned help from four local residents including Annie Bollinger and Dan Bunta.  Bunta was taken to the top of the slide area by snowmobile and "he skied down into it just following the tracks," Thompson said. "He found the tracks going in ... but there were no tracks going out and then he screamed down for help."  Bunta and the others started searching for Johnson with avalanche probes. The residents, 10 Mountain Rescue Aspen volunteers and an avalanche rescue dog recovered the body.

This bench is located on the Snowmass Mall near Aspen Sports, where he worked.  Carved on the back of the bench is this:

"In memory of our good friend Chip Johnson."

Damian Smith wrote and recorded a song about Chip ("Raise Up Your Glass--Song For Chipster"); watch the video here: https://www.youtube.com/watch?v=leTHdEhDI5w   Thanks very much to Franz Zedlacher for telling the author about this song.

See this Denver Post article ("Avalanche fatalities up this winter") of April 28, 2000, which contains this quote: Carl "Chip" Johnson, a 37-year-old expert backcountry skier who died Jan. 25 when he triggered an avalanche while skiing in a steep gully near Aspen, in what searchers considered a classic "terrain trap." http://extras.denverpost.com/news/news0428a.htm

The ‘Chipster’ would be pleased, March 18, 2004, The Aspen Times.
The family of Chip Johnson wish to take this opportunity to thank the Cirque Cafe and its crew for hosting what now seems to have become the annual “Chipster Day” event.  We would also like to thank Damien, Michael and John of Take The Wheel for the great music they provided. And a very special thank you to Bob Benzil and Chuck Prentiss for putting it all together. We also wish to thank all of the many, many friends of Chip’s who attended. It means a great deal to us to know that he is not forgotten by the ones he held dear.  We hope that in the future, Chipster Day will become an annual event for generations to come.

Carl, Donna and Kirk Johnson and Buril and Kim (Johnson) Smith and family.

A photo of the bench is below.

(See section below for information on another bench dedicated to Chip Johnson that is located in Aspen (not on the mountain, but in town). 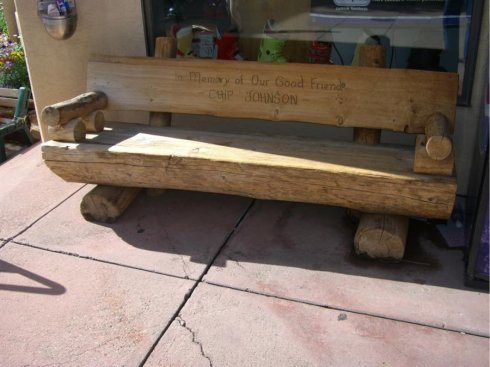 There is another bench dedicated to Chip Johnson that is located in Aspen (not on the mountain, but in town).  A photo of this bench is below; you can enlarge it by clicking on it. 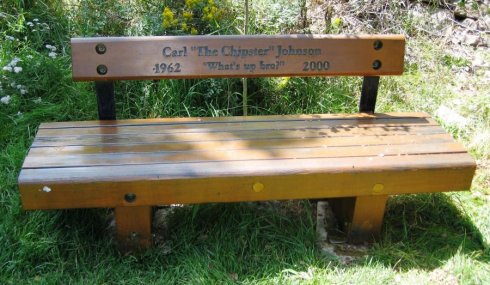