The Brad McFadden plaque is on the wall at Bonnie’s on Aspen Mountain.  A photo of the plaque is below.  Thank you to Mary Beth Reckinger Weaver for her help with the information on this page.

A Denver man died Saturday afternoon after skiing into a tree on Aspen Mountain.

Brad McFadden, 61, was apparently skiing on International, a black-diamond run on the west side of the ski area, when he veered "into the top area of S-1, the uppermost dump right after Bear Paw," said Jeff Hanle, spokesman for the Aspen Skiing Co.

The top of S-1 is one of the steepest pitches on Aspen Mountain. It is between the Bear Paw glades and Short Snort in the Mine Dumps area. The entrance to the narrow run is at the bottom of International, where a catwalk swings most skiers back left toward Ruthie's Run.

If a skier were to come down International with speed and miss the catwalk, they could very quickly find themselves over the edge and plunging down S-1. The top of the run is normally very rocky and is lined with aspen trees.

Ski patrollers arrived at the accident scene around 1:42 p.m. and found McFadden about 100 to 150 feet down S-1 against a small aspen tree. He was unconscious, without a pulse and not breathing.

Resuscitation efforts lasted until 2:50 p.m. when, after multiple radio and phone consultations with a doctor at Aspen Valley Hospital, the victim was pronounced dead.

Friends skiing with McFadden told mountain patrollers and emergency responders that he was an experienced skier. He was wearing a helmet at the time of the accident. However, the victim experienced severe trauma to his torso in the accident, said Pitkin County Sheriff's Deputy George Kremer.

"There was a lot of trauma on the body," he said. "It was probably traumatic arrest, but until an autopsy is done, we won't know if the trauma is incidental to his death."

The accident was the first ski-related death in Aspen this season, but was the fifth death on Colorado's slopes so far this season. Two other skiers have died on state ski areas due to health problems.

The Atlanta Journal-Constitution, In Memoriam January 17, 2003

McFADDEN Bradford McFadden, Jr., a resident of Roswell, GA, Manteo, NC, and Punta Gorda, FL, died January 11, 2003 in a skiing accident on Aspen Mountain, Aspen Colorado. He was skiing with friends in the early afternoon when he apparently lost control and went over the edge of an extreme drop-off, dying upon impact approximately one hundred feet below. McFadden, age 62, was born in Atlanta August 9,1940, the son of Bradford McFadden, Sr. and Sarah Davis McFadden. He graduated from Northside High School in 1959 and earned a BAA degree from the University of Georgia in 1963. He went on to earn a Master's Degree in banking and finance at LSU and a degree from the Harvard Business School's Owners Presidents Management Program. In 1998 he endowed the McFadden Chair for Entrepreneurial Studies at UGA. He also participated as a guest lecturer on personal finance at the school.
He was the owner of McFadden Business Publications, a company started by his grandfather in Atlanta but greatly expanded by Bradford McFadden in the 1970s and 1980s. Its principal publication was the American Bank Directory, a standard desktop reference for bank officers throughout the United States. In 1992 he sold McFadden Business Publications, but maintained an active business career as an investment manager and developer of Old Roswell Lakes office campus. He leaves Old Roswell Lakes in the capable hands of his only child, Ashley Prudames.
Known to his friends as "Brad", he was a sailing, skiing, and flying enthusiast. A member of the Atlanta Yacht Club since 1964, Brad was the club's champion sailor ten times and held the position of commodore and treasurer. He served as a volunteer for the sailing venue of the Olympic Games in 1996, where he drove a media boat for Reuters News Service. He started skiing in 1970, first at Sky Valley and other southeastern resorts, and then out west in the Rockies. By 1975, he found a lodge in Aspen, the Holland House Ski Lodge that he liked so much he returned every year in December and January to ski with friends who also returned every year to the same place at the same times. This was a sport and a place where Brad found great happiness and fulfillment. He died in the presence of some of these friends, doing what he loved to do in the winter.
His remains will be flown back to Atlanta, and a memorial service is planned for Saturday, January 18, 2003 at ten o'clock in the morning at Church of The Atonement in Atlanta, GA, with a reception following immediately at the church. In lieu of flowers, please make donations to the American Heart Association or the Arthritis Foundation of Atlanta.
Bradford McFadden is survived by his wife, Martha Boyd McFadden, daughter, Ashley McFadden Prudames of Roswell, stepchildren, Frances Munson Turner of Richmond, Katharine Munson Sharp of Golden, John Munson of Richmond, three grandchildren, Emily Sharp, Jon Sharp and Katie Turner, as well as his sister, Nancy Tilly of Chapel Hill, and brother, Haynes McFadden of Omaruru, Namibia. 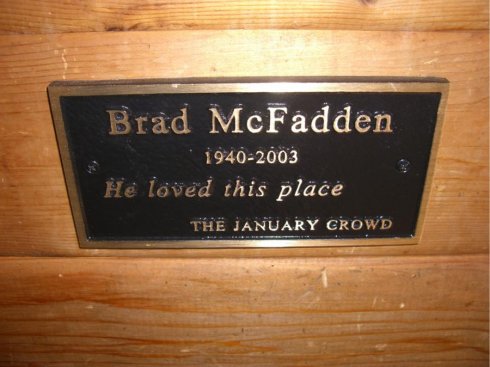