Boot Hill is a memorial to a member of the Aspen Highlands Trail Crew, named "Steve" who was injured in August 2005 while he was using a chain saw to cut runs under the new Deep Temerity ski lift at Aspen Highlands.  The story is told in a blog by "Bridget."  See:  http://mountain-musings.blogspot.com/2008/02/boot-hill.html.  This blog story is quoted below, and the photo below is also from the blog.  The blog does not identify the person in this photo.  The memorial was built by one of Steve's co-workers and consists of a bench with the chain from the offending chain saw embedded in it.  This is the story as told on the above-mentioned blog:

"In August of 2005, Steve was working on Aspen Highlands Trail Crew. That summer a huge project was ongoing to put in a new lift, the Deep Temerity lift. The lift was going to open up a slew of new territory below the Grand Traverse and one of the many tasks of the trail crew was to cut these new runs.  This means taking chain saws into fantastically steep terrain and felling and cutting up very large trees.  Steve was doing so one day when the chain saw he was operating hit a knot and kicked back on him. Since he was cutting a particularly large log, he had an extra long blade on the chain saw so when it kicked back, instead of clearing his foot as it would have if he was running the regular blade, it caught his left foot right in the instep. He had heavy duty work boots on but still, we're talking a chain saw here.  He radio'd his co-workers and then proceeded to self-evacuate by hiking up a little less than 1000 feet to the work truck.  After a full recovery, with a couple of hiccups, one of Steve's co-workers created a shrine to Steve's injury, Boot Hill, and on Saturday, Steve took me to it. It's a little more than half way down G.L.E. (Greatest Line Ever) and consists of a bench with the offending chain embedded in it. Due to the unbelievable amounts of snow this winter, the chain was snow-covered but that didn't stop us from taking pictures. Steve also saved the bloody boot (yuck!) and he's going to add that to the shrine if I remind him to take it in.  I'll be glad to get it out of my shed."

Boot Hill is located in the Highlands Bowl at Aspen Highlands.  One photo of it is below. 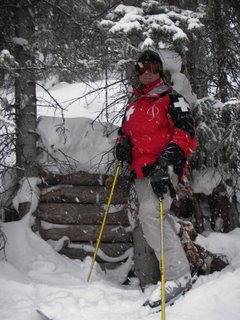