The Blondie’s Cabin and The Ski Museum (Aspen Mountain)

There is a story that "Blondie" was a madam/“soiled dove” who "entertained" in this cabin, which was located in Tourtellotte Park, back in the silver mining days, before long-time locals Betty and Art Pfister saved it and had it moved to its present location, not far from the "Blondie's" ski run on Aspen Mountain.  (There is another story of how the cabin got it's name, but it won't be repeated here.)  Inside the cabin is a desk and chair and also a pot-bellied stove. Also there are pictures on the walls and a narrow bench that doubles for a bed. (Some people also refer to this cabin as the "Pfister Cabin.")
This quote is from an ASPEN PEAK article by Greg Fitzsimmons:  "Blondie’s, which cascades to the right of Silver Bell, celebrates a late-19th-century, golden-locked lady of leisure who used to entertain lonely miners. Longtime locals Betty and Art Pfister eventually moved the one-room crib where Blondie conducted business onto Aspen Mountain, and Blondie’s Cabin, which sits at the bottom of the aforementioned run, still has the infamous bench that doubled as her bed. Myriad memorable moments have taken place on- and off-piste in Aspen, but only a select few are canonized for posterity on the Aspen Mountain trail map."
Also see this Aspen Times article by Kimberly Nicoletti, https://www.aspentimes.com/news/calling-all-seekers-find-your-shrine-on-ajax/ which mentions the cabin: "A small cabin tucked in trees above the Nastar shack holds a few secrets of its own; a soiled dove named Blondie used to entertain in the original cabin, long before longtime locals Betty and Art Pfister moved it up to Ajax. Though its locked, looking into one of the curtained windows reveals a desk and chair, a potbelly stove and a bench that doubles as a narrow bed. Nearby, a 60- to 80-foot fence made up of old skis including classic Millers, which floated on powder before manufacturers invented fat skis is a flashback to the straight and skinny years."

Next to Blondie’s Cabin is the Ski Museum (a museum of skis), which is a long fence (approximately 75 feet long) made out of old straight and skinny skis (including some classic Miller’s.)  These skis were moved to this location by Blondie's Cabin in 2004.  Prior to that time the the Ski Museum was located in an area in the trees near the top of the Gent's Ridge lift, and sometimes known as the "Ski Graveyard."  In 1997 the Aspen Ski Patrol started the tradition of leaving old skis in the trees up in this area.  Then other people started leaving old skis there too until over 100 pairs had accumulated.  In 2004 the Aspen Mountain Manager, Steve Sewell, decided to clean up the mess and move all the skis down to Blondie's Cabin and locate the Ski Museum there.  See article in the Aspen Daily News of May 27, 2004, "Abandoned Skis Get New Resting Place."  https://www.aspendailynews.com/abandoned-skis-get-new-resting-place/article_e36156fb-ea60-5601-a1c6-0008c730980b.html

Blondie’s Cabin is on one end of the Ski Museum and there is an outhouse on the other end.

For a panoramic/360 degree photo of the Ski Museum see the following link.  This photo was taken in 2005 and also shows the outhouse on the downhill side of the Ski Museum.  See:  http://www.aspenportrait.com/jerry-garcia-shrine/ski-wall.html

See below for two photos taken near the Ski Museum in the summer, showing a large number of old skis laying on the ground near the end of the Ski Museum.

Blondie's Cabin and the Ski Museum are located near the Silver Bell run on Aspen Mountain.  Photos of it are below.

The Ski Museum is covered in the book, "Sanctuaries in the Snow--The Shrines and Memorials of Aspen/Snowmass."  The book may be purchased on this page on this site:  http://www.aspensnowmassshrines.com/index.php?The-Book

(There is also a wall made of skis near the Silver Rush run on Aspen Mountain.  See the page on this site which covers it:   http://www.aspensnowmassshrines.com/index.php?68-The-Ski-Wall-Aspen-Mountain) 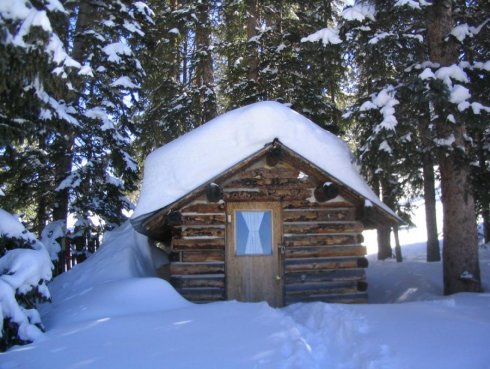 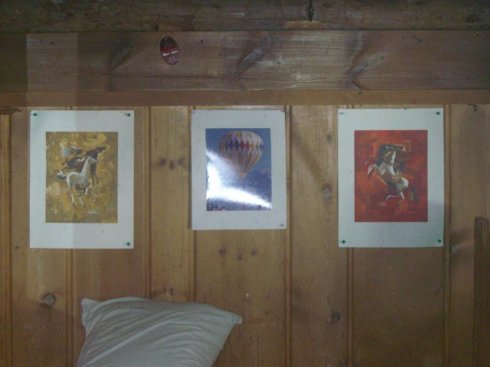 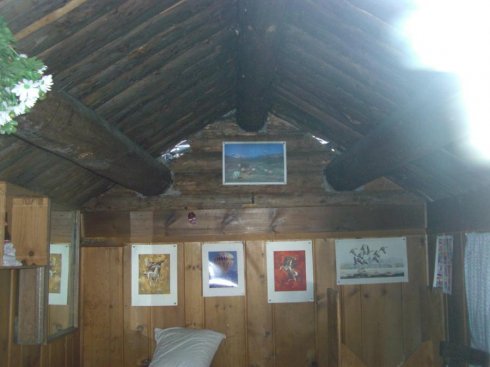 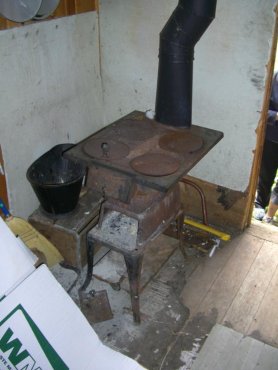 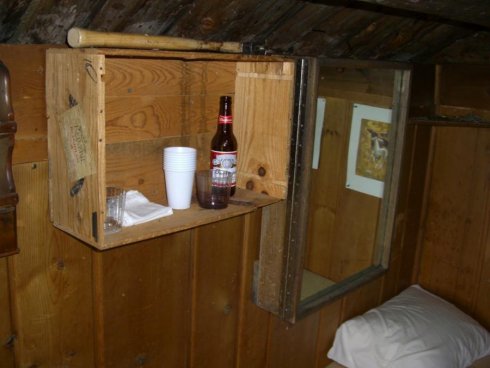 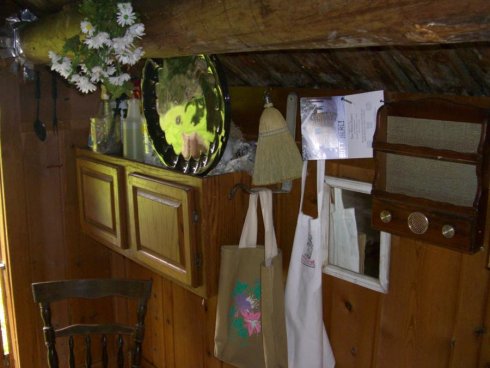 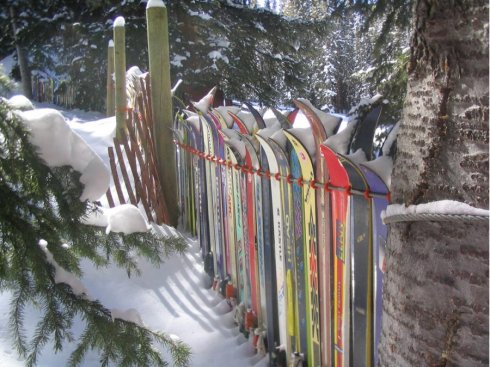 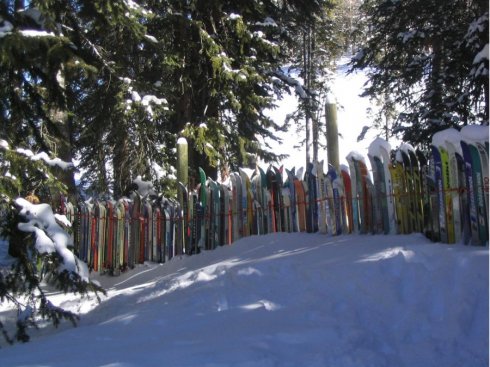 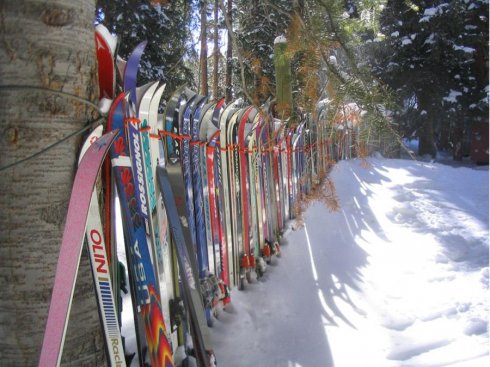 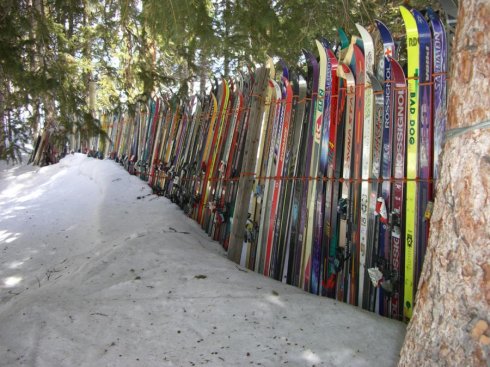 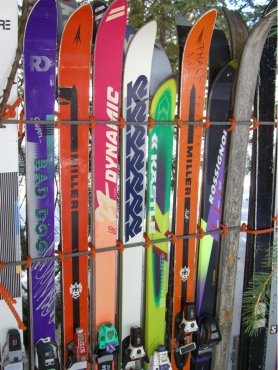 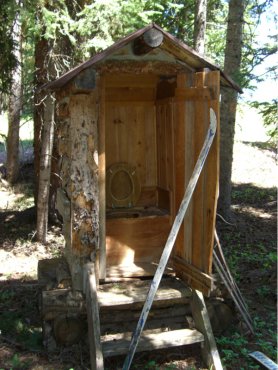 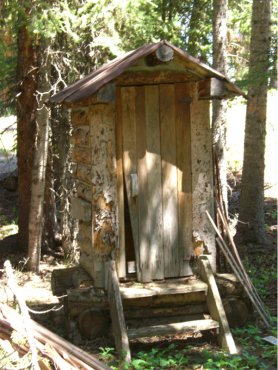 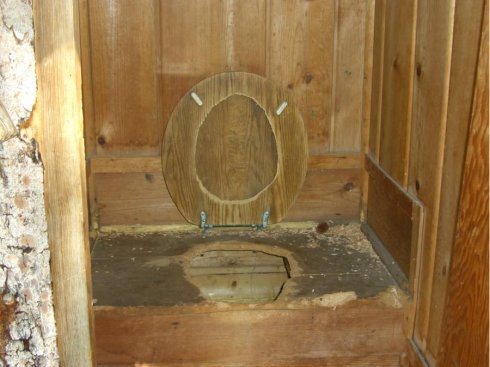 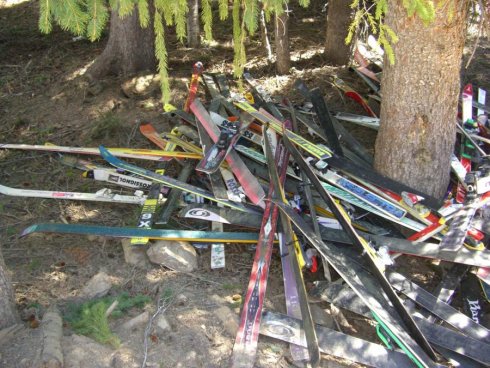 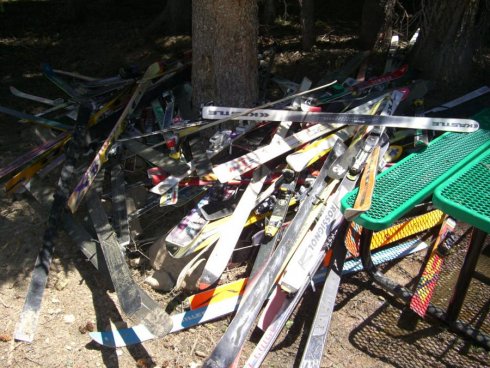