In the summer of 2008, the old Sheer Bliss two-chair lift at Snowmass (which originally was called the "Couloir Lift") was replaced with a new Sheer Bliss high-speed quad lift.  The new lift was realigned and lenghened.

A sculpture was erected at the bottom of the new Sheer Bliss lift.  A sign by the sculpture read as follows:

Blissful Helix is a sculpture created at Anderson Ranch Arts Center by Bland Hoke.  Over 2000 feet of old haul rope from the original Sheer Bliss Chairlift was repurposed and woven into the artwork.  For more information on 'Blissful Helix' and more of Bland's work visit:  www.blandhoke.com

Sometime before November 2011 the sculpture was moved to a location near the bottom of the Coney Glade lift and a "For Sale" sign was added.  See below for more information on this and photos.

The following information about Bland Hoke was found on his web site:  "About Bland Hoke.  I believe art is a catalyst for change. My work is focused on creating awareness of waste, while proposing creative alternatives to it’s open-ended cycle.  Up-cycling is the process of converting waste into a product of greater value. The term was coined in the book, 'Cradle to Cradle: Remaking the Way We Make Things' by William McDonough & Michael Braungart. I stumbled across this concept in the midst of questioning the purpose and function of art in society. Up-cycling has provided a moral and practical outlook on material use and sculpture.  I strive to create a symbiotic relationship between a producer of waste material and the resulting work of art. As a catalyst for change, this approach to material use is beneficial in exhibiting the creative possibilities of discarded resources."

The web site also has this to say about the sculpture:  "Sheer Bliss Cable:  One half mile of retired lift cable from the Sheer Bliss Lift on Snowmass Mountain, reused structural steel.  11 Feet Tall, 37 Feet Long, 9 Feet Deep."

A Snowmass Sun newspaper article of September 3, 2008 about this sculpture is quoted below in the section following the photos.

Photos of the sculpture are below.  The last photo is of the artist Bland Hoke visiting the scupture on March 31, 2009.

If you have information about or photos of this item that you would like to share for use on this page, please send to the author at AspenShrines@aol.com.

The photos in this section are of the sculpture when it was at the bottom of the Sheer Bliss lift. 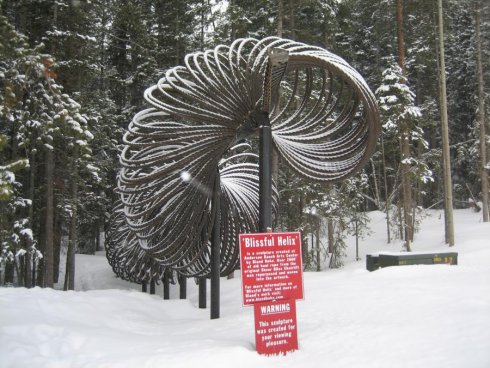 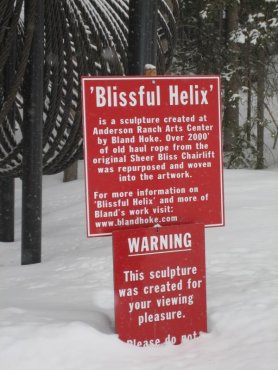 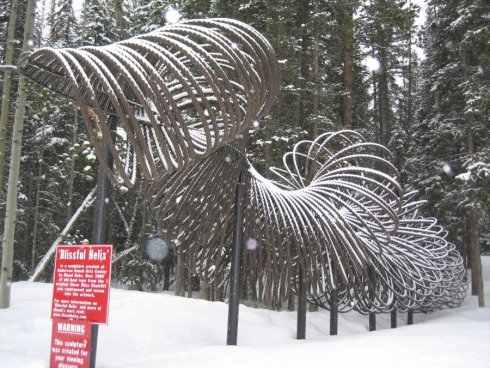 Photo credit for this photo: www.blandhoke.com 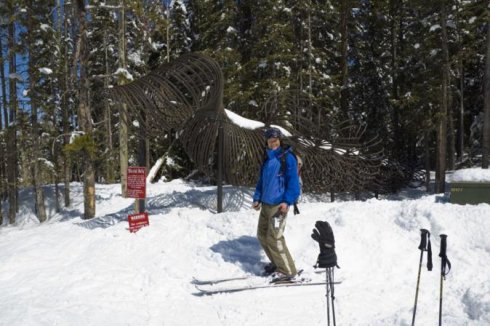 Photo credit for this photo: http://www.blandhoke.com/blog.php

Sometime before November 2011 the sculpture was moved to a location near the bottom of the Coney Glade lift.  In this section are some photos of it in this new location.  A "For Sale" sign was also added to it.  The asking price is said to be $30,000. 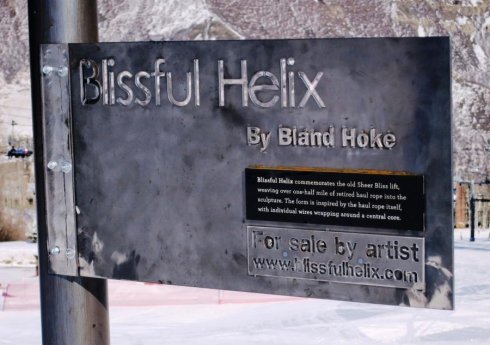 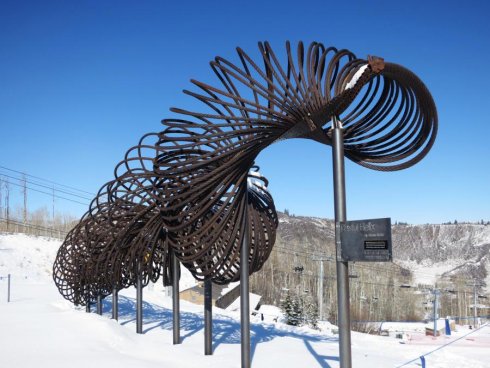 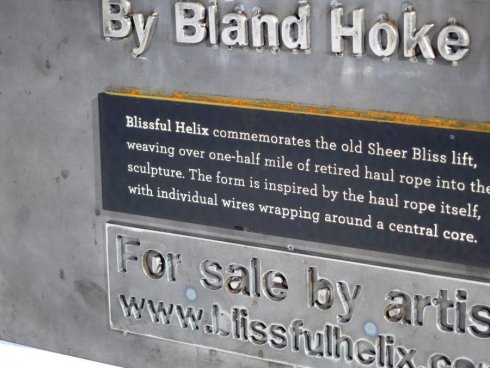 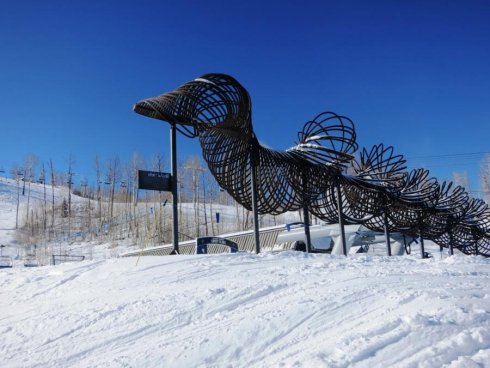 September 3, 2008
What’s the best use for a half-mile of chairlift cable that would otherwise be sold as scrap metal?

For artist Bland Hoke, an intern at Anderson Ranch Arts Center, those thousands of yards of cable (known in the industry as “wire rope”) live on as a sculpture that’s temporarily situated on upper Fanny Hill, within a snowball’s throw of the Timberline.

Appropriately enough, the sculpture is called “Sheer Bliss.” It could be considered an homage to the now dissembled double chair serving the Big Burn that’s in the process of being upgraded to a quad. Little, if anything, is left of the original lift, as the higher capacity chairs require modern mechanisms that can carry far heavier loads.

Absent its sale to another ski area or recreation area – the Naked Lady chair will have a second life in Lutsen, Minn. – lift parts often have little value other than scrap.

The artist stumbled upon some spools of old wire rope in May as he was flying down the mountain on a sled and decided to ask ski area manager Steve Sewell about their reuse. Sewell thought about it for a millisecond and then agreed to donate some of the rope for the project.

“I’m thrilled Bland approached us about it,” said Sewell.

A native of Jackson Hole, Wyo., and holder of a fine arts degree from Alfred University, Hoke said he first became interested in cable-as-art when the Jackson tram was dissembled. “I’ve had this idea brewing for a couple of years,” said Hoke, a lifelong skier. The artist said he became further intrigued about reusing existing lift materials after a reading a Snowmass Sun story about Naked Lady’s next life.

That he should stumble upon the raw materials from Sheer Bliss during a sojourn on the hill is fortuitous and coincidental – if you believe in coincidences.

The sculpture – which uses about four tons worth of the cable – came to life this summer at Anderson Ranch with the help of Matthew Fischer, the studio manager for painting, drawing and critical studies, sculpture department head Doug Casebeer and studio manager Jason Speich. Comprised of eight different sections, “Sheer Bliss” utilizes trailer hitch materials to hold the pieces in place. While the assembly took about 12 hours, the actual welding “took a long time,” said Hoke.

Standing beside the sculpture on a hot late August afternoon, the artist offered that “it moves in a linear direction.” Indeed, the coils seem to have movement within their otherwise static borders.

Hoke went on to note that “some people connect with it.” Others, meanwhile may not necessarily “get it” but are quick to offer their interpretation as what the hefty sections of wire seem to be saying. Some claim it has a butterfly feel. Steve Sewell half-joked that “it sort of reminds me of what my fishing reel looks like sometimes!”

In all seriousness, Sewell opined that “it’s really a neat use of salvaged lift parts.”

Where “Sheer Bliss’” future lies is not known – situated in the middle of a ski trail, it will most certainly have to be relocated when the snow flies. Sewell wants to see it moved somewhere so skiers and riders can perpetually view it: “It would be great to see when the snow starts piling on it.”

For his part, Bland Hoke would like to complete a similar installation at another resort: “The ability to recycle material and sell it as art is awesome,” he said.
https://www.aspentimes.com/news/snowmass-artwork-is-sheer-bliss/ 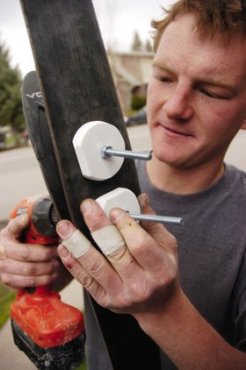