This obituary for Bill Kirkwood was published in the Orange County Register on May 25, 2008.

Kirkwood, H. William "Bill", a long time County of Orange, retired senior manager, Bill Kirkwood, 81, died at his home in Huntington Beach on Wednesday, May 14th 2008 of a rare and fast-moving neurological disease, Creutzfeldt-Jakob disease, of CJD. He was a World War II veteran, having served in the Navy air force in the South Pacific. After the War, he enrolled at Hillsdale College in Michigan where he earned a degree in History. Bill began his nearly 30 years of service with the County in 1960 as a Right-of-Way Agent with the Dept. of Real Property, where he organized the first property management division. In 1964, Bill became the Administrative Services Officer for the Orange County Public Library System and for more than a decade played a leading role in shaping its growth by initiating the computerization of the libraries cataloging and acquisitions inventory, by developing its first facilities master plan and by publishing a history of the library. Bill was selected as Director of Administration of the newly formed General Services Agency in 1977 and guided it through the perilous years after the adoption of Prop 13. In 1985, Bill was appointed as Assistant Director of GSA/Waste Management Program, were he reorganized the new department, supervised fiscal long range planning and developed a state of the art automation system for the new Bee Canyon Landfill. Bill found his career with the county fulfilling and was always community service minded serving as President of the Uptown Lions Club twice while with the County, and was Coordinator of the County's charitable campaigns for several years and served on many other committees. He retired in 1988. Bill continued his involvement with the County after his retirement through membership in the Retired Employees Association of Orange County, REAOC, and served as President for more than ten years. He has also served as volunteer treasurer and president of the California Retired County Employees association, CRCEA. He was in his sixth year as president of CRCEA at the time of his death. Through his knowledge and leadership of retiree issues Bill has been an important source of help and information to the local retiree associations throughout the state. His endeavors have contributed to the wellbeing of countless retirees. Bill was an expert snow skier. He loved the sport and skied 30 to 40 days per year. He was an active, vital man who also loved playing duplicate bridge. He and his wife of 32 years, Carol, had a fabulous trip to Egypt and Jordon in February. Bill is also survived by his four children: Chris, Scott, Karen and Cindy and their mother, June, step daughter, Karen and five grandchildren. He will be missed by his family and many friends. A Memorial Service will be held June 14th at the Seagate Clubhouse in Huntington Beach. In lieu of flowers, donations may be made to the CJD Foundation or your favorite charity. See: http://www.legacy.com/obituaries/orangecounty/obituary.aspx?page=lifestory&pid=110400386

Many thanks to Cindi Kirkwood for sending the author the following information about her father, for use on this page:  "Ralph Jackson introduced Bill and June Kirkwood on July 4, 1952 at a private cocktail party in Aspen.  Bill proposed to June that first night and they were married 6 weeks later in Denver.  They lived in Denver for several months and when they met Stuart Mace at a show in Denver, Bill knew his next adventure was to drive the dog sled teams at Toklat with Stuart.  Bill and June lived at Toklat for several years with the Maces operating the Lodge.  Isabel and June worked together preparing the meals while Stuart and Bill took the guests out on rides with the dogs in the spectacular Castle Creek Valley.  Bill had wonderful stories of his time spent with Stuart when they worked on the huts and trained the dogs.  During that time, Bill also climbed Mt. Hayden.  Christopher, their eldest, was born at the old hospital in September of 1953.  Bill was interviewed when Stuart was entered into the Aspen Hall of Fame and remarked that Stuart Mace was the greatest of mentors for a young man.  The Kirkwood’s moved to Lake Arrowhead, California prior to the birth of their second son, Scott in 1955.  There wasn't a day that Bill did not remember and think of his days with his family living up Castle Creek.  It was an amazing life for a young man of 26.  Bill loved Aspen and came to visit almost every year."

A photo of the memorial is below.  It is located on Aspen Mountain near the 1 & 2 Leaf run.  Click on the imgage to enlarge it. 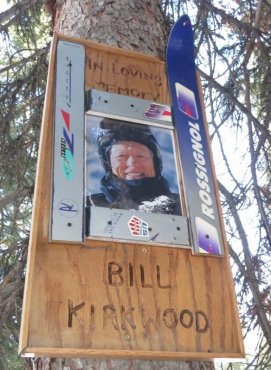 There is also a memorial for Bill's son, Scott, adjacent to Bill's memorial.  See the photo below showing both memorials, and see this page on this web site for the Scott Kirkwood memorial:  http://www.aspensnowmassshrines.com/index.php?The-Scott-Kirkwood-Memorial-Aspen-Mountain 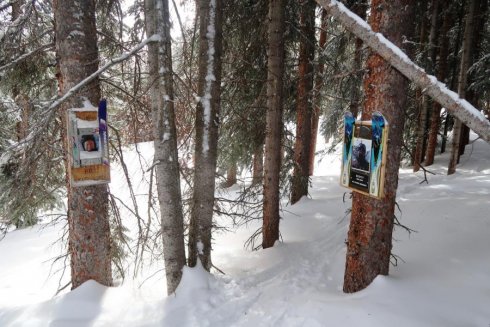