The Barbara Isakson memorial plaque and bench (“Barb’s Bench”) is located near the Ullrhof mountain house at Snowmass.  Photos of it are below; click on images to enlarge them.

Many thanks to Bill Worden, Barb's son, for supplying the information in this paragraph about Barb and her bench!  Barbara Worden moved to Aspen in the early fifties, from Milwaukee, with her husband Euclid, who was a member of the Aspen ski patrol.  She had a knitting shop in Aspen in the mid 50’s.  After a divorce, she married Kenneth Isakson in 1956.  He was a local cabinet shop owner and a former Tenth Mountain Division ski trooper.  Over the years she had many jobs, typical of Aspen working folk, which included: Carls Pharmacy, Kalmes clothing (Bill Bullocks), and Ozzies shoes. Later she worked at several Mountain restaurants, including Gretl’s, Freddies, Sam’s Knob, and finally the Ullrhof, where she spent 17 years.  She was the Kitchen Manager for the Ullrhof, owned by John and Pat Drake.  During her tenure at Sam’s knob, she was very proud to be the only female to operate a snowcat on the mountain.  She often drove the supply cat up in the early morning, and returned after the mountain closed.  Other times she skied down.  She continued to operate cats, from the Ullrhof, especially later in life as her health deteriorated.  She was also very proud to have the only private parking space on the mountain; as a victim of severe degenerative arthritis, she had become partially handicapped.  The space was designated with her name on it by the ski company and placed in an easily accessible spot near the Snowcat garage, at the bottom of the mountain.  In spite of her handicap, and the constant pain, she was always remembered with a smile on her face, and as a rousing team leader at the Ullrhof, where many of her employees would chant "ba ba rah!" She passed away suddenly, on November 2, 1998, at the age of 65, at her home in Basalt.  She had just decided that due to her health, she was going to have to retire. She dearly loved the mountain, and all the people on it, customers, ski patrol, instructors, and fellow employees.  Her memorial bench was made from Colorado flagstone, and hummingbirds and columbines were carved into the bench, as she loved them both, having them in her garden in Snowmass for many years.  The bench was set, with the cooperation of the Ski Company, and the Drakes, in the summer of 1999. It was set by her three sons, and one foster son, her granddaughter, daughter-in-law, and John, Pat, and Bill Drake. A fitting tribute, she was toasted with Dom Perignon, as she admittedly had a “champagne taste, with a beer budget.”

See the author's Facebook photo album of this bench at the following link (you do not need to have a Facebook account in order to view the album):  https://www.facebook.com/media/set/?set=a.690393364365964&type=1&l=0a0843df59
If you have any photos of or information about this item that you would like to share for use on this page, please send to the author at  AspenShrines@aol.com. 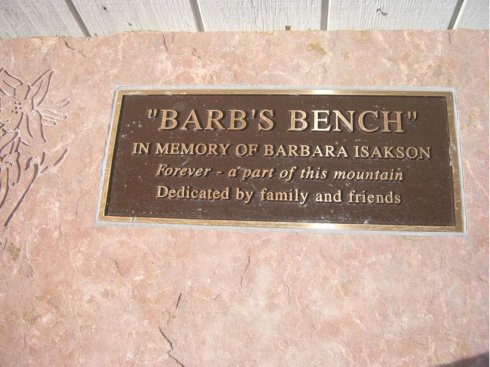 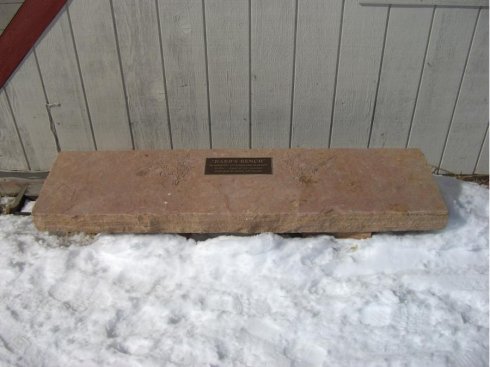 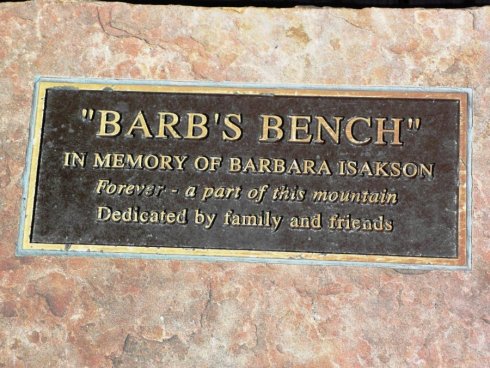 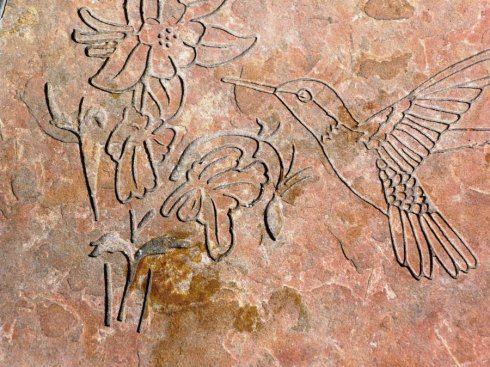 Columbines and hummingbirds are carved into the stone. 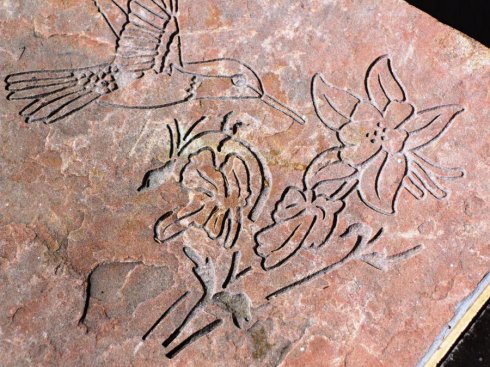 Many thanks to Barb's son Bill Worden for supplying the three photos below. 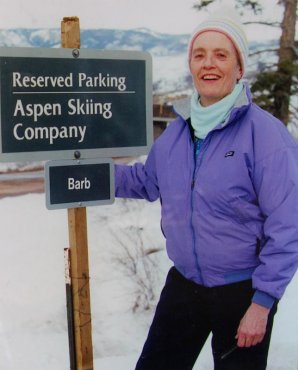 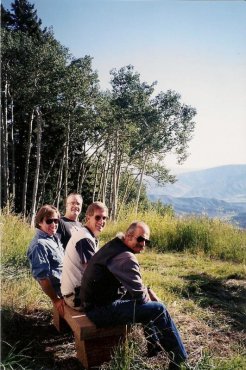 Barb's sons the day the bench was set. 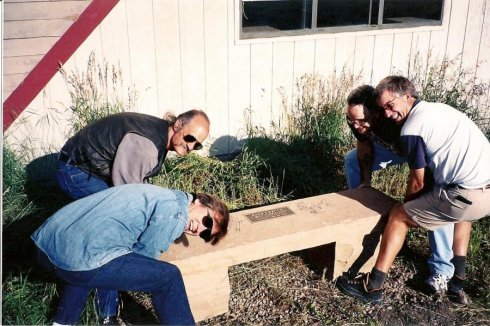