The Aspen One Monument (Aspen Mountain)

This monument on the top of Aspen Mountain carries the name of each owner of an "Aspen One" watch.  These owners' names are carved into one of three cut boulders located on the back side of Aspen Mountain.  See below for the names that have been carved into the boulders so far.  These cut boulders are on the Black Diamond Load and within 50 to 100 feet of the lunch cabin that is used for the snow-cat powder tours offered by the Aspen Skiing Company.  The watch is made by Aspen Jewelry and Watches.  Since the elevation of the monument is 3,267 feet from the base of Aspen Mountain, the watch has been issued in a limited edition of 3,267 watches.  One feature of the watch is that it has a 4:00 PM alarm, reminding wearers to switch from the watch's ski strap to its apres-ski strap.  Orange is the color of the number four on the dial of the watch, which in the tradition of the Ute Indians, indicates prosperity, and it would be later known to represent mountain safety.  Four is also the time that Aspen Mountain closes its lifts, marking the time for apres ski.

The first watch was presented to model and entrepreneur Elle Macpherson who then donated it to Challenge Aspen and the Aspen Valley Ski and Snowboard Club (AVSC).  For more information about the Aspen One watch, see these two pages on Andy Israel's AspenSpin.com web site: http://www.aspenspin.com/journal/2009/2/24/aspen-the-watch.html and http://www.aspenspin.com/aspen-the-watch/.  See the Aspen Times article of February 28, 2009, "Mountain Mayhem--The Essence of Time," by May Selby at https://www.aspentimes.com/news/mountain-mayhem-the-essence-of-time/ This article includes many photos, and also notes the significance of the launch date of the watch — exactly 20 years to the day after Swedish skier Ingemar Stenmark won a giant slalom race on Aspen Mountain, the last victory in his ski racing career.  Also, see this article from the Aspen Daily News of January 19, 2009, by Troy Hooper:   "Watch Pays Homage to Aspen Mountain"  https://www.aspendailynews.com/watch-pays-homage-to-aspen-mountain/article_067ee464-e6f4-5cb7-a65a-bccbbf3c3577.html

See this Facebook page for Aspen Jewelry and Watches: https://www.facebook.com/pages/Aspen-Jewelry-and-Watches/396314013769421?ref=stream.

See this video http://www.youtube.com/watch?v=3BFA_ufyJzQ which shows Rene van Ass ("CEO of Aspen Jewelry") discussing the watch.  This video was shot in England.

Also, see this February 24, 2009 article from the Rocky Mountain News by James B. Meadow:  "Not Only Wristwatch, a Rich Watch"   Here is a quote from this article:

"Timing, as they say, is everything.  But in Aspen you could say that timing is everything - plus an additional $38,900.   Which leads us to the Aspen One, a nifty new watch that debuted last week in the tony mountain hamlet.  And if you wonder who would introduce such a pricey watch when the economy is schussing downhill on a black-diamond run, the answer is Rene van Ass.  The Dutch-born entrepreneur is the force behind the Aspen One, a Swiss-made bauble that is part timepiece, part "homage."  In a recent interview in the Aspen Times, van Ass explained the logic behind his creation this way:  "There is always room for new initiatives. By sitting and shaking, you will not create any more change. If you do nothing (the economy) will get worse."  Yeah, right, is the reaction of Aspen authority Mary Eshbaugh Hayes, who has been writing about the town's social scene for more than a half century.  'I think it's kind of ridiculous to come out with something like that when everybody is hurting, says Hayes.  Does that mean she won't be purchasing one?   'I wear a Mickey Mouse watch.  Does that answer your question?'  You might be curious about what makes the Aspen One so upscale.  Well, for one, it comes in four color combinations featuring 18-carat white or rose gold.  For another, it's not just a watch.  According to Kenny Smith, owner of Aspen's Meridian Jewelers, the exclusive Colorado retail outlet for the Aspen One, the watch has a hinged case which you can "flip" to reveal a "liquid- filled compass."  And not just any compass.  You see, if you're standing atop of Aspen Mountain and orient your compass-watch to the north, you will be able to locate other ski areas - Buttermilk, Snowmass, even Vail, - because they are engraved on the watch's bezel.  Wait, there's more. Smith says the watch has a "highly developed user-friendly strap-changing system."  This means it comes with two separate straps - an "athletic" one made of "durable calfskin," and a dressier "apres-ski strap" of crocodile.  Plus, the straps attach to the watch "like a boot clicks into a ski binding."

As of August 2011, names have been carved into only the middle boulder, and there are 11 of them:  Ben Mandemakers, Edwin Ouwerkerk, A. J. De Wilt, Maikel Ouwerkerk, Jos Van Moorsel, Angelique van Ass, Jan Martens, Bron, Aris, Patrick Van Zuiden, and Dean D. Niro. All are listed as being from the Netherlands, except for the last one who is listed as being from the United States.  Also the middle boulder contains numbers starting with 1436 and ending with 2121.  Nothing is carved into the left or right boulders.

If you have any information about, or photos of, this item that you would like to share for use on this page, please send to the author at AspenShrines@aol.com. 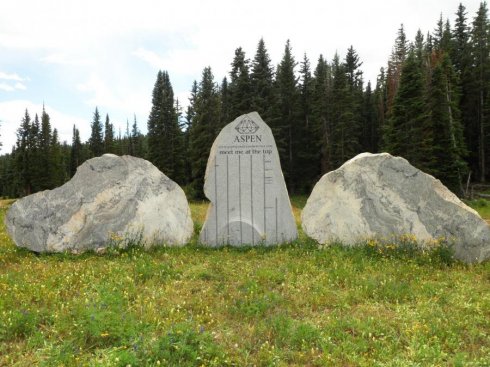 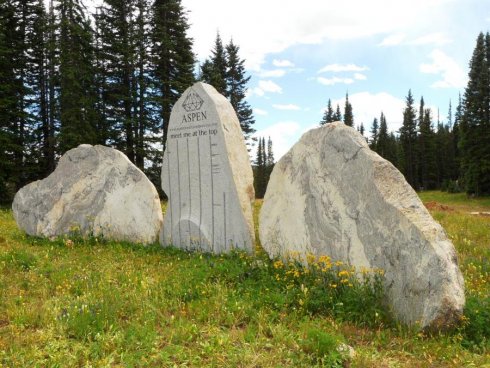 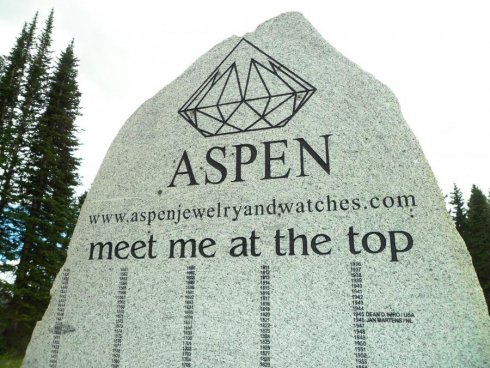 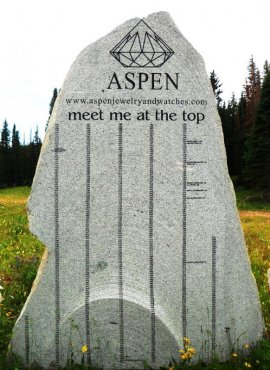 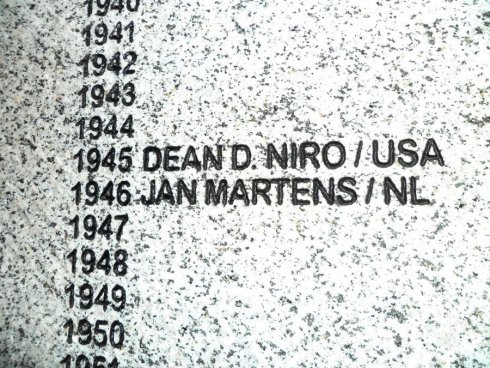 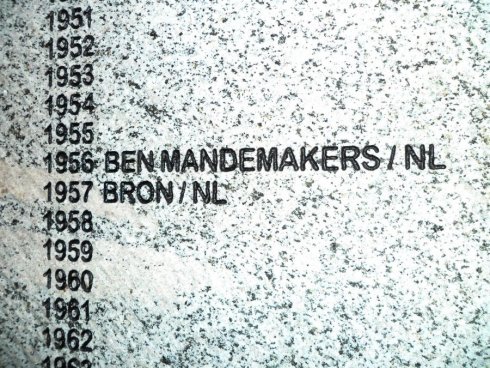 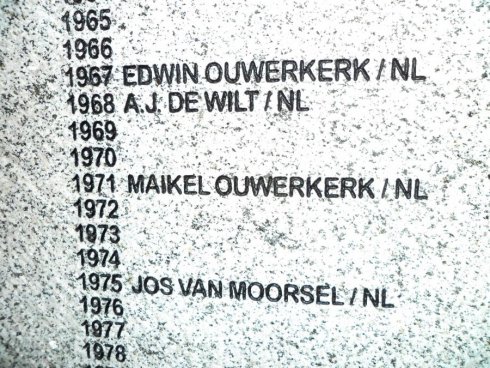 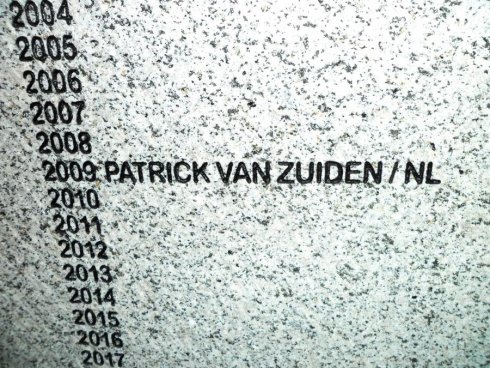 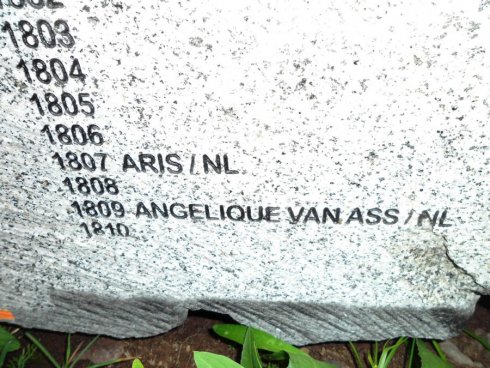 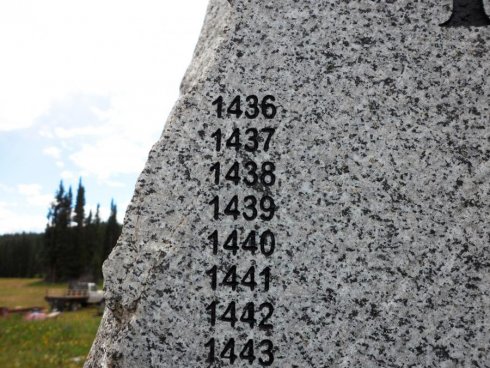 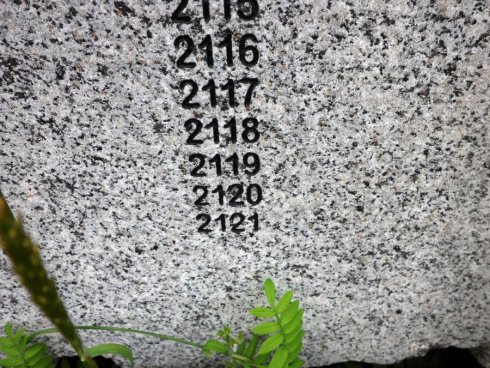 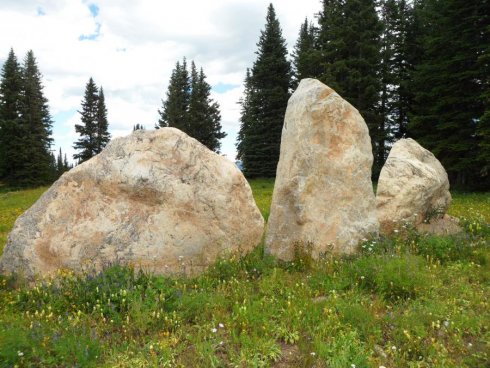 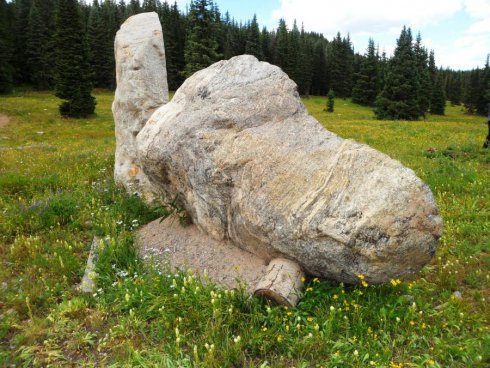 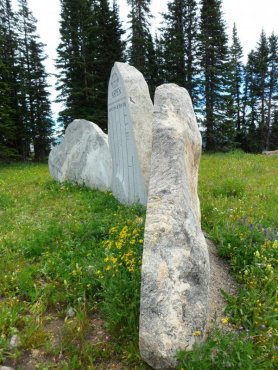 The photos shown in this section are of the Aspen One watch, and were taken in January 2013 at Meridian Jewelers at 525 E. Cooper Ave. in Aspen. CLICK ON IMAGES TO ENLARGE. 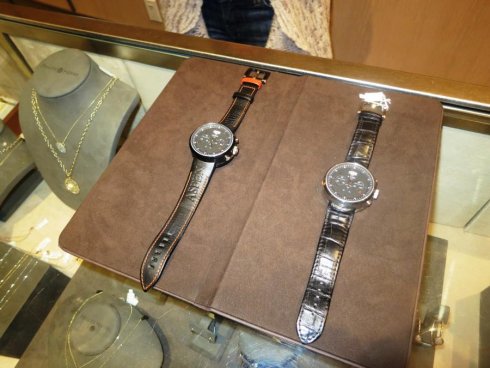 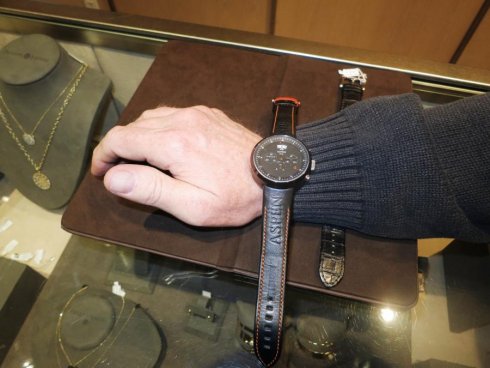 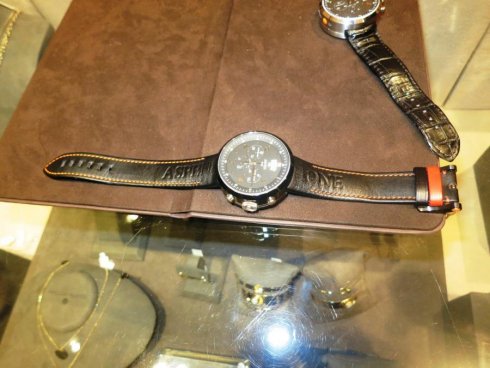 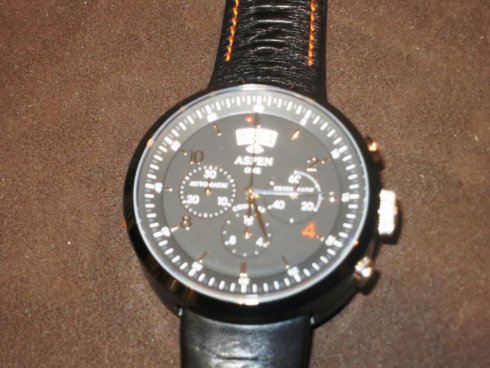 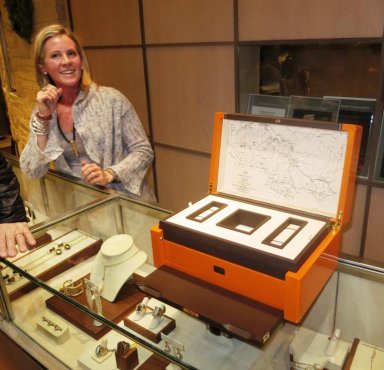 The photos in the section below were taken in August 2016.  They show a few things:   That the right boulder has fallen over (while the other two are still standing); that there are still only 11 names carved into the middle boulder (the same number as existed in 2011 when the photos above were taken); and that it appears that an attempt has been made to scratch out the name of Patrick Van Zuiden. 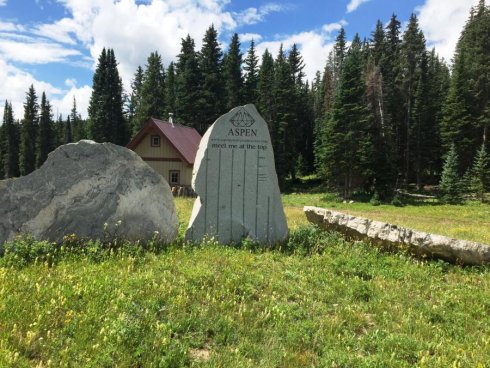 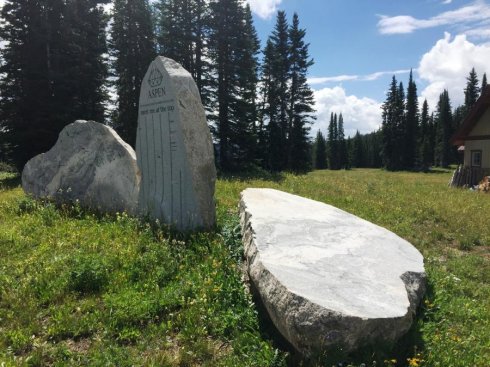 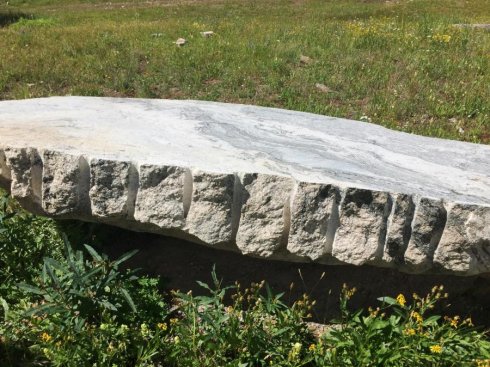 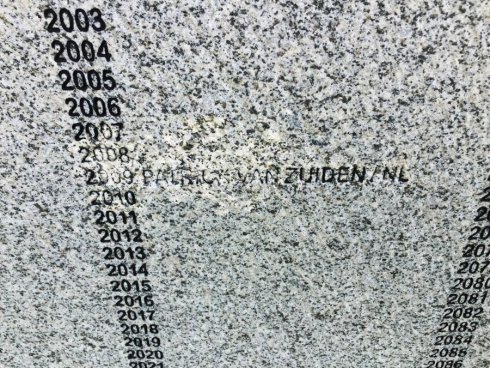